I haven’t delved into the world of free roaming environments and worryngly inconsequential violence since GTA4, so when Prototype came through the door, I was feeling a mixture of excitement at the thought of having a new city to explore (and do damage to) and trepidation at the thought of the game turning out to be Spider-man with people’s heads falling off. There’s so much to take into consideration with these games; you need to have an interesting world to explore, varied and substantial game content to keep the player interested, an interesting twisty story ticking along and a few new ideas that sets it apart from the rest of the pack.

While I wasn’t going into Prototype expecting the next GTA4, I certainly had high hopes for a game that seemed to be hitting the right notes in pre-release. So was this a successful Prototype, or do Radical Entertainment need to go back to the drawing board?

A tale of one man and his parasite
Prototype is a free roaming platformer/beat em up hybrid with some minor RPG style character upgrade thrown in to keep things interesting. You are placed in the shoes of Alex Mercer, a man who wakes up with the ability to change his body into any shape he wants, jump incredible distances and take bullets without much of a fuss. He also wakes up in Manhattan with no memory of his previous life, which you’ll spend the majority of the game uncovering.

The game has a pretty solid foundation for what could be a very interesting story. An amnesiac with inhumanly destructive (and awesome) powers wakes up on a surgeon’s table, and sets out to find out about who he is, how he’s capable of such feats of power and who is trying to hunt him down at every turn. Unfortunately, the narrative that’s built on top of those foundations is about as structurally sound as a papier-mâché scaffold, with sugar paper draped over it. Maybe that’s a touch harsh, but for most of the game, the plotline, characters or cut-scenes rarely venture above being half decent. 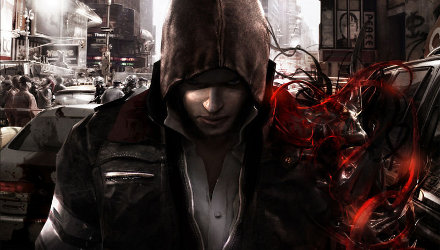 Man I look broody. Hey everybody! Come see how broody I look!

The main problem is the way that the story is told, every mission usually starts with a CGI cut-scene showing Alex talking to an unnamed soldier in the present day, talking about what’s gone on for the last two weeks. These scenes are visually impressive, but very short and really don’t do anything apart from set up the next mission. Don’t expect to uncover any shocking revelations. The scene will then flash to a point in the past, which is where you gain control of Alex, where you can either roam around the city doing your own thing, or head straight for the mission start point.

Once you reach the mission start point, an even shorter cut-scene is triggered, usually involving Alex’s sister Dana giving you the next direction to head. These scenes are over so quickly that they never involve any kind of character development and do very little to flesh out the back-story behind the game, although they aren’t helped by the appallingly hammy dialogue. The voice acting for the most part is actually pretty well done, but it’s the script itself which really drags most of the scenes down. Every line spoken by Alex is so similar to the last that you stop caring about what he has to say pretty early on. In particular his conversations with his sister Dana follow a very strict formula:

*Alex walks into the room, Dana is sitting at her PC.*

Dana: Hey Alex, have you seen this <event or person> on the news? Maybe you could find something out there that could help you find what’s going on.
Alex: <event or person>? This <event or person> could be the key to uncovering my past/getting revenge/saving <person who needs saving>, and I’m going to find out everything they know/stop them before it’s too late.

It’s clear that the scriptwriters were going for the broody, introverted anti-hero angle with Alex (I imagine other character names like Logan Dark and Sinister McMurderchops were banded about before they settled on Alex Mercer), and you have to at least admire their consistency, but it gets very boring after a few missions, trust me.

The actual story really doesn’t have that much in the way of content either, apart from the moment that you discover Alex’s true nature, there really isn’t all that much to keep you riveted. Don’t expect any plot-twists or unexpected revelations, because there’s none to be had. Which is a real shame, considering the developers were essentially working with a clean slate here, there are very few restrictions if even your protagonist doesn’t know who he is.