Watching daredevil motocross drivers on big bikes hurl themselves up big ramps, and twist their bodies around in impossible postures while flying through the air can be quite exhilarating. Doing it yourself is much less appealing to most of us. Doing it on a console from the comfort (not to mention relative safety) of your favourite gaming chair is a much more attractive proposition… unless that proposition comes from Red Bull X-Fighters.

Red Bull X-Fighters is a real-world freestyle stunt competition for motorcross drivers, and is considered one of the most prestigious in the world. It brings together some of the best riders from across the globe, who compete to pull off the most daring and death-defying stunts. The game follows the same formula with you, the player, starting from the very bottom and then working your way up, by pulling off one insane stunt after the other to earn your place in the rankings.

Flying high!
There are several events to compete in around the world: Race Tour, Red Bull X-Fighters World Tour, World Record and Tour Stops. Doing well in these events earns you points which unlock new bikes, new outfits and access to new races. Race Tour is the simplest of them all; here you just have to get from A to B as fast as possible. The Red Bull X-Fighters World Tour is all about pulling off as many tricks as possible, while World Record has you going for the highest and longest jumps possible. World Record feels like a bit of a last-minute addition because unless you have unlocked a really powerful bike, you have no chance of completing any of the jumps.

Tour Stops is the most gratifying of the events, because it mixes in elements from all of the others. This shakes things up and requires you to adapt to different driving styles from race to race. This, again, requires a little bit of strategic thinking in terms of what bike to use. Should you go for high acceleration or high top speed? Reading the level is key to making that decision. Steep ramps require a high top speed, while smaller ramps will require stronger acceleration. Sadly, you have no way of knowing that until you’ve actually been out on the track. 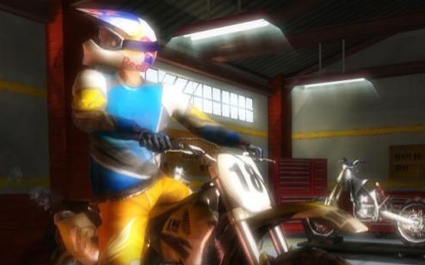 'Can I get this in lime green?'

When you finally get out to the track, you will find that gameplay is cut right down to the bone. Everything is focused on doing stunts and tricks. You don’t need to worry about keeping your balance, steering the bike or hitting the ramps at the right angle. The game will do all this for you, so all you need to do is throttle-up and pull off a few winning trick combos.

That’s easier said than done though. Because everything else is so simple, you can forgive the game for asking you to hit some pretty insane button combinations to pull off a trick. Tricks come in two forms: one-shot and sustained. Some are simple to pull off, requiring just a simple button press or two. More elaborate tricks require you to press several buttons, so you can imagine the chaos when you try to string together several tricks before hitting the ground.

Sometimes you might not manage to pull off a trick at all no matter what you press. There is a strange ‘grace period’ of a second or two after you’ve left the ramp and gaining air where you can’t do anything. Your rider will simply not respond to anything you press.

The chaos multiplies as there is no trick database to refer to while racing, and it’s really hard to keep them all in your head, especially since many of them use shoulder and face buttons at the same time. All too often you end up performing a one-shot when you really wanted to do a sustained trick, or vice-versa. Sometimes you might panic and pull off the same trick twice in a row just to do something, but this is less exhilarating the second time around and earns you less points.

Because of all this, there is a lot of trial and error involved, often resulting in a humiliating crash or simply nothing at all. It’s especially frustrating if you catch some big air and don’t manage to pull off anything cool. Part of the problem is that there is simply no logic to where the tricks are located on the controller. It would have helped if one type of trick was executed using only shoulder buttons, another type using only face-buttons while the more death-defying ones would be a combination of all of them. 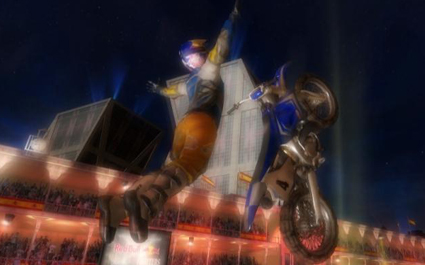 The design of earlier levels even works against you, by simply not offering you enough high jumps to perform tricks, especially the sustained ones that require a long airtime to really pay dividends. You might get to pull off a quick one-shot trick if you are lucky, but these are the exception rather than the rule. Later tracks have you high-flying in no time, but you have to put in the effort to get that far and chances are you will have lost all interest by then.

Colourful boasting
Just like the sport itself, the world of Red Bull X-Fighters is a colourful one to be sure. The races take you across the world to arenas in Mexico, Giza, London, Rome, Madrid and Moscow. This offers quite the thematic variety in the tracks themselves and is a nice touch. However, even with fireworks exploding all around you when you fly off ramps, the game still looks quite average at best of times. On top of that, there are some surprisingly long loading times between tracks for a game boasting simple graphics like these.

Elevator rock!
The average looks spills over into an average sound as well. The music is your typical elevator-style rock that sets the mood but does very little else, and the announcer has a very limited repertoire of comments.

Rolling off the ramp
Red Bull X-Fighters is not a bad game as such, nor is it exactly poorly put together. It’s just not very enticing, innovative or indeed very interesting. Apart from  the occasional thrill of landing a particular difficult trick, it won’t have you jumping or screaming with excitement. Everything in Red Bull X-Fighters simply gets very boring and underwhelming after a while. There is very little depth to be found here, and the game never really goes flying off the ramp as much as it slowly rolls of it. If you really want to experience the thrill of Red Bull X-Fighters, you’d be better off flying off a real ramp on a real bike yourself… or just buying tickets to one of the events instead.