Birds are one of nature’s most sadistic creatures. Thanks to Angry Birds, the small feathered creatures have come across as angry and volatile psychopathic maniacs prone to violence and mayhem.

Rocketbirds: Hardboiled Chicken, a 2D side-scrolling action game with big chicks tooting big guns, does little to dispel this gloomy perception. In fact… it revels in it!

Son of Rambo
By ‘big chicks’ I mean the poultry kind, and no one is bigger then Hardboiled Chicken, an elite super-soldier who looks like the unfortunate result of Rambo’s boozy night out in the local farmer’s hen house. Your mission is simple: kill the evil dictator Putzki, and liberate the oppressed people of Albatropolis from the oak of the totalitarian Penguin regime. Not the most original of plots, and there is little point in paying much attention to the who, the what or the why, as Rocketbirds: Hardboiled Chicken is all about shooting. 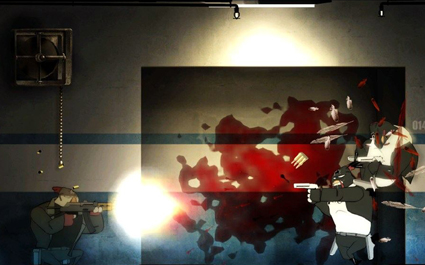 Blood, guts and feathers!
Arriving on the scene via a rocket strapped to his back, Hardboiled Chicken must infiltrate various military facilities and unleash hell in a fury of blood, guts and feathers. Subtlety and stealth is for wimps; Hardboiled Chicken has no qualms over unleashing hails of bullets against the enemy Penguin soldiers. Armed only with a powerful handgun to begin with, his arsenal quickly expands to include shotguns and various machine-guns, and every gun packs quite a punch. Bullets will rip into the enemies’ bodies and fling them up in the air, while blood and feathers splatter over the walls. Enemies are quite tough; even your basic grunt won’t go down with just one bullet, so ammunition is not to be used sparingly.

The various corridors where most of the action takes place offer very little in terms of cover, and Hardboiled Chicken can only take so much punishment before biting the dust. Soldiers often attack from both sides at the same time, so the trick is to fire short bursts in each direction to knock enemies to the ground and prevent them from firing back, until you can deliver the killing shot. This is easier said than done, and a bit of an awkward way to play a shooter. Hardboiled Chicken is not very agile and can’t jump or dodge to save his life, meaning you can’t move out of harm’s way or duck behind cover.

Occasionally, you will be able to flatten up against a wall and let bullets whizz past you. This makeshift cover-mechanic is rather awkward at best because of a rather finicky control scheme. Overall the controls are precise and responsive, but to flatten against walls you have to hit the triangle button. Simple enough, but to shoot you first have to exit cover, shoot and then enter cover again, which isn’t very intuitive and a very roundabout way of doing something that should be very simple.

The action is interspersed with simple puzzles that often require you to find the correct keycard to open the right door, to get another keycard that opens another door, and so on. More mundane tasks require you to push boxes into the right places, while others are more elaborate and require you to hypnotise enemy soldiers and use them for your own ends.

As Hardboiled Chicken makes his way deeper and deeper into Putzki’s strongholds, he eventually meets members of the local resistance that give him a box of brainbugs. Throwing these small critters against enemy soldiers gives Chicken full control over them, and lets him get in to places that might be inaccessible otherwise, or attack unsuspecting soldiers from behind.

Most of the game is spent on the ground, but on occasion you get to strap a rocket on your back for some high-flying action. These moments, although brief and far between, offer some of the best thrills of the game, as you zip around the sky sending waves of enemies crashing to the ground while avoiding bullets and missiles. It’s during these sequences that the game truly lives up to its name, so it’s a shame there are so few of them. 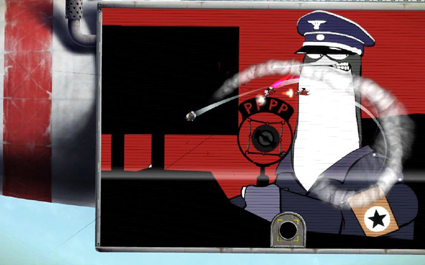 Funny looks
The game mixes a funny concoction of traditional 2D characters with highly detailed 3D backgrounds, which gives it a very unique look. The world of Rocketbirds is a bleak one, and looking past the quirky-looking birds dressed in military uniforms, the various military bases look like something out of your typical military shooter. This sets the perfect tone for the game’s action, and is further underpinned by funny little details like propaganda posters and the occasional humorous sign. What little story there is gets told through 2D cutscenes with some pretty dodgy voice acting, but this actually complements the ridiculous premise rather than subtracting from it.

Tweet-tweet, chirp-chirp!
The atmosphere is further enhanced by an efficient sound design that conveys the perfect amount of oppression and military might when appropriate. The music comes courtesy of rock band New World Revolution, and their up-tempo nu-metal rock songs (although seemingly a rather strange choice at first listen) fit the game perfectly.

Band of budgies
If life as an elite soldier-chicken becomes too lonesome, you can also tackle the game in local co-op. Here you choose from an assortment of hard-as-nails budgies with different weapons and abilities, who have to work together to bring down Putzki’s regime.

While the band of budgies are quite charming, they are also quite limited, as none of them can change weapons. They simply stick with what they come armed with, which is a shame, as scrambling to pick up any big guns or loot left behind by enemies could have added a little bit of friendly competition between players. The budgies also don’t get to experience the thrill of the high-flying rocket action, which is very disappointing, as this could have mixed things up in co-op even further. 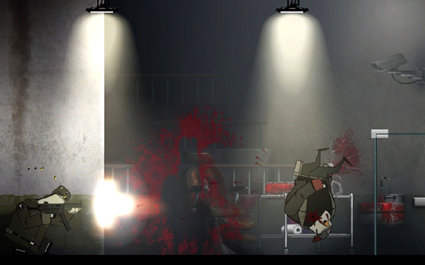 Who are you calling ‘chicken?’
Rocketbirds: Hardboiled Chicken is not a deep or profound experience, nor is it the perfect overall package. The gameplay is quite shallow, the puzzles don’t really offer any challenge and there isn’t much variety in what you do and how you do it. Yet none of these things prevent it from being an enjoyable game, if you are prepared to look past these shortcomings. It doesn’t aspire to be more than just a fun and overall well-made shooter, and a loving homage to the 2D shooters of old that inspired it, and in that respect it succeeds. It oozes stylistic charm and certainly has enough good things going for it for anyone to give it a try, simply because there is something here for all to enjoy.