I have to say that as an avid rugby supporter of many years, I’m very excited by the Rugby World Cup 2011 tournament. Being a Welsh boy, and having a team this year who had a good showing in the Autumn International matches, there’s added interest for me. After all, my country stood one of the best chances out of the Northern Hemisphere sides to move their way through to the knock-out stages.

However, I had mixed emotions when it came to the game version of the tournament. The version I played was on the Xbox 360 (of course, other game consoles are available). This was not a reflection on the idea of a Rugby World Cup game, but more because its predecessors had not managed to do as good a job as I had hoped. So, the burning question is, did this version live up to my not-so-high expectations, or blow them out of the water?

We know that there haven’t been many Rugby games which have captured the imagination of gamers. Even horse racing games have had a more successful run than egg-chasing. For a time, it seemed like development houses had given up on them altogether, as they’ve been notably lacking this gen. It’s been four years since the last Rugby Union game, after all.

It’s surreal to me as a fan, because it’s an incredibly popular sport, and has only grown in popularity over the last few years. There’s a massive target audience being missed out, for sure. Unfortunately, that does put an uncanny amount of pressure on Rugby World Cup 2011 to perform.

The good news is it offers more customisation than many of its predecessors. There’s a player editor mode; although, it’s noticeably lacking when compared to the likes of FIFA and Smackdown vs RAW.

There are also four different mode types included in the game. The tournament mode which I’ll talk about in more detail later; International Test, one-off friendlies that allow you to play any team, anywhere; the Warm-Up Tour where you take one team, and take them on a tour to a different hemisphere; and the Place Kick Shootout, where two teams can go head to head in a shootout.

You can also play any of the teams currently competing in the World Cup. Just in case you were wondering… 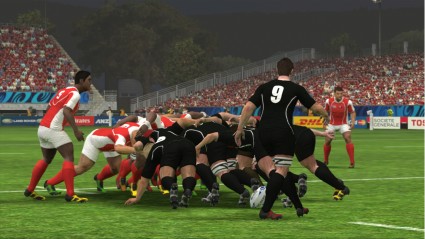 Bread of heaven
Now, an admission. Actually, two. First, I very rarely read game instructions thoroughly. A quick once-over for the basics, and then I find the combinations as I go, which to be fair, usually does the trick for me.

Second, of course I knew I wanted to play as Wales in the main tournament; that was a given. However I didn’t go for Wales first off, as I wanted to get to grips with the controls and didn’t want my boys to get turned over because I hadn’t mastered the buttons yet (I know, I know). So, I marched into a friendly with Canada; no reason why, other than the fact that they played in red too. I hadn’t played with any altered settings, just the defaults of an easy game setting and 5 minutes halves, against South Africa.

I think it’s safe to say that Canada (and by association, me) were massacred by the Boks.

Clearly, admission number one above meant that I had no idea how many different things you were going to be required to do, in order to complete even the most basic moves on the pitch. Aside from the one button you needed for line-outs to wither the front, middle or back, I never managed to secure any possession.

I know that I should have read the instructions in more depth before playing the game; I can’t really argue with that. However, this is a game for those aged 3 and up. If you can’t plug and play a game, younger children won’t be able to play it at all. It’s not a ‘jump obstacles and watch the Lego bricks smash apart’ kind of title. Yes, I realise that in reality, rugby is a complicated game, but I really stood no chance. It was a whitewash. So I then wondered if the game was more geared towards older players.

Realising my mistake of ignoring the instructions, it was back to the booklet. A more comprehensive read through, and I was then off to a tour of the Southern Hemisphere, playing this time as my beloved Wales.

I am pleased to say that this time there was a much more positive outcome. Thankfully I was much better now, and beat the likes of Tonga, Fiji and Samoa; quite comprehensively I have to say. As a result I unlocked the real tests, against South Africa, Australia and the mighty All Blacks. However, now it was actually too easy. I marched through every game, all wins, and didn’t really get challenged at all.

I have to say, this was a bit disappointing, but it was made up for with the fact that Wales had beaten every team in the Southern Hemisphere!

Full of the joys of these results, it was on to the World Cup itself, playing the actual listed games from the group stages. This meant that Wales’ first opponents were the South Africans, then Samoa, Namibia and Fiji. True to form, I lost to South Africa by a point (the very definition of art imitating real life), but romped through the rest of the games, as Wales have done. 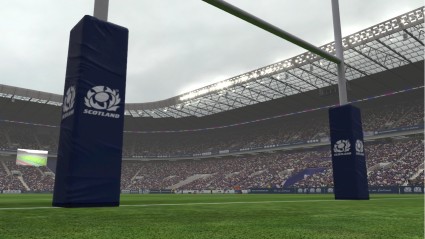 Interesting screenie? No? Actually no.

Then it was on to the quarter finals, the semis, and then a final against England (I know, I couldn’t believe it either). There was only one possible result; it was Wales 47, England 22.

There was only one thing for me to do now: play it again from the beginning, but this time change the defaults to medium and the halves times to 10 minutes. Very disappointingly, and slightly worryingly, the final composed of the same teams and the margin of victory was also around the same (a lot of you are wondering how both England and Wales are making the final, and to be honest, me too!).

So, hard settings and 20 minutes a half were set, and I am disappointed to say that not much changed other than Wales’ opponents, who were actually the All Blacks this time. Still, it was Wales who lifted the cup.

It all became too predictable. Certain set moves worked well in the easy settings, and I thought I’d have to work a hell of a lot harder in the medium and hard settings to break the gain line, but no. Basically, if Mike Phillips got the ball out to Jamie Roberts fast enough along the line, you broke the centre pairing every time. A flick pass to Shane Williams, and off you went under the posts.

As for the kicking aspect, there’s no real challenge to this either. It’s all a matter of timing. Line up the strength of the kick and the direction according to the wind, and you’ll score guaranteed points. I think I missed once, but that was because I was dived on by my 6-year-old when I wasn’t expecting him!

I think it was after this third spectacular victory for Wales that I lost the will to carry on any further. I’d put a few hours into the game and given it the benefit of the doubt for a while as I really wanted it to be good. It just isn’t. I don’t really think that it’s all the game’s fault, either.

Rugby is not an easy a game to play, either on the pitch or on your console. This is why previous attempts have fallen short. There’s too much going on, and it involves too many decisions in a split second to play it effectively. A knock on from this (excuse the pun) is you always feel like you’re miles away from the play itself, as you need to see the whole width of the pitch.

It is definitely the best attempt at a rugby game that I have played, but I still prefer the old rugby Subbuteo (does anyone else remember that, with the rugby ball-shaped scrummage machine; awesome!).

Some of the set play pieces are hard to control with any confidence. Wales seem to consistently lose the ball at the line-out (imitating real life again in this respect you could argue), in any difficulty setting unless you throw it long. In which case, Ryan Jones comes away with the ball, out to James and Jamie, on to Shane and a try is scored (as above).

Scrummaging is also a mess. Though, I have to say that the thing that infuriated me the most was that you could punt the ball out of play from anywhere on the pitch, and it was given as a throw-in to the opposition. This, to any rugby fan, is not how it works outside of your own 22. Could they really have not taken on board all the IRB rules and regulations before completing the game? Terrible. 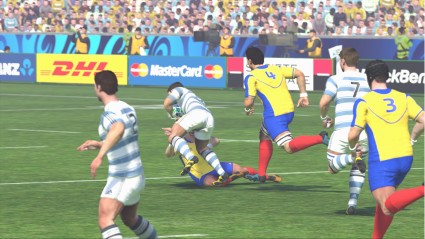 Get in the scrum, boyo!
In its defence, the game looks great; all credit to HB Studios on this front. However, when you see how much effort has gone into rendering the individual players in FIFA 12 (which I still feel uses the wrong shaped ball), it’s a letdown that they didn’t try and do the same here. The players all seem to be variations on a theme, and look nothing like their real life counterparts. Considering that the Rugby World Cup is billed as the third-largest world sports event, there could have been more time spent here. I expected to see James Hook up-close-and-personal when the cut-scenes played for kicking duties, but no joy there I’m afraid.

TRRRRRRYYYYY!
Before you start the match, there is a choice of which set of commentators you want to listen to. I have to say in terms of commentary that Stuart Barnes’ commentary was as annoying in the game as it can often be in real life, so I chose Sean Fitzpatrick who somehow managed to achieve the opposite position in fact; he was much better!

Other than that, the sound effects are all a bit limited; the crowd sounds very muffled when responding to you. Even the sound of the boot hitting the ball is all very tinny and clinky. It’s all a bit disappointing, I’m afraid. 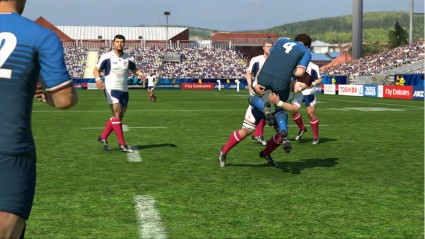 Glory, glory, Rugby Union!
All the modes you can play offline can also be played online. However, it is a limited selection when compared to other online experiences out there. Generally, it took me a long time to find a game, which tends to suggest that people have already deserted the game to go on to other things. Even when I did get online, it’s not particularly stable or interesting.

A shame really; they could have done so much more here. A bit like the rest of the game in general, all in all…

Try harder?
RWC2011 is not really a game that I would go back to. There are a few games that I will happily play in a quiet moment, complete and then delete the data and start it all again. Not this one.

The Webb Ellis trophy has been won and put away until 2015, when it starts all over again. However, while the trophy will see the light again then, this game sadly won’t. I can only hope that its yet-to-be-released brother in 2015 will do a much better job.