Golf is viewed by many the way it is referred to in the titles for the BBC comedy programme ‘Mock the Week’: officially dull. I’ve never agreed with this, mostly thanks to my Great Auntie Evelyn who was a massive golf fan when I was a nipper. My other Great Auntie, Olga, and I used to annoy her by sitting either side of the TV, flinging paper air-planes with messages written on the wings across her line of sight while she watched the golf, until she gave us both what-for!

I even got quite into playing it as a young man, and was pretty good, but unfortunately golf can be an expensive sport and I never pursued it any further. This is a long standing regret I intend to rectify in a few years time, when my son is old enough to come and play a round or two with me.

So, how to fill that golfing void in the meantime? Enter stage left Mr Tiger Woods and The Masters course in Augusta, Georgia (pause for applause).

Driving on the range

I love The Masters. I lose a lot of sleep to it over several days every year, and it’s my favourite golf event. So to actually be able to (virtually) play the course was too tempting an opportunity to miss.

The first order of play was creating my own 3D avatar to use in the game. By registering online with EA Sports, you can upload photos of yourself, one from the front and one from the side, and then create your gameplay avatar so it looks like you on-screen. I have to say, it’s not a bad representation of me; what do you think? 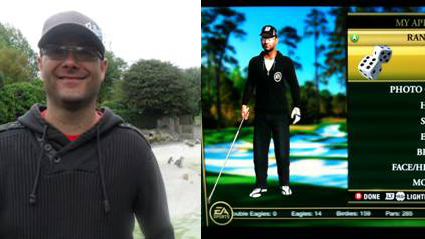 So once you’re all set up and looking good (insert your own put-down here, thanks), it’s gameplay time. You need to work your way through various challenges, sponsor challenges and then course events to gain XP, in order to better the performance of your character. As well as this, you have to move up the golf ranks in order to earn an invitation to actually play in the Masters itself.

Once through the amateur leagues, you proceed on through the Q School to get your pro status. Then it’s on to a number of tournaments on a wide variety of courses around the world, as you earn your way to that prestigious invite to The Masters. There are 16 courses on the game disc, but another 20 that are available as downloadable content. This was a little annoying, as if you don’t want to play in events you haven’t downloaded, you have to skip them and you lose ranking places as a result (grrr..).

You can skip a bit of the tournament play if you want to, by completing ‘The Masters Moments’ challenges. Here you get to recreate some of the most famous shots and performances by golfing legends over the years, such as Jack Nicklaus, Larry Mize and Phil Michelsen. These are good fun, and some of the shots are tricky if you’re playing in professional mode, but still worth a go. 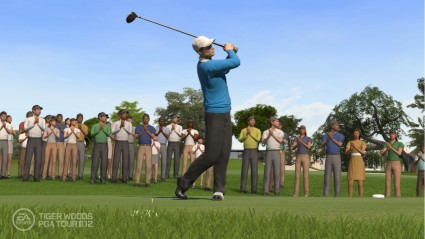 Caddy-lack?
From what I’ve read about previous games in the series, the actual gameplay itself hasn’t evolved that much, aside from there now being an ever-present caddy who’s there to guide you through each hole. His experience in assisting you increases as you complete your bronze, silver and gold mastery of the various courses.

Of course, you can switch him off, but otherwise his job is to assist you in club selection and provide a number of options for various shots on the holes in play. Luckily you can customise your own shots, as sometimes his suggestions before your course mastery improves are not that great (I learned that the hard way, after several trips to the trees, bunkers and ponds littered around the various courses).

The controls are excellent. The analog stick is used to swing the club and your dexterity and judgement does the rest (along with your thumb). Of course, you can follow the caddy’s recommendations and do well, but the skill comes in when you choose your own club, shot, take into account the wind direction, and really attack the courses by yourself.

Possibly the hardest part of the controls is the putting, which in the pro mode can be more of a challenge. This is definitely an area where being able to pull out of a shot by letting go of the analog stick pays off. Sometimes, any lack of concentration can put your ball on a massive gradient away from a hole on the more challenging greens, giving you a lot more work to do. A steady hand is definitely required on the greens. 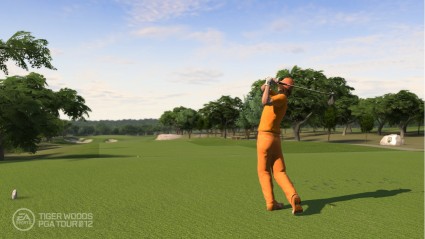 This is Rickie Fowler, not Big Bird. Honest.

You can even see Tiger Woods sweat… if you’re into that kinda thing…
The first thing you notice when playing the game is the attention to detail; it’s beautiful to look at. The videos are smooth, and the feel is just right for the event it represents. There’s a nice little introduction to the Masters course, where you play the final hole as Tiger, to win the tournament. This is just to spike your interest a bit, you understand.

One thing that is a little off-putting within the game is some of the goings-on in the crowd. You see, there’s this guy. He’s there in the gallery along the tees quite often… just there. Not doing anything… not being a distraction at all; the model of decorum. But he’s there! Occasionally he just likes to stand amongst the gallery or on the edges of the greens, and wave frantically as you try and putt. Very helpful, indeed…

Tiger Woods PGA Tour 12: The Masters was never going to push the boundaries of what your console can do, but it doesn’t need to. The game doesn’t need the complexity that is L.A. Noire for instance, but simply needed great gameplay, and this it does have.

FOOOORE!
Going back to our good friend the caddy, his comments are, shall we say, a little repetitive after a while; and if he’d told me that he ‘has confidence in me’ one more time, I’d have sacked him!

The other ‘speakers’ in the game are the commentary team of legendary American Sportscaster Jim Nantz and David Feherty. Nantz is an instantly recognisable name in the world of golf and his addition to the game is awesome. However, the comments, once again, become repetitive after a while; a greater variety of witty one-liners would be welcome, or maybe even Peter Alliss (wishful thinking, but maybe for the next game perhaps EA?).

Virtual fore!
A Tiger Woods game wouldn’t be complete without an online mode, and this year brings with it the controversial EA Online Pass. You’ve probably already made your mind up about whether you love or hate that, so for the purposes of this review, I’ll just tell you what The Masters does offer you. 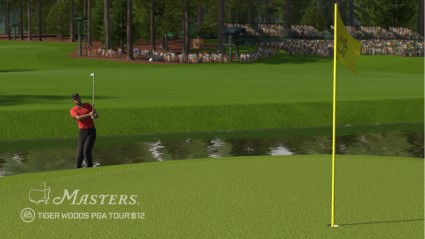 I'm going to be classic and avoid an obvious Tiger Woods 'Ho in one' gag...

You can also take part in ‘Play The Pros’, a mode that replicates weekly PGA Tour events, and allows you to compete against actual scores set by PGA Tour players. While you may feel speculative about how this works, I can tell you that the scores update almost instantly.

Another excellent feature is GamerNet. This is a mode where players can save their long drives, putts, and trick shots etc., and it will be up to you to beat the challenge that has been set. So, for example, you may have to play a full round and get three holes in one. They’re all individual challenges, set by players around the world. This is a great mode, and one you can lose a lot of time on.

Soar to success?
If you hadn’t guessed, I love this game. The gameplay is simple yet enjoyable, and the controls are very user-friendly and responsive in professional mode. You can even tune your clubs to your own individual style; quality!

From reviews I’ve seen about the previous games, this version takes some of that previously disjointed feeling that existed and puts everything together, to create a game that you want to play more of. This is largely due to the career progression, which works extremely well.

I am so glad that they finally made a Masters version of the Tiger Woods franchise. I have played it for many, many hours, doing exactly what real golfers do at 6.00 am every Saturday morning. Simply whiling away the time and enjoying the challenge of a beautiful course, without actually having to lug the clubs around with me! Result!