Back when I was a kid, holidays meant camping or going to the beach. Like any gamer, wherever we went I made it my business to seek out any and all arcades within walking distance of the campsite or holiday park. Lucky for me, British beaches are jam-packed full of the things and I spent all my money on countless games of Tekken, Street Fighter, House of the Dead, Silent Scope and Outrun. One game that I always had a crack on, wherever I was, was Sega Rally Championship. Offering short, exciting races with a rally twist, it became a staple favourite in arcades across the country and is on many veterans top 5. Why do I bring this up? Well Sega have seen fit to rip this classic out of its cabinet, doll it up for the HD generation and slap it on Xbox LIVE Arcade for all to play under the moniker Sega Rally Online Arcade. Wishful thinking or shrewd business move? Can a 15-year-old arcade port make modern, money conscious gamers part with their hard-earned cash? Let’s find out…

Like any good port Sega Rally Online Arcade (SROA) retains all the charming simplicity of its arcade mother while adding new features to keep in line with the times. Along with the original Championship mode, there’s a tea break friendly Quick Race, the ever addictive Time Attack and a cute Classic mode.

The basics are simple; drive around a track. While there are a number of cars on offer, the differences are negligible, I assume in the interest of fairness. Some are quicker off the starting block, others start slow but have the top speed to close the gap later in the race. Handling wise I noticed little difference across the board, with the drivers skill being the obvious game-changer in that department.

Talking of skill, little is required when playing on your own. While the AI cars rarely make mistakes, they don’t often take the quickest line through corners, instead ambling about the track like hopped-up drunks. Despite this lack of ability, I wouldn’t say SROA is an easy game. Your opponents go like a bat out of hell and your only opportunity to pass is on shifty corners, or by harnessing your top speed and slipping past on long straits. Luck plays an irritatingly large part; miss a cornering opportunity and you can be stuck in place for an entire lap. Putting this aside, the control is true to its roots. Simple accelerate and brake controls set up a loose and easy to learn driving mechanic. A few squeezes of the brake will get you round most bends; the only time deceleration is really needed is on hairpin turns. This is both a blessing and a curse; newcomers will find it easy to pick up but limited in depth, and rally veterans will find their cornering and braking skills count for nothing.

The camera can also be an issue. Only three views are presented; front bumper, over the bonnet and the standard back of the car. While the first two are as normal, the third is much too low. Some of the cars have high roofs, limiting your view, and when opponents are kicking snow or dust in your face it soon becomes impossible to see anything.

Around the World in… Four Tracks?!
Snow, dust and sand. These are the three surfaces you’ll be driving on. Oh, and tarmac. SROA offers a miniscule four tracks to race on. While this is in keeping with the arcade original, it’s doubtful it will be enough to keep people playing regularly. I played for half an hour and managed to race three of the tracks six times each! It gets old very quickly and feels like a cop-out. The fourth, illusive track can only be raced by first winning a championship.

This is basically the three tracks in order. You begin in 22nd place and must reach first place after all three races to qualify for the fourth. Your finishing position at the end of each is carried over to the next, in a bizarre sort of stop-start race. I see the reasoning behind it, but if you’re quick enough you can mess around in the first two races and clinch the win by driving hard in the third. After trying numerous times to reach the fourth track I finally did, and let’s just say it’s not really worth it. 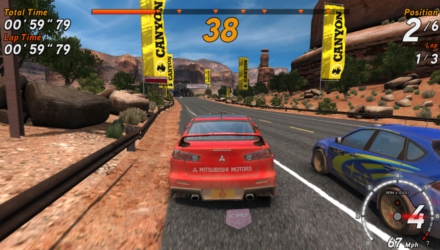 Not as thrilling as it may look...

Quick Race picks a random track out of the first three and sticks you into a three lap race. Time Attack offers a little more variety, allowing you to race against Sega staff member’s ghost cars as well as those of the top players around the world. Like most comparison modes this results in a feeling of inadequacy as you’re left quickly in the dust. You can also just give it a shot yourself, which is nice, but with the constant knowledge that you’re still not good enough to hold a candle to the world’s best, it essentially becomes a race with no opponents. It’s not even like you have to learn the tracks; they’re short, few and there’s even an arcadey voice telling you, rally style, which turning is up next. Classic mode allows you to quick-race a couple of classic rally cars, which will be familiar only to rally fans from the nineties.

The chief issues here are longevity and suitability. After a few whips through Championship mode testing out the cars, a quick go at Time Attack and a curious look at Classic it becomes abundantly clear that SROA is designed for short plays. Only the most dedicated or bored would sit for hours going round the same few tracks over and over. I doubt even die-hard rally fans will stay long. The lack of realism is the biggest element missing, eschewing much possibility of a life-long fan going ‘Oooohhh, the Toyota Celica ST205! What a beauty!’ and driving it about for days on end. There just isn’t the depth to maintain extended play here, which is a huge detriment to a game that will forever sit on your hard drive.

Old Dog, new coat?
One this SROA does have on its side is looks. Updating the graphics was a necessity; few people would pay a premium for an ancient-looking game. The blocky cars and angular trees etched into the minds of many a gamer have been replaced with the sleek bodywork and rustling flora that we’re used to seeing in the HD generation. The original was lauded on its use of varying surfaces and people wowed at the cars kicking up dust and dirt, tyres getting muddy and tracks getting scored with tread marks after just one lap. While it was a technical feat back in 1995, these days its standard practice and SROA does it with the bare minimum of care.

Overall, the graphics are up to scratch, looking nice and shiny on my 720 telly. Unfortunately this creates another vacuum. nostalgia hounds will be disappointed by the update, crying that ‘It’s not how I remember it!’ with some right. Newcomers will be uninspired by the basic models and cookie-cutter textures. Oh dear.

Sounds like a lawnmower
Sound-wise SROA again sits firmly on the fence. I can’t remember exactly how the cars sounded back in the day, but I’m pretty sure they sounded better than this. The Ford Focus sounds like an angry lawnmower, the Impreza like a washing machine with a brick in it. Ok, so maybe I’m being a little harsh, but in the arcade, sitting in that chair, surround-sound speakers blasting in your ears and your mates screaming around you, it sounded a whole lot better.

The music is typical arcade rubbish; a sort of mix between The Fast and The Furious OST and some underground industrial techno club in Soho. In other words, bloody annoying. For a few heady minutes in the arcade it’s ok; catchy enough to pump the atmosphere but forgettable enough to leave your head as soon as you leave the chair. Rammed into an Arcade title however it becomes a splinter in your head, constantly looping over and over and over and over. My advice is to turn it off in the options and put on your own music, if only for the sake of your basic sanity.

Left in the dust
The one big addition to this update is Xbox LIVE support. If you could call it that. SROA allows you to race against up to fifteen other people in, you guessed it, a Quick Race. Same tracks, same cars, same turns. The only difference is the people, or it would be if there were any online. I write this review just under a week after SROA was released and in an entire day of play I managed to find one game; with one person in it. The same person preceded to pan me for ten straight races. With this sort of welcoming committee I can see SROA multiplayer lasting about as long as Mini in hurricane. 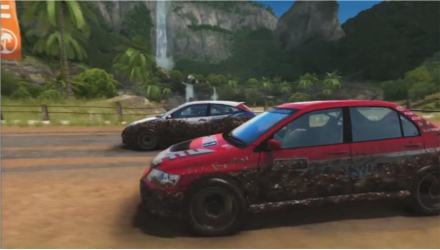 Mud on the car! SO REAL!

It’s one salvaging factor, the one thing that just might drag this poor excuse for a multiplayer out of the Mini/hurricane analogy is the inclusion of something that has become rare in today’s internet age; sofa multiplayer. Local Head to Head Multiplayer mode lets you and a willing friend battle it out for first place. Wow! The same issues apply to this mode as the others, only now you’ll have a friend in the room to moan with.

You came in last place!
Some of you may think I’ve been a little harsh over this short review. Sure, I’ve ripped it a new one, but I’ve genuinely tried to find good points. The conclusion I’ve come to is this…

Sega Rally Championship should have stayed just that; a rickety, beloved cabinet in the corner of a dingy, overpriced Blackpool arcade. At least then it would have the nostalgia factor. The memory-awakening feeling of that tough, plastic seat, that flimsy wheel and the stiff gear-stick. The pounding speakers just inches from your eardrums blasting the sounds of a race that never ends. Your mates cheering and laughing, drawn into the game by the spectacle, the music, the excitement. A day out at the beach.

What we have here is the technical skeleton of Sega Rally Championship. Its heart ripped out and dashed to the side. It looks the same (save a coat of paint), sounds the same, drives the same, but it doesn’t feel the same. Sitting alone in my bedroom I feel nothing for it. The one thing that I guess Sega were banking on, their one main selling point is absent. Just like every aspect of its build, SROA resides in a terrible void. Too new and shiny to be true nostalgia, too outdated and heartless to be a fresh title. I’m having a hard time coming up with a reason anyone would play this for more than five minutes. 800MSP is about 7GBP right? That’s at least five or six solid races down my local with my mates. I’m off to have some real fun…