It’s not like we’re unfamiliar with this certain species of hedgehog anymore. Sonic’s been around the block so many times now that it’s a huge shock when someone asks who Sonic is. “Who?!” I may reply, my voice struck with disbelief. “You disgust me!” I’d probably add.

Yes, Sonic’s been on pretty much every console, and he’s not afraid to admit it. Like the video-game swinger, he’s not alien to ignoring when his games get released either, so here we are, looking at a(nother) Sonic remake. Déjà vu? I don’t blame you.

So, what was Sonic CD?
This time we’re taken back to 1993 with Sonic CD, which was released for the Sega Mega CD. Probably re-released just after Sonic Generations as the two games deal with the manipulation of time. However the remake of Sonic CD made me realise one thing, which is how far ahead of itself it is. Feel free to nod off while I bring the youngens up to date.

Sonic has taken Amy to the Never Lake, where it is rumoured a planet known as the Little Planet arrives one the last month of every year. However upon arriving, it’s apparent that Dr. Eggman is up to his old tricks. Blast him!

He’s covered the fabled planet in metal and chained it to our own Planet, in the hopes of turning it into his own base. Not only that, but he’s created Metal Sonic, who kidnaps Amy. It’s up to Sonic to rescue Amy, defeat Eggman, save the day, and still pass up any hints that Amy makes. Seriously.

Spin, Sonic, Spin!
The game starts off as any Sonic game has done; in a zone that vaguely resembles the Green Hill Zone, where Sonic travels through at super speed to reach the goal. Reach the goal of two zone areas and you get to face what Eggman has in store for you in that zone. Beat Eggman, and you continue to the next.

This is basic Sonic knowledge, right? However CD comes with a nice twist. Throughout the game there are posts that look similar to the final goal posts marked ‘Past’ or ‘Future’. If you hit these whilst running through the level, then keep running at a high-speed for a few seconds you will travel backwards or forwards through time, depending on the one you hit.

In the past, there will be a generator hidden somewhere in the level which you can find and destroy. Once you have done that, you can return to the present to continue with the level. With a destroyed generator, many of the levels threats will be gone, making the run through easier. Not only that, but complete both zones with their generators destroyed and you’ll face an easier boss.

This mechanic is what makes Sonic CD interesting. Not only does it allow for more puzzle-solving fun, but the method itself is one still used in today’s games, something that means levels won’t be static. Granted, the process has developed and changed since then, but Sonic CD set the foundations for an element that was well advanced for its time. 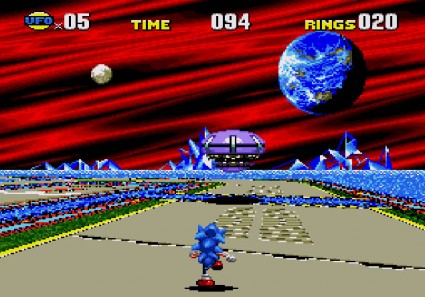 I'll be honest, the UFOs baffled me...

Special Stages make a return, as long as you hit the goal with 50 rings or more. The Special Stages in this game take form in a 3D-like arena where UFOs are meandering around, as well as traps, bouncing obstacles and water that reduces the time you have. Destroy them all to earn a Time Crystal, which allows you to change the time. This means you can face the Easy boss without destroying the generators in previous zones.

On top of all that, the remastered version comes with a few new tweaks. The Spin Dash feature has been implemented into the game, allowing players to feel at home with Sonic. Also, after completing the game once with Sonic, it allows you to replay the game through with Tails, who possesses all the traits (new and old) that Sonic does, as well as his trademark ability to fly.

Achievements! Playing the 360 version, I was able to unlock a few, including one for time travelling called “88 Miles Per Hour” which if you don’t get, then I r disappoint. The game boasts a full 12 achievements, the two of which I managed to unlock were worth 5GP each. Don’t expect to break the bank there, then.

It’s not exactly Van Gough, but it gets the job done.
While ‘remastered’ may refer to an updated game that may have some graphical improvements, this isn’t the case for Sonic CD, and rightly so. The game is still in its Mega CD glory, including the interestingly unnecessary video to open the game, showing Sonic tearing through terrains at breakneck speed (with Amy nowhere in sight, which is interesting).

While some people may have been looking forward to an HD version of the game, it’s nice to revisit the classic’s pretty much exactly as they were. No amazing HD graphics and detailed environment. Just good, old-fashioned Sonic; the way the game should be.

Amy doesn’t speak in this one. Thank heavens…
Sonic CD has one of the most interesting sound histories in game history, originally having two different ones, one for Japan, one for the United States. Given that they’re the only two countries listed, I’m not sure what the rest of us got, but both of them are available for selection here.

Unfortunately without the originals at hand it’s hard to compare whether they’ve seen any refinement. Either way, the soundtrack the game uses keeps the usual Sonic feel, along with the generic sound effects of Sonic’s jumps, spin dashes, coin loss etc. Nothing out of the ordinary here. 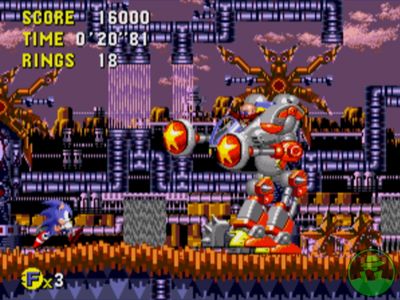 A definite blast from the past…
At the end of the day, what we have here is classic Sonic with very little changed. All that’s been modified are aspects that make the game smoother and easier to play, as well as one or two nice, additional extras. However, that’s all it is, classic Sonic.

Through the hype, people may feel like they were receiving an entirely new game, possibly a HD remake of the original game, much like the Sonic game that was released via 360 Marketplace and PS Network earlier this year. They’re not.

That doesn’t mean that it’s not worth the download, it’s definitely an exciting trip to the past and a great way for people who either missed the game, or were too young to play/remember it to grab it and give it a play. Just don’t expect anything too amazing, like Sonic Generations. Go in to the game embracing the fact it’s old school, and you won’t have a problem.

For the cheap download price, it’s most certainly worth the buy to check out the interesting time travel mechanic that allows for a unique challenge in a Sonic game, but if you have a back catalogue of the old school Sonic games, then you should be able to give it a miss.