Hands On: Kingdoms of Amalur: Reckoning

I realise this is something I’ve been running into the ground recently, however it’s only because it’s true (and I’m slightly excited): 2012 is full of big hitters. Huge hitters. Games that will blow our socks off, find them, put them back on and blow them off again. As such, there isn’t any room for games that aren’t going to pull their weight, who aren’t ready to push gaming to the limits.

While I was excited about Kingdoms of Amalur, my previous point applies, unfortunately. Having been able to play the game for the better part of two hours recently, I was met with a decent, enjoyable game, but I wasn’t left feeling Amalur deserved a spot on our shelves this year.

Starting the game had me feeling at home, with the standard RPG storyline of wars, heroes and dark gods, with battles that have been going on for centuries. There isn’t anything out of the RPG comfort zone here, things that I’m more than familiar with. Throughout the beginning story, you’ll be told that you’re actually dead before you’re asked to pick your Race (a list of oddly named species), your God (another list of odd names that ultimately determine your stat bonuses), and then it allows you to personalise your face before flipping back to the story.

Being thrown down a chute into a pile of dead bodies, the story begins. The dark creates a dark essence, through dingy caves and gruesome body piles. The graphics took my attention straight away, allowing for really interesting and unique designs, but there’s something that doesn’t quite hit it on the nail.

Whilst what I was playing was enjoyable, and lets me get lost in a new world, it feels like it can’t quite make up its mind, whether it wishes to create a realistic or fantasy feel. The combination is definitely achievable (Final Fantasy hits it on the head many times) but Amalur seems to flit between the two. 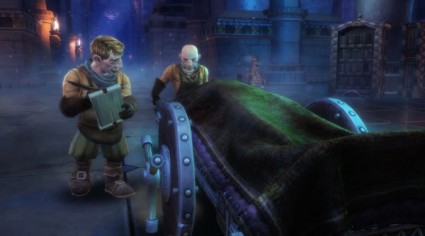 The sound, on the other hand, is bang on. Players will feel immersed and at home as creepy tones accompany you through the darkest of dungeons, and the lightest tunes will keep you feeling happy as you skip through the streets.

The combat system is solid, allowing for involving sword play and archery, however also allowing magic users to jump in the fray and get some nice hands on action rather than being bench sitters firing from afar. This is done through the use of Staffs, which is essentially a close combat magic sword. As a dude who prefers magic, this was a god send.

One thing that did come to mind, however, is that it felt like I was playing a reskinned Jak and Daxter game. This may be because I’m a lover of the series, and the lack of anything from Naughty Dog allows my brain to turn the slightest Fantasy-Adventure into visions of Jak and Daxter running around lovely green hillsides is definitely something I took into consideration. There was definitely a similarity hidden somewhere, though.

Questing is extreme, and once out of my dungeon tutorial, it quickly became difficult to determine whether I was offline on my larry lonesome, or online with the people playing WoW beside me. The quests are standard fetch quests, with very little improvement, bar some escort missions that allowed you to fight alongside NPCs. However, there will be plenty of quests available to you, to a point where the main one gets a bit lost, Skyrim style.

Voice acting is a definite annoyance, and the conversations that go along with it were things I couldn’t let slide. Talking to important NPCs opened conversation windows, allowing you to choose answers (which don’t seem to hold any sort of consequence, unfortunately) and learn more about the quest/game itself; I’m all for these kinds of things. Yet forcing people to listen to low quality voice acting that made it feel like it dialogue was either quickly skimmed over or the cast generally were rather bad, is not something I, or many other gamers, enjoy.

Paired with the fact conversations are rather ironic (one involved an NPC telling me that there was no time, and that I had to hurry, before presenting me with a list of seven different options to continue the conversation, each one at least 40 seconds long) and we have ourselves a problem.

The epitome of any RPG is that the leveling up system works well, and while everything is there in Amalur, they seem to get it around the wrong way, asking you to level up your trade skills before even giving notice to the traditional Strength and Magic. Especially when the mentions of Trade skills aren’t really touched upon anywhere other than in passing. I had to go out of my way to find somewhere to create and craft, yet the game seemed to be trying to tell me this was the most important. 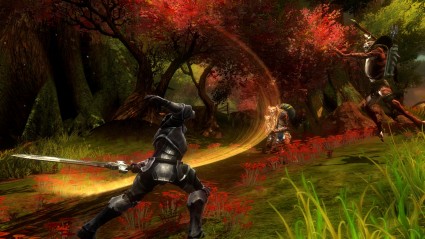 The bottom line is that Amalur is interesting, engaging and we’re going to love it, but for all the wrong reasons. It’s set in old ways, and doesn’t want to push the boundaries. The game defines itself by its own genre, a classic RPG, with only a few things such as slight combat changes really changing things up.

That doesn’t mean it hasn’t tried to look different. Amalur doesn’t stick to the traditional races and the weapon and item names are all irregular. As are reagents for crafting, the menu system is different and equipping items is done almost on an alien screen. It’s all just a cover, though, a facade. Move some things around and change the names and you could easily be playing Lord of the Rings: War in the North.

Sticking with my earlier point, it’s a big year full of big hitters all getting ready to define the genre they’re set in. From huge titles such as Mass Effect 3, to smaller, downloadable titles such as Skullgirls, and everything in between. My worry is that Amalur will fall into a ‘been there, done that’ pile quite quickly when people see that it is not as original as it makes out.

That’s not to say you won’t like it. The game is solid, I just wish it had done more to divide itself from the games already on the market without just moving things around. I’m excited to sink a load of hours into the game, but I do wonder how long it will be before I give up.