I am a Spider-man fanboy. I don’t know quite how to put into words how much the sheer mention of the name sends me into a pretty wild geekgasm. Spidey’s had mixed fortunes in gaming over the years; there are some massive success stories, but in recent times the releases have been somewhat of a ‘copy and paste’ of the open world format that Treyarch brought in with Spider-man 2, and hasn’t really deviated from that since.

This time Shaba Games and Treyarch made a big deal about how they’d re-approached the combat system, aiming for an experience that not only allows you to swing like Spidey, but also fight like him. Did they succeed? Yes, but it’s just a shame that the rest of the game hadn’t seen the same level of treatment.

A tangled web we weave
Web of Shadows has a story that could very well have been lifted from the pages of the comic books and is definitely one of the game’s strongest points. Assembling a brilliant cast of Marvel characters, and not just from the Spider-man universe, we hear the story of how Parker gets reunited with his symbiote of old during a scuffle with Venom.  From here his world turns into turmoil as Venom instigates a massive symbiotic infestation of New York, while Spidey has to tangle some of his greatest enemies, manage his love life and make decisions that affect those around him. There are issues with pacing, for example the symbiotes are barely featured until about halfway through the game, and by the time you get to what the game is actually meant to revolve around, it has already outstayed its welcome because of other factors. 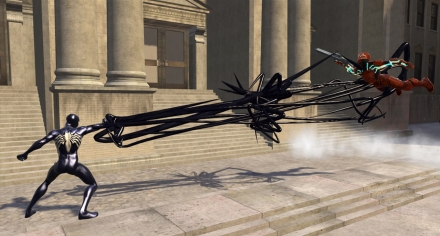 One down, another nine to go...

Learn to count to ten!
I’m going to get the positive stuff out of the way first, because there really isn’t a lot to talk about. The swinging mechanic is as enjoyable as ever, probably the best it has ever been. There is an indescribable pleasure in swinging towards your destination and stylishly rounding a building and landing smack bang in the middle of the action. The much lauded combat redesign is actually a lot of fun.

You can now fight on the side of buildings as well as the ground, but best of all is the air based combat. Using web-strikes you can chain together many attacks and the combat has a nice flow to it. However where this can fall down is the useless targeting system. Touting it in-game as your spider-sense, you hold down the left trigger to highlight nearby enemies, once one is selected you can then use the right stick to flick between them. The problem being that if you’re in the heat of combat and there is another crime going on nearby, the game suddenly decides on your behalf that you should be focusing in that direction, giving you a pointless camera angle. There were also the times that I was battling on a roof only to get knocked off, swing back up and find no trace of the guys I was pummelling heavily before. What came next was ten minutes of swinging around trying to get them to reappear. Frustrating, and this happened more than once.

Aside from the basic attacks at your disposal you can spend the points you earn in the game on attack upgrades for both the red and the black suit. This system works quite well, and gives you some killer moves later on. There are also orbs to collect that improve Spidey’s agility after you’ve collected certain amounts, this is noticeable as the swinging becomes a lot more graceful the further you delve.

I never thought for a second that grinding would play a part in an action adventure, but it does here. The mission structure is a grind-fest. The missions consist of being told where to go, and beating up ‘X’ amount of a particular type of enemy. That’s it. There are variation of sorts; ‘escort this convoy x amount of times’ for example, but it surprised me just how much the game looked to numbers to help fill it out to make up for extremely poor pacing and mission design. There are also some quick-time events and for most part they work well and in context, but there was one especially baffling use of them. In a fight with Wolverine he keeps stopping the fight to quiz you on current day Spider-man plot lines from the comics. Seriously, I have no idea what the developers were thinking.

Another dynamic is the choice system, representing how the symbiote affects Peter’s judgement. Choosing differently at various points can affect the way certain missions play out, how he treats his friends, but ultimately dictates which of the four endings you will get. Two of which are ‘good’ endings, two are ‘bad’.

One last thing I want to mention here; Just how many times do Activision want to roll out this New York map? We’ve seen it in three Spidey games and Prototype, and to be honest I’m getting pretty bored of playing through it. Of course Spider-man should be set in New York, but perhaps it’s time to take a fresh approach at the game design. 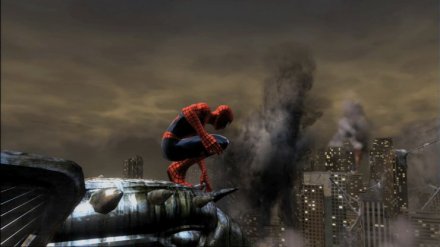 Not as attractive as a New York sky line
Visually Web of Shadow’s is a bit of a mixed bag. The character models of all the prevalent characters are all gorgeously designed, the NPC designs are of a decent quality, but the same can’t be said for New York itself. To be honest I really can’t think of a blander looking representation, even compared to a much maligned Spider-man 3. Unfortunately the game also struggles a lot in the frame-rate department, even slowing to slide-show proportions at times, which is extremely depressing seeing as many other open world games, even bigger than this, can handle a whole lot more going on at once.

‘Thwip!’
The sound effects in Web of Shadows are fairly well implemented; nothing really jumps out at you as being abnormal. The voice acting was surprisingly pretty decent overall, except for one facet; Spider-man. Mike Vaughn, who voices my favourite hero, seems to cross the fine line between adequately suitable to vastly inappropriate. One minute he’s sounding like the hero he should, then the next he’s harking a shrill mid-balls-dropping teenager’s voice. Although let’s face it, it’s nowhere near as bad as Tobey Maguire’s poor performances in the previous games. There are a couple of moments where the shouts of the inconsequential NPCs are capable of bringing a smile to your face, such as hearing enemies shout ‘it’s Spider-man!’, or ‘He’s here!’ as you swing into the thick of it.

Time for another reinvention required me thinks
So, what’s the verdict then? I’m at a crossroads. As a Spidey fan I should love it out of principle, I mean this is a guy who still has Spider-man 3 in his collection, but Web of Shadow’s doesn’t even make onto my shelf as a guilty pleasure. While the combat is heaps better, and the swinging is as good as it’s been, the mission structure takes a massive step backwards, and alongside poor pacing and technical difficulties it becomes a chore more than a pleasure. With a heavy heart, I advise you to avoid.