Double Fine are among my favourite developers in recent years, with games like Psychonauts and Brutal Legend sitting proudly on my shelf despite their flaws. All their games have a quirky sense of humour from Tim Schaffer (he of Lucasarts fame) along with distinctive art styles. However, Double Fine recently went into the downloadable market, first with last year’s Halloween themed Costume Quest and now with their latest game, Stacking. Is it a tower of fun or a stack of… something else?

The odds are Stacking up

In Stacking, you play as Charlie Blackmore, the smallest in a family of Chimney Sweeps in a world of Russian Dolls (bear with me here). Unfortunately, as this takes place in a pseudo-Victorian world, the children and father vanish off to work and are never seen again. Charlie is spared this fate due to his tiny size and so stays at home until a letter from a sibling sends him off on a mission to free his family from their servitude and defeat the evil Baron. As with all Double Fine games, the plot and writing is spot on, although there is no voice acting, the dialogue perfectly suits the theme of the game. The plot actually looks at some pretty bleak themes such as child labour but still makes it as involving as humorous as you’d expect. The written dialogue is also hilarious, especially in the case of characters that are in every area as it charts an ongoing sub-plot with them.

Puzzles abound!
At a very basic level, Stacking is puzzle game that requires you to choose a careful combination of abilities to meet objectives. These are gained by using Charlie’s small size to stack into other, larger dolls in a set order. For example, larger dolls require you to jump into small intermediate dolls to become big enough. Each of these dolls has their own abilities. These vary from useful (such as the infamous farting cook) to the pointless (one of the dolls is a drummer whose frantic drumming does nothing of note). I like this system and it can be quite funny just to mess around and see how each doll can affect the environment around it. 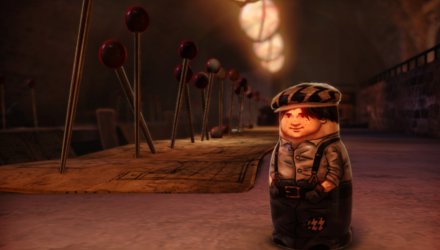 Each area in the game has several puzzles that need to be fulfilled before the level is cleared and Charlie can rescue his misplaced family. They range from drawing a guard away from a door to causing havoc at a safari or stopping the flow of caviar to some decadent adventurer. These puzzles can be solved in multiple ways. Unlike other puzzle games though, all of them can be retried straight after solving them the first time, letting you explore all the various inventive ways the team at Double Fine thought up while making the game. The difficulty level increases at the perfect pace, from only needing a single doll to achieve the objective to needing several dolls stacked together and quickly unstacked in order to dish out their abilities rapidly. There are occasionally puzzles where you work out a way you’d expect to work but isn’t recognised by the game; unfortunately this is an issue with all puzzle games, but it seems less prevalent than in other adventures.

In addition to puzzles there is also a list of hijinks to take part in. These are little side missions to do which are normally to do a doll’s abilities a set number of times. They act as a good introduction into what each doll does and can be handy in solving the puzzles which require a few more of the obscure abilities. They also add something else to do once the thrill of solving the puzzles is complete.

I have one or two issues with Stacking, the main one being the replayabilty. There are a total of four areas and I blasted through the game and got 100% in only a few hours. Once you done everything there is no multiplayer or anything to keep you coming back. There is a good chance that Double Fine will drop one or two DLC packs in the game (it does feel like it would be a very easy fit), however, until they appear, Stacking is a very short game.

The beauty of Stacking
Although the game isn’t the best looking game on XBLA, it does have a fantastic art direction. Everyone in the game is a Russian doll while the background behind them is made of up of everyday objects, carefully layered to create the environments. There are quite a few clever camera tricks used to make the world seem like a bigger place, which gives the game a very distinctive look. There is also a pretty clever little graphical changes here and there with certain dolls, such as the world going black and white when you stack into a dog. Another little touch that makes Double Fine one of the best developers. 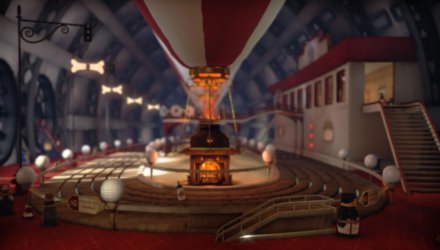 The world of Stacking is beautiful... apart from the Child Slavery thing.

Some puzzling notes
Although lacking in voice acting (in order to stay with the game’s silent film theme), the background music is perfect with tinkling piano overlapping the puzzling action. I also like the incidental sound effects such as the little shrieks the dolls cry out when you stack into someone nearby or those accompanying the various abilities the dolls use. That said, I actually played through quite a bit of the game without sound due to circumstances and it no way hurt my enjoyment, perhaps suiting its role as a silent film.

The solution of the review
I loved the time I spent Stacking, trying to work out the puzzles and enjoying the tale those fine fellows at Double Fine have woven. It has a fantastic story with some great puzzles that had me laughing throughout. My only major issue is the length, but for its price I recommend it to everyone. Buy Stacking and enjoy your adventure in the world of Charlie Blackmore.