Oh Nintendo. Super Mario Galaxy 2 was supposed to be the greatest platformer since Mario 64… It should’ve at least purged my mind of Sunshine (which turned out to be Satan disguised as a videogame. Look it up, people). After his ‘meh’ performance in the first Galaxy, I postulated that Mario might be symptomatic of a devastating illness; but this game has proven it: Mario has contracted, during the Winter Olympic Games, Sonic’s TGDAOPKMKMN disease (also known as The Glory Days Are Over Please Kill Me Kill Me Now). Fifteenth in the main series and the first direct sequel to a Mario game since Super Mario 3, Galaxy 2 is a milestone for both Nintendo and the game’s producer, Shigeru Miyamoto. However this moment in Mario’s enduring lifespan may be remembered as yet another low point marred by awkward controls, cheap enemies and unchallenging gameplay.

No. I’m not doing it. I’m not going to write that Bowser has kidnapped Peach again in an attempt to somehow force her into baking him a huge cake, and now Mario, surprised that Bowser broke through the tight security of the Mushroom kingdom (or that Peach didn’t see the planet-sized dragon turtle coming for her and run), must go on a quest to save her. Ugh…

Okay, no one’s ever cared about the story in Mario, but seriously? Right after I started up Galaxy 2 I turned on New Super Mario Bros. Wii and watched the intro cutscene. It distilled in maybe a thirty-second clip what Galaxy 2 took about ten minutes to tell me. Just hurry up so I can curb stomp some goombas already. Throughout the entirety of Galaxy 2 you might somehow realize there is a plot buried beneath all of the flips and spins; but it isn’t the focus, and it isn’t very good, at all. Unless you’re two years old, but then you couldn’t read the unvoiced dialogue anyway, now could you, you stupid baby?

Wahoo?
Super Mario Galaxy 2 is, put succinctly, a more varied version of its predecessor. If you haven’t played the first yet, don’t worry. Both are so highly influenced by Super Mario Sunshine that if you played that, you have a really good idea of how the Galaxy games are, though they aren’t nearly as insufferable. One cool twist is that Galaxy 2 actually takes some cues from New Super Mario Bros, last year’s 2.5D side-scroller. These 2.5D sections are sadly sparsely placed within the game, and it’s only sad because they’re the absolute best parts.

Unlike other Mario games, Galaxy 2 eschews the hub world and uses the old-school map from games like Mario World, which serves to expedite the short lulls between choosing a star to go after. Once you choose a world, you might spend ten minutes in it at most, as every star is achieved either by reaching it at the end of the level or satisfying a requirement like killing a boss or collecting silver stars. Once in a while they’ll throw in a weird level where you have to glide from beginning to end, slide down a long tunnel or use some other odd, perspective-warping, possibly motion-based form of transit. 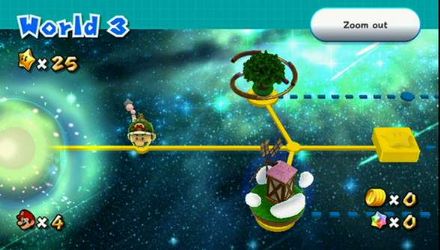 We lost the open world for this?

Each world will have from one to four stars, though four is usually the max. It seems the focus in this game was to pack as much of the Mario experience in as possible, as each level is so wildly different from the next and ends so quickly that you’ll never really take anything in. This might satisfy a hyperactive child, but for us rare folk with an attention span longer than two blinks it’s a jarringly speedy pacing. Whereas other Mario games had iconic levels, usually the first you enter, Galaxy 2 doesn’t have a single memorable level, moment or star. The levels are so simple, easy and short that even when one of the few actually really good ones comes up, it’s over in nothing flat.

Mario’s changed a bit, too. Gone is the short, chubby, speedy hero we once knew. Now he’s a little slower and much lankier. He still can’t change directions in the air at all, and he still can’t punch, kick or dive at enemies anymore. Which is helpful, right? Wrong!

Because Mario’s only methods of attack are jumping and spinning, you’re always forced to get in close to defeat enemies. You know; the kinds of enemies that hurt you on contact and can throw projectiles. You waggle your stick to make Mario spin, which can kill some enemies but in most cases stuns them. Then, with the awkward jumping controls that become very rigid when in mid air, you’ll have to figure out how to land on the stunned enemy and not next to another one that’ll hit you and probably kill you. This is all, of course, before considering the usually unchangeable camera angle that shoots from some awkward locations.

Okay, I’ll try to explain the mess that is surviving in Mario’s harsh world. In Galaxy 2, Mario has three units of health, which means it takes three hits to kill him the hard way. Unfortunately for us, Nintendo just discovered ragdoll, as each time Mario’s hit he goes flying, then hits the ground and continues to slide back (and you can’t stop or jump out of this ever). That’s a problem because you’ll go from about to land on an enemy’s head to getting hit by his projectile attack to sliding fifty feet away, off of a ledge you had no danger of falling from before, and into a black hole. It gets worse as levels get trickier, ever thinning the line between perfectly fine and dead.

Near the end of one particularly annoying level where I had to control Mario while he was stuck in a spring, all I had to do to reach the star was bounce down a narrow bridge over some oncoming boulders. Jumping in the spring took precise timing, so I died, a lot. So when I was finally near the end, after hopping over three or four huge boulders, a tiny one came out just before I could reach the star. This is the point where I didn’t hit A at the perfect moment and Mario simply kept going. He got smacked by the boulder, which sent him into ragdoll and knocked him off into hell. “TOO BAD”, said the message on the game screen. Depressed, I threw the controller and cried out “ Why? Why did you punish me so harshly for one mistake!?”

The Nintendo Gods replied: “Because we hate you. We hate you for buying this game. We hate Mario and we hate making the same game over and over. Now suffer this twenty-hour crucifixion, you idiot! Never buy a Mario game again!”

Now I don’t want to give the impression that this is a hard game. It’s a cheap game, sure, but definitely not hard. In fact, every level is defeating in its easiness, and you’ll find the biggest trouble with getting past simple enemies, which pose a greater threat than the gratuitous, monotonous, repetitive boss fights. Seriously, every boss is pretty much a palette swap. Even Bowser goes through the exact same battle over and over up until the end where he actually surprised me and did something new (though it too wasn’t challenging at all, just shockingly novel). Every boss battle ends with pretty much the same cut-scene, too. It makes me question the point of living… er, I mean playing… if it’s always going to be the same. Always. 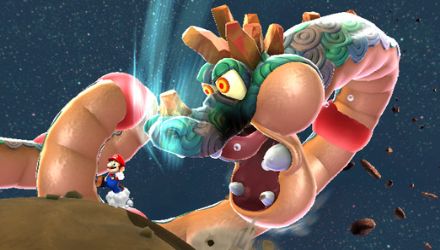 I know before I said the game was very varied and noted that as a problem. The thing is Galaxy 2 seems to be at odds with itself. Though each level looks and feels different from the last, the goals are never any different. It’s like listening to the same song over and over with different instruments.

What best exemplifies Galaxy 2 as a whole is the ability to play as Luigi, which sounds cool until you realize it’s just another palette swap. So it’s about as cool as if you’d been told you could play through parts of Arkham Asylum as Robin. First you’d be like, “Yay, Robin!”, but then you’d do it and be like, “No, Nintendo! I don’t want to play as the sidekick with no benefit other than seeing his green ass die instead of Mario!” Just changing the phenotype doesn’t hide the genotype.

The beautiful cosmos
Galaxy 2 looks beautiful. Halfway through the game I thought I wasn’t doing it justice by playing on an SD monitor; then I remembered that the Wii didn’t support HD and it just really was a great-looking game. It’s not all dark and gritty, so if you’re looking for something to please your eyes instead of disgust you it’s a great choice. It also isn’t so bright it’ll turn your stomach, either (this from someone who couldn’t finish Banjo Kazooie because the colors hurt his eyes). Galaxy 2 is actually more fun to watch than to play.

Bloop bloop bloop
The soundtrack in this game is unbelievable as well. Packed with symphonic remakes of classic Mario tunes (most from Mario 64, unsurprisingly) and a few songs all its own, Galaxy 2 makes every event within it feel like a grand occasion. Grabbing a star on a particularly bad, frustrating level is much more satisfying when that orchestral tune plays as Mario and Yoshi float around. 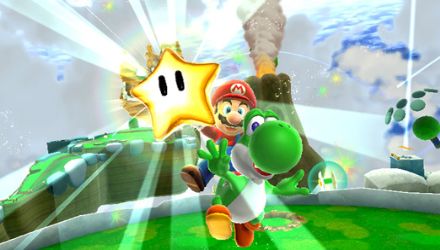 You can ride Yoshi in quite a few levels in Galaxy 2. No, it doesn't make things any better.

It’sa me! The forced in co-op!
In multiplayer, a second player can jump in locally and shoot enemies with starbits, which stun them, or keep their cursor over them to pin them down while player one vanquishes them. It usually takes much longer that way, but it does make things a lot easier. If you’ve got a friend with nothing better to do, get them over quick.

Thanka you very much for playing my game!
Honestly, Super Mario Galaxy 2 seems like yet another of Nintendo’s attempts to recreate the magic of Mario 64, but they still haven’t gotten it right. Galaxy 2 is proof that they need to just stop. They’re killing Mario by forcing him to do the same thing over and over with little alterations that ultimately make no difference. In the process they’re disappointing long-time fans and turning off newcomers. No casual gamer wants to play something so cheap and punishing that it actually has insta-deaths like classic 2D games, and no hardcore gamer wants to play something so unfocused and easy that it never poses a real challenge.

This may be the most awkwardly configured Mario game since Sunshine, though it still gets nowhere near as bad as that apocalyptic nexus of everything dark in this world. If you’re into varied, easy games and can ignore the cheap, punishing deaths, you should at least give Super Mario Galaxy 2 a try. If you’re into smiles, love and happiness, avoid this game and others like it.