Super Street Fighter IV: 3D Edition is Capcom’s attempt to bring this comeback to Nintendo’s new handheld (not to mention, an attempt to over-inflate game titles far above a modest length). Will this fighter come out kicking on the 3DS, or could the reduction in screen size, graphical prowess and control layout cramp its style?

Back to the streets

Street Fighter games have never strayed too far from their arcade roots, placing less of an emphasis on story and more on the action. Not a lot has changed here, with short cut-scenes providing a semblance of a narrative, but without stealing any of the spotlight away from the fights. For each character, the story generally outlines their entry into the tournament that the Arcade mode is comprised from, although it doesn’t go into a lot of detail.

Furthermore, if you haven’t played previous entries in the Street Fighter series you might be left baffled by some of the references made. The game doesn’t make much attempt to fill you in on each character’s back-story, which isn’t a problem for long-time fans but newcomers could feel left out of the loop.

A fighting chance?
The fighting mechanics of Street Fighter IV 3D are fantastic. There really haven’t been many alterations to the core game in over two decades of its existence, but it still manages to feel fresh. Like the best video-games, it encapsulates the cliché of being easy to pick up but difficult to master. The fighting system is very deep and complex, made evident by its hardcore following. Anyone can enjoy themselves, however, with its fast-paced, fluid and tense gameplay. 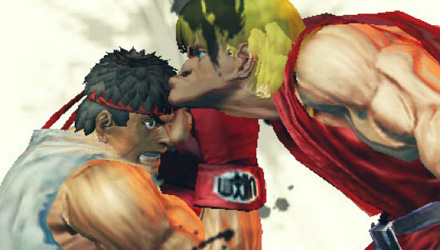 As always, the Arcade mode is where it’s at for your main single player thrills. Pick your favourite from a generous selection of 35 characters, and battle your way to the top to face the creepy Seth, who wants nothing more than to suck you right into him. Whatever floats your boat, I guess. Even the bonus stages of beating up cars and barrels are present from Street Fighter II, although these are a bit old hat now; thankfully there is an option to leave them out.

The length of the Arcade mode increases with the difficulty mode selected, but it’s still over quickly. It’s better to be open-minded and try lots of different characters, so that you can beat the mode over and over from a variety of perspectives. Whereas some characters have similarities to each other, overall there is a huge assortment of different fighting styles, so you’re guaranteed to find several that’ll suit you.

As a supplement to the Arcade mode, Training mode lets you fight against dummies for honing your skills (or for if you’re just really incompetent and don’t stand a chance against enemies that fight back) and Challenge lets you access the car and barrel smashing mini-games as well as Trial; a collection of stages involving pulling off a succession of increasingly difficult combos. The latter is a good way to learn how moves can be linked together, but is also likely to make you hit your head/console against the wall in frustration a fair few times.

There are some welcome bonus features included in the game, such as Figure Collection, which feels nicely reminiscent of a similar concept in Super Smash Bros. Hundreds of character figurines are collected through a slot machine, paid for by playing the game or with 3DS Play Coins. These trophies can be assembled into a team to fight any other Street Fighter owners you meet through Streetpass. This is a quirky and ultimately pointless function, but amusing all the same. 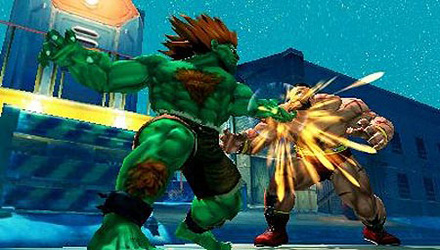 You won't like me when I'm angry... oh wait, wrong franchise? Sorry, Blanka

Unfortunately the breadth of single player offerings depends on what you make of it. If you’re happy to play through the Arcade mode many times like I suggested then you’ll be quite satisfied, however those expecting a fully fleshed-out campaign mode will be disappointed. Thankfully, an excellent multiplayer mode makes up for this, which I’ll get into a little bit later.

The controls are also a mixed bag in my opinion. First of all, a stroke of genius is the inclusion of shortcuts on the touch screens for several of your special moves. I must give the developers a pat on the back, for really helping to make the game accessible to newcomers in this respect. Of course, I can imagine some of the hardcore crowd will be miffed about this concession, to the effect of: “OMGZ, YOUR MAKING THIS GAEM TWO EASY FOR THE N00BS!!!1”

I found problems with the Circle Pad and D-Pad of the 3DS, however, although this was more of a hardware issue than anything. The Circle Pad is a great addition to the console, and it’s very handy for performing quarter-turns to pull off moves, yet quickly flicking it twice in one direction to perform a dash, for example, is almost impossible.

I settled with the D-Pad for this very reason, however mine creaks and occasionally even gets stuck. I’m going to test another console to see if the same problems arise, but regardless, the D-Pad on the 3DS responds better to tapping each direction than ‘rolling’ your thumb in a circular motion. Either control method requires a trade-off, with neither perfect for the job.

Packs a pretty punch
Street Fighter IV 3D masterfully shrinks the striking visuals from the home console versions down onto the 3DS’ screens. A cartoony cel-shaded style is employed, overflowing with gorgeous colour and detail. Animations are fluent, and watching your character perform their gratuitously over-the-top special moves is a joy to behold. 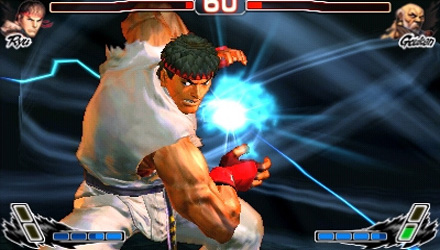 An all important question is, of course, how the 3D effect adds to the graphics. Compared to other titles from the launch line-up, Street Fighter IV 3D takes a more understated approach, with not such an enormous sense of depth as other games. That said, there is the addition of a whole new 3D over-the-shoulder perspective option, where the 3D does successfully help you to perceive the distance between you and your opponent. It’s nice to have the choice, as purists are welcome to stick to the regular perspective with the 3D slider turned off.

There are in fact several other reasons to consider leaving 3D turned off. In 3D, the backgrounds are static, there is noticeably more aliasing (jagged edges) and the game runs at 30FPS instead of an über-smooth 60FPS. This isn’t a deal breaker for me, but something to bear in mind. In my opinion, the graphical benefit of having 3D activated outweighs the drawbacks.

Perhaps the only other negative point I have to mention about the visuals of Street Fighter IV 3D is in the menus and movie sequences; the former looks plain at times, and the latter aren’t rendered in 3D, which is a shame.

Sonic BOOM!
To accompany the visual beauty of the game, Capcom have also done a stellar job with the audio. The soundtrack is absolutely brilliant, with a range of energetic background themes that get your blood pumping. Some of the tracks are even quite addictive, such as the theme to the East Asia Overpass level, which I often find myself humming along to. 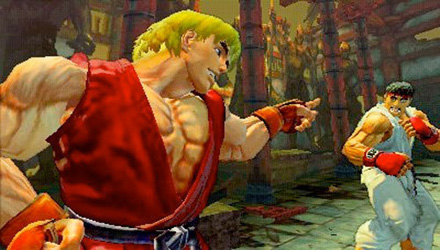 Hey, Ryu! I'm gonna pound you harder than I did yo momma last night.

The fighting sound effects are punchy (no pun intended), and the characters enthusiastically shout one-liners, like Seth’s “Behold the glory that is the Tanden Engine!” These are cheesier than a quattro formaggi pizza, but this all adds to the tongue-in-cheek retro arcade styling.

A challenger appears!
Street Fighter IV 3D has the honour of being the only 3DS launch title with a compelling online multiplayer mode. In fact, it’s shockingly the only title with an online mode full stop (to my knowledge). Hats off to Capcom then, for showing everyone else up.

As well as being able to play against friends or find matches by certain criteria, a matchmaking feature pits you against players of a similar experience and skill level. Wins and losses contribute to a score that places you in different rankings, from D to A (or maybe even higher, I’m too crap to have got that far yet).

This makes it even more addictive than a simple versus mode, as you’ll be determined to rise up the ranks, however much of a fruitless quest that may be. Street Fighter pros will probably scoff at this statement, but this certainly isn’t an easy game. I have had my ass handed to me on many an occasion, especially to start with. Seeing that the matchmaking system has borked up and placed me with an experienced Japanese player always elicits a groan of dismay. That said, even though I’m rubbish and a sore loser, this is one game where losing isn’t too frustrating. It just makes you want to try again and better yourself. 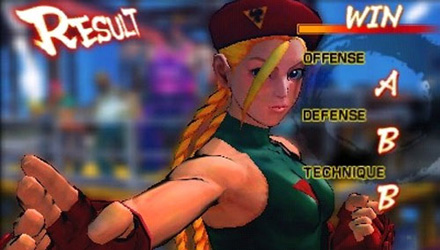 The game grades your performance after each fight. If you're like me, yours probably won't look this positive very often...

The netcode is decent, lagging slightly in matches against people from distant countries, but still rarely unplayable. All in all, the mode is very well made and heaps of fun. After playing through Arcade mode a few times, this is probably where you’ll spend a good majority of your time with the game, and quite rightly so.

Ha-do-ken or Ha-don’t-ken?
Street Fighter IV 3D is undeniably the most complete package of the 3DS lineup. Very little has been removed or compromised from the home console release, resulting in a quality, feature-rich title, and probably one of the best handheld fighting games ever made. Unless you’re a staunch pacifist and would prefer stroking puppies, you owe it to yourself to get this for your 3DS.