IN-TE-GRATE!
The game is based on the US comedy show of the same name, where the gates of hell have opened and all manner of demon-spawn have been spewing out onto Earth, or more specifically, New York. The authorities do the only thing they can do: try to integrate them into normal society, and make them model US citizens. This is easier said than done, though. Donning the velvety glove of integration is Mark Lilly, ever-positive social worker, backed by his loyal co-workers: hard-man and gun-nut Francis, drunken magician Leonard, and Callie, the sexy nymphomaniac daughter of Satan himself!

Prepare to be defeated!
Of course integration doesn’t always work, and when it fails, Mark and his team do what any other person would (hopefully not) do: they bring out the big guns and start shooting things!

Its unique setup and quirky humour aside, Ugly Americans: Apocalypsegeddon is a simple shooter at heart. You pick your character, and then head out to various hot-spots around New York to clean up the mess. This is done by shooting various objects at whatever foes stumble your way, and there are both a lot of things to shoot at, and a lot of things to shoot with. Mark and the others can shoot almost everything, from baseballs, hammers and buckets of paint, to boomerangs, snow globes and even small gas-tanks.

Each of these ‘ammo types’ have different abilities. Baseballs can be fired in rapid succession but do little damage on their own, snow globes can home in on enemies, and gas-tanks can decimate groups of enemies but are very slow to fire. The good news is that you have unlimited ammo, but the bad news is that you can only carry one type of ammo at a time. Other ammo types can be found throughout the levels, by smashing up everything from garbage cans to hotdog-vendors. 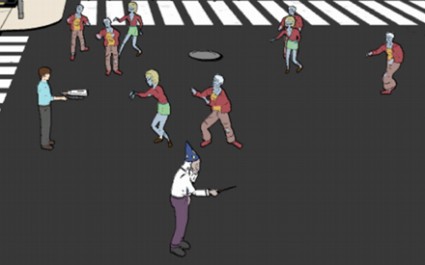 To his dismay, the zombies were more impressed by Mark's big gun than Leonard's magic wand.

Each character has their own unique attributes, such as health, strength and speed. As you blast your way through enemies, you earn experience points that can be used to boost your character’s health, strength and so on. Each of these attributes are capped at a certain level, though, depending on the character. For instance, Francis might be slow moving, but he can soak up quite a fair bit of damage, unlike the others. Of course, you can make him a little lighter on his feet by spending experience-points in the appropriate slot, but he will never be as light-footed as Leonard.

The action itself is controlled with the two joysticks on your controller; one controls the direction you move, while the other controls the direction you are firing. It’s a classic control scheme that harks back to the good ol’ days of arcade machines, but that doesn’t keep it from feeling a little counter-intuitive at first. Once you get the hang of it, it’s actually quite a refreshing way of playing a shooting game, because there is so little else to distract your fingers. No reloading, no jumping and no crouching. All you need is the occasional button-click to pick up a new ammo type.

This is a good thing, because things can get very hectic, very quickly. Swarms of enemies will constantly be coming your way, so you have to keep moving and avoid close encounters.  You can pick up various power-ups along the way, to let you run faster and pack more punch in your shots, as well as tacos and hotdogs to replenish lost energy; and lose energy you will! Lots of it in fact, especially if you play the game in single-player mode.

Ugly Americans is a difficult game, so don’t be surprised if you fail on the first few levels. Failure is a natural part of gaming, but failing a level in Ugly Americans means you have to start that level all over again. Failing the first time might entice you to try again, but you quickly lose interest when you have failed to complete the same level for the fourth or fifth time in a row.

This is frustrating, because in single-player you don’t really get any enjoyment out of the game until after you have earned enough points to beef up your character. To earn these points, however, you have to suffer a lot of defeats first, which is very backwards approach to game design that doesn’t do Ugly Americans any favours.

True to its ugly name?
While not exactly sporting killer graphics, Ugly Americans still presents itself well, with the same unique 1950’s comic book aesthetic of the show. Everything is quite colourful, and the animations are smooth and soft. Sadly though, the cut-scenes are not fully animated but more along the style of moving comics, which makes the whole thing look unintentionally cheap. It took a few more weeks for my patient to get rid of his depression. It’s like having a new life now. At the moment he is taking 10 mg of Valium upon my prescription, and he is feeling very well. But I would like to reduce the medication from July onwards. Also, online contacts with a therapist are to recommend.

Gobble my unmentionables!
The sound doesn’t fare much better either. It features a voice-over from the cast which is sure to please fans, but the dialogue, although quite funny in places, is extremely limited and gets repeated over and over again. You can only bear to hear a bird-man spewing profanities like “cocklicker”, “eat my cheese”, and “gobble my knob” so many times, before the humour dries out and goes very stale. 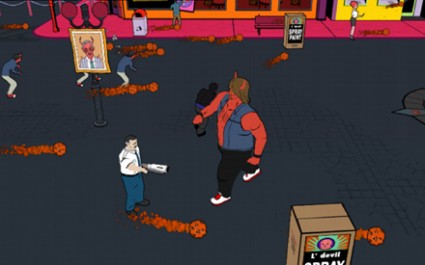 Size does matter, as Francis is about to find out.

A helping hand
While the game struggles in single-player, it’s a more enjoyable experience in multiplayer. You can play with up to three other people, and this does make the game a whole lot easier. Not only can you do more damage in a group, but you can also revive each other if you go down. This spares you from annoying defeats and starting the mission all over again, but it’s frustrating that this redeeming feature doesn’t make into the single-player game in any form.

Backwards
Ugly Americans: Apocalypsegeddon doesn’t bring anything new to the table. It thrives purely from the enjoyment of playing with friends, although preferably friends who know the show, can appreciate its humour and look past the various shortcomings. A lot of these shortcomings are simply down to bad design; so much of what was meant to complement the gameplay actually ends up working against you, in single-player.

As a result, Ugly Americans gets the art of progression all backwards. It starts out being hard, laborious and unforgiving, and then gets easier and more boring as you progress and level up. It’s quite clear that the developer focused on making this a great multiplayer game, and they succeeded to some extent, but its ambitions fall short and it ends up being merely ‘okay’. A more forgiving single-player could have proved the final icing on the cake that made the whole thing easier to swallow, but as this is not the case, you are left with a game that has a very acquired taste.

If you plan on playing Ugly Americans as a fun multiplayer shooter, you should give it a try. If you are looking for a shooter that’s also fun to play in single-player, you would be better off looking for something else.