Naughty Dog have a pretty good pedigree behind them (if you’ll excuse the pun). The creators of Crash Bandicoot and Jak & Daxter have gone from strength to strength over the years with the guidance of Sony. However, I’ve rarely had a real interest in any of their games. That changed over the course of a few minutes when I chanced upon a preview video of Uncharted: Drake’s Fortune. I was instantly fascinated thanks to its unique blend of ‘stop and pop’ gunplay mixed with Tomb Raider style adventuring. Sure we’ve seen game mechanics similar to this in other games, but the way it was put together captivated me. I’ve had a bit of a wait to get my hands on the game, having only just acquired Sony’s slimmer box of tricks, but it’s an adventure that was totally worth the wait.

Robbing the grave of Sir Francis Drake
Uncharted follows the story of one Nathan Drake, a cocky but likeable treasure hunter searching for the alleged watery resting place of his famous ancestor, Sir Francis Drake. After salvaging the iron coffin from the seabed with the help of video journalist Elena, it transpires that the coffin holds nothing but the old seafarer’s diary, with hints that could lead to the treasure of El Dorado. Their boat is suddenly attacked by mercenaries hired by Gabriel Roman, a rival treasure hunter. The boat is destroyed in the ensuing combat; however Nate and Elena are rescued in a timely fashion by Nate’s old friend Sully in his plane. Nate lets Sully talk him into ditching Elena, believing that her documentary will cause them nothing but trouble. The pair set off to South America to find the treasure ahead of Roman and his cronies.

The storyline over the course of the game is nothing short of outstanding. Derivative, like so many other aspects of the game, but outstanding nonetheless. Part of what makes the story so interesting are the characters themselves. I usually find playing as an overconfident protagonist a massive turn off, however Nathan Drake’s character has many levels, and although I started off believing him to be someone I would inevitably grow to really dislike, the exact opposite happened. Elena and Sully play their part in that too, and there are moments in the game that make them seem as if they could be real people, which is a true testament to the quality of Naughty Dog’s character work here. The high production values don’t just stop with the characters, as the plot and pacing are excellent throughout.

What would happen if Lara Croft had Marcus Fenix’s baby?
Read most reviews available for Uncharted, and you’ll find the above comparison made often. I did promise myself I wouldn’t follow suit, wanting to follow the anarchistic voice in my head, but it’s almost impossible not to. The first aspect of the game you are introduced to is the combat system, and it’s all about the stop ‘n pop style that Gears of War played a part in popularising. You’ll have played this many times; Circle snaps you to cover, L1 leans you out to aim, and R1 fires. As with any game with this system the enemy A.I. can play a large part into whether it works or not, and in this instance it’s very agreeable. Enemies keep you under pressure while others flank your position. Hold your ground well and you’ll soon be flushed out with grenades. Even without the grenade factor it’s not just a simple case of hiding behind one piece of cover and picking off an army as it can be in some games. You’ll have to make good use of your surroundings and keep on the move as enemies can come from all angles. 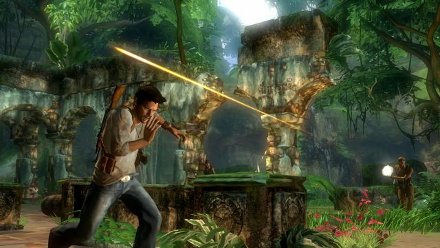 There's something in my hair! Get it! Get it!

There is an element of weapons strategy involved as you are only allowed to carry two firearms at a time; one rifle/SMG and one handgun with limited ammo available. Often in the midst of a fire-fight you’ll find yourself scrambling around looking for ammo or a replacement weapon, and it adds to a frenetic experience. One thing I really did not like was Naughty Dog’s usage of the Sixaxis. Using it to help balance Drake across a precariously placed log is a fair but unimaginative usage, but using the Sixaxis to change the trajectory of grenades is messy and counter-intuitive, to the point where I kept their usage to a minimum.

The combat is not the be all and end all however as in the other segments you’ll be hard pressed not to see the heavy Tomb Raider influence, and this is where you find the game takes most of it’s inspiration. What Uncharted does is make that similar experience far more fluid and enjoyable to play-though. Even in Lara’s recent better efforts, the actual platforming elements felt a bit rigid to say the least; where as in Uncharted the fluidity is clear from the very offset. The puzzles are also very reminiscent of Tomb Raider, but at times require a little more thought and Francis Drake’s notebook to help you through, although I would have liked to have used a little bit more of the grey matter in some areas. In every area conceivable though, Nathan outclasses Lara on every level, even without boobs.

Lastly I need to mention there is a hand-to-hand combat system which I found seldom used. Based on timing, you require three hits to take down an enemy, but these could arguably even be considered quick-time events roughly disguised as combos. There are other traditional quick-time events, luckily they are in context for most part and aren’t overbearing on the overall experience. 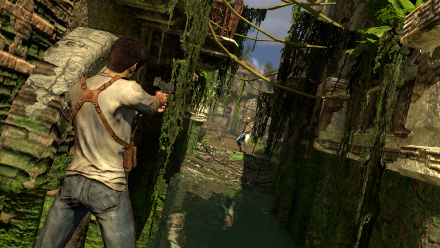 Drake, you handsome bastard…
The visuals in Uncharted are a pretty decent advert for what the PS3 is capable of. While not wholly realistic looking, the game has real bright and vibrant character about it. The actual characters are rendered perfectly with what would appear minor touches, such as slightly exaggerated facial expressions, making a huge difference to enhancing the characters personalities. There are other awesome touches, such as water effects and how they interact with Drake. Jump into the ‘drink’ and Drakes clothes become soaked, but only right up to where the waterline was. Best of all, while looking absolutely stunning throughout, there is not one single let up in the frame rate, nor are there any other such technical issues that will put a dampener on your experience.

Sounds of the jungle
Drake’s Fortune has one truly epic original score that could have been ripped right out of any modern day adventure movie. The highlight is easily the track named after our hero, ‘Nate’s Theme’, a powerful rising anthem that acts as stark contrast to some of the other mellower themes. Regular videogame voice actor Nolan North does a brilliant job as Nathan, but is supported well by an equally capable cast including Emily Rose and Richard McGonagle. In fact, nobody in the game really sticks out in a poor light. Also impressive is the chatter from the enemies during combat. I rarely heard the same shouts more than once in a short periods of time, and in one notable instance I’m sure one of my attackers called me a ‘honky’, which I didn’t hear that again once throughout.

Naughty Dog?! GOOD DOG!
It’s impossible to ignore the glaring inspirations behind Naughty Dog’s effort here. The irrepressible ‘They’ are often heard to be claiming that imitation is the sincerest form of flattery, but in gaming terms it is often frowned upon, and with good reason. However sometimes when a developer not only imitates this well but also in many ways surpasses the main game it aims to live up to, you have to sit back and admire their work. Despite some very minor faults Uncharted: Drake’s Fortune screams sheer class from start to finish and in many ways is the perfect Tomb Raider game, only with Lara, Crystal Dynamics and Eidos nowhere to be seen. A game that’s as good as it is derivative; and that is one hell of a compliment.