You know those games that get critically panned by the mainstream media, the ones that despite all the bad press you still find yourself with a nagging itch that you’d like to give it a go anyway? The ones that when you eventually do experience them for yourself, you wonder where all the venom aimed at it came from?

For me, Velvet Assassin is very much one of those games, but the criticism isn’t all totally unjustified. Developer Replay Studios take us back to World War 2 (yes, again), but rather than being your WW2 generic shooter, Velvet Assassin is all about the stealth.

Roots in reality
The plot of Velvet Assassin follows the British agent Violette Summer (based loosely on real life secret agent Violette Szabo ), who is laid up on what could eventually be her deathbed as she recounts the missions leading up to her injuries. The twelve levels cover five of her missions, told in flashbacks in which she took out German targets, stole vital intelligence, and sabotaged key operations over various locations in Europe. The plot is extremely dark, and was probably part of what I enjoyed the most, however I don’t feel that the developers really hit their full potential. Part of this is down to the fact that the five main missions have no real connection to one another, serving as their own self-contained stories. They do, however, give you an insight into Violette’s psyche, and that is a scary place to be, although she is the most intriguing part about the entire set-up.

You see, Violette is a classically beautiful but emotionally detached and damaged human being. A callous killer who doesn’t hesitate to take a life if it will help her complete her objective, even if it’s that of a fellow agent. Her lack of compassion towards her fellow man makes Agent 47 look like a pussycat.

The missions themselves cover all kinds of sensitive areas of World War 2, with the Holocaust probably being the worst. It’s only hinted at, but for such a prickly subject it’s hard to say whether they tackled it tastefully or not. It definitely did hammer home the brutality as you come across the bodies of dead Jewish men, women and children as you track down your victims in the Ghetto. 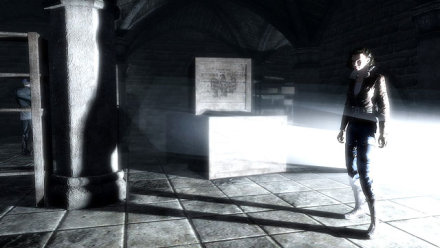 Me and my shadow!

Competent covert action
Velvet Assassin, as far as stealth games go, is a pretty basic affair; when you are in the shadows, behind cover, or in the bushes you can’t be seen, that’s about as complicated as it gets. Enemies walk on predetermined paths from which they won’t deviate unless disturbed, requiring you to be good at spotting patterns. Recognising when to make your move is vital. Stealth kills can only be performed from behind and some of these are brutally satisfying, my personal favourite was ripping the gasmask off an unsuspecting Nazi’s head in a toxic area. Unfortunately to perform these you have to be perfectly lined up from behind your victim, come at a slight angle and you will get found out.

To make good use of your environment you have a couple of tricks up your sleeves, the most commonly used is the ability to break fuse boxes to flood heavily populated areas into darkness, allowing you to stalk easier. You can also tinker with electric panels to give the Nazi’s a shock, or exploit pools of fuel. Another nice way to kill is the ability to sneak up on an enemy and set his grenade live, turning him into a walking time-bomb.

There is also an element of social stealth, which is the most broken part of the gameplay experience. A couple of times you will acquire a Gestapo uniform, allowing you to walk relatively freely throughout the levels. However get too close to an enemy and they can spot your erm… ‘secret agentness’. Sounds a workable system in principle right? In execution it is very weakly implemented. You are warned that suspect behaviour will alert guard’s attention, however you can act as you like providing you don’t get too close to someone. I had moments where I was running around in circles like a headless chicken just to keep my distance, and the guards didn’t even look twice.

Another feature is the use of morphine, which allows you a short amount of time to take out one enemy from any angle. As soon as you take the morphine, Violette is bizarrely stripped down to her nightie and able to run right up to the enemy, explained by the dream state she is in because of her ill-health.

Weapons are fairly scarce commodity, as your main weapon of choice will be your trusty blade, however often you are entrusted with a silenced pistol with very limited ammo. There are more action-orientated set-pieces where your only option is to shoot your way out using whatever weapons certain cabinets give you, but these are the least enjoyable parts  as the shooting mechanic isn’t the greatest. It functions adequately enough for getting yourself out of a tight spot occasionally, however extended shootouts grow frustrating. Luckily these moments are few and far between except in the final level, which for some reason is a pure shootout and does nothing but leave a sour taste on what was an otherwise enjoyable campaign. There was something that baffled me on one of the levels, too, where Violette bemoans the lack of a firearm, but doesn’t think to pick one up from one of the many Nazis she murdered along the way. I mean seriously, just pick one up, there’s one on the floor right there!

There are collectables to locate throughout the campaign, and these earn you upgrade stars. With these you can upgrade three key abilities; Stealth, which makes you quicker; Strength, which allows you to take more hits, and Morphine; which gives you more time in the dream state. All of these have a negligible effect on gameplay, and anyone with half a brain will plump all their stars on the stealth aspect to speed up Violette’s slow walk. 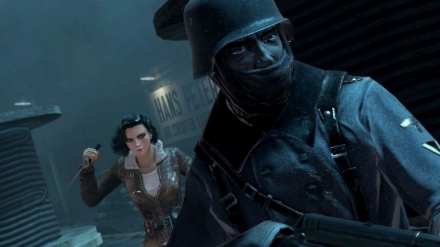 Good looking, but flawed on the inside
Velvet Assassin is actually a pretty decent looking game, however it does suffer from frequent optimisation issues. The frame-rate at times is absolutely shocking and was one of the very first things that struck me; not exactly a great first impression to make. The lighting dynamics are generally impressive (and have a gameplay impact in some areas).

Environments are detailed and play a large part in making the atmosphere what it is. Violette is extremely well modelled, although the same cannot be said for the NPC’s, which is a shame. Speaking of the NPC’s, I think there must have been about four character models for the entire game. You could understand some repetition in a massively open world game, but not in what is a fairly linear experience.

Deathly silence
Even though we’re dealing with a stealth game, equating to a heavy focus is on making as little noise as possible, that doesn’t mean that the game can’t impress audibly. The first thing to mention is that the voice-acting is absolutely top notch. From the icy sultry tones of Violette’s narration, to the general chit-chat from the Nazi forces, it is all very well written and produced. Sound effects are nicely handled and go a long way to making the stealth kills extremely satisfying, and the weapons sound convincing enough when fired. The soundtrack is fairly average; get detected and rising powerful music kicks in, but mostly it’s an uninspired affair.

Getting away with murder
Velvet Assassin is a game that gets a lot of things right, but unfortunately gets some major things wrong as well. While it lacks the variety, feeling of urgency, and sheer class of Sam Fisher’s or Solid Snake’s escapades, as an example of a basic but functional stealth title it succeeds.

With some more work it could have been more than what it is; an average game that’s merely worth a playthrough. There are large doses of enjoyment to be found with it right up until that inexplicably awful end level, so while it’s not as bad as the mainstream media would have you believe, be warned if you give it a go; once completed I can’t see many going back to it.