Life is complicated and confusing. This is why we spend so much time throwing money at gadgets that make things simpler or, in gaming’s case, take us away from our troubles. When it all becomes too much, there’s nothing better than sitting down and enjoying time with something as basic and as enjoyable as a solid first-person shooter.

There is something wrong, however, with repetitive shooters. Shooters that show you all they’ve got within the first thirty minutes and then proceed to drag this out for the ten plus hours. Maybe Shadow Warrior is trying to hark back to the ‘good old days’, but all it really did is remind me of how far we’ve come.That’s not to say that no one is going to enjoy Shadow Warrior. It is, after all, a budget title based on an old I.P. The original Shadow Warrior shares a lot of its DNA with the beloved, though highly out of fashion, Duke Nukem series.

So ask yourself : Do you like ‘old school’ first-person shooters that offer mindless action? Do you hold the original Shadow Warrior games dear to your heart? Do you think ‘Lo Wang’ is, without doubt, the funniest name to have ever existed, ever? 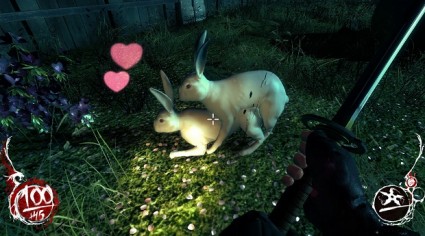 If you answered ‘yes’ to all three of those questions, stop reading this and go buy Shadow Warrior. You’re going to have a blast.

For everyone else, you’re likely to find the humour tiring and it will push your eye-rolling abilities to the limit. The name ‘Lo Wang’ gets overused beyond all measure:

“You can’t handle the Wang!”

“This Wang’s too tough!”

“Wang is another word for ‘penis’! Do you get the joke yet!?”

These annoying one-liners wouldn’t be too bad if they weren’t so frequent. Lo Wang suffers from ‘Cantshutupitus’ – a terrible condition that grinds down a player’s mental state very quickly. On top of this, the visual gags amount to humping rabbits and car manufacturers called ‘Titsubushi’. 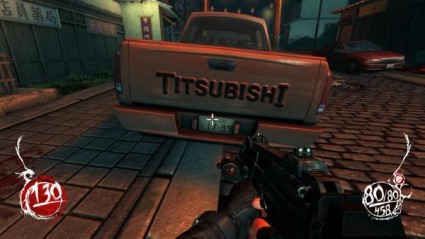 Too funny for words.

The story itself is fairly straightforward. A mad gang boss gets involved with some demons. Said demons are having issues of their own, which means one of them is banished to the real world. You happen to team up with previously mentioned banished demon. This gives you some powers and it also means you get embroiled in some family bust-up that’s occurring in the other realm.

All of this is just an excuse for lots of sword fodder to appear. The main meat of Shadow Warrior is its combat. There are secrets to find within the linear levels, though it’s not exactly entertaining to go ahead and hunt all of these out.

With combat, you’ve got a few guns to unlock and upgrade and, on top of this, you’ll learn new skills and sword-wielding techniques. Shooting is fun enough, with enemies reacting to each bullet fired. Whilst they’re clutching at their legs or arms, this will give you a chance to focus on the twenty other enemies heading your way, or maybe you’ll choose to rush in and finish them off with your sword. 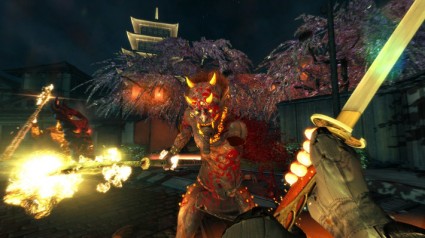 It’s often better to stick to your guns rather than mess around with your skills.

This is fairly fun, though gets quite repetitive. New abilities, as previously mentioned, do get unlocked, though they’re a little tricky to perform and often don’t improve your ability to clear an area as much as perhaps they should.

To perform some of these tricks, such as powerful sword thrusts and magical ground-pounds, you need to tap twice in one direction and then press one of the shoulder buttons. The requirement of tapping in a direction often causes you to double-tap into trouble, which is an issue as this game often has hordes of enemies flying at you. Having to move towards your enemies in order to execute a move becomes more of a hindrance than it should be.

On top of this, the way you unlock new abilities highlights another issue I had. To gain these powers, you need to find crystals to power-up your special moves, and you need to gain ‘karma’ to improve your other abilities. Finding crystals is fine, even if some of them are hiding a little too well, while gaining karma comes from killing enemies. Killing enemies in a ‘varied’ way gives you a boost to these karma points.

What Shadow Warrior considers varied and what I call varied are at odds with each other, however. This mechanic initially encouraged me to play around with my abilities and weapons, but I soon grew tired of this as clearing a room using all of the powers at my disposal got me a 3 out of 5 rating, whilst other times solely relying on my uzi got me a perfect 5. This made no sense and the karma points soon became redundant. 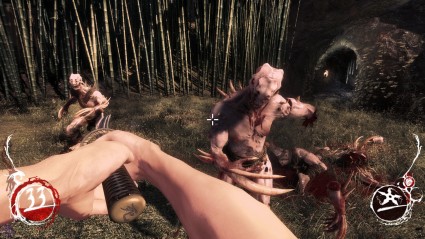 Which is a shame, because this game needs variety. The levels and the enemies don’t provide it, so encouraging the player to provide their own variety makes sense. The length only made the need for more varied content more apparent; running at over 10 hours (for me, at least) it wore out its welcome by hour five.

How old school are you?

This all isn’t to say there’s no merit to the senseless and repetitive combat, but I can’t help but think that playing through Shadow Warrior in small chunks will help make things more palatable.

If you have a love for ‘old-school’ design when it comes to shooters and if you don’t mind humour that’s so lowbrow, its practically subterranean, then you’ll have fun. For everyone else, best to avoid it.