Sniper Elite III, Rebellion’s latest cranium-splitting ‘snipe ‘em up’ arrives with a bang. The series’ infamous ‘kill-cam’ is as gory as ever and those nasty Nazis are still absorbing your bullets in gloriously gruesome slow-motion. Now set in Africa, the levels you’ll be skulking around are larger than any previous Sniper Elite games and offer you loads of options on how to approach your target. The bigger levels, on top of enemies with A.I. that you can gleefully play with, easily makes this the most enjoyable Sniper Elite to date.

You take the role of a sniper. He has a name, but for the sake of this review, and given the fact the character and the story he resides in are as generic as hell, we’ll call him ‘White, Male, Shaven-Headed Protagonist #2375’. Good old #2375 has to carry out a number of objectives against some Nazis in an effort to help the good guys win World War 2.

You have the ability to crouch and crawl through areas, and you’re also gifted with the skill of being able hold your breath. It’s this holding your breath ability, which causes time to slow down and your vision to zoom in, that makes you an elite sniper. See what they did there?

You’ll need to make full use of your talents to remain unseen and you’ll also want to take shots from a great distance as, although you’re a great marksman, you’re not much of a bullet sponge. Direct confrontation with the enemy will see you die quicker than you can say ‘this is a stealth game you dummy’. 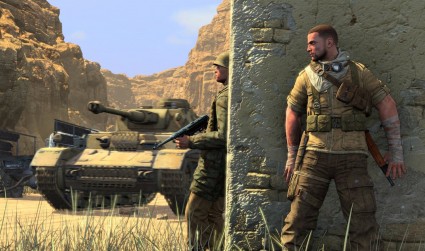 Two choices. Hide or kill everything. It’s up to you.

With the odds stacked against you, it makes sense to plan ahead and the game actively encourages this. You’re given binoculars and the ability to ‘tag’ enemies, so that even if they wander behind a wall you can still see a silhouette of them. You can only tag seven enemies at a time, though, so don’t expect to be able to ‘see’ all of your enemies at once.

Instead you’ll need to plan your way through each level. Conveniently placed crates, ancient ruins and abandoned buildings will all come in handy as you creep up on Nazis to silently take them out. This is a game where a little thought can go a long way.

Of course, it’s not just crates and buildings that will help you remain unnoticed. A lot of the levels contain audio distractions, such as stuttering engines, large AA guns or bombers flying overhead. These loud environmental elements will allow you to mask the sound of your gunfire and, if timed correctly, will allow you to pick off your enemies with your sniper rifle without anyone noticing the loud bangs that often precede the game’s gory ‘death-cam’ kills.

Another thing that helps you pick off your enemies is their predictability and the consistent behaviour of the A.I. Whilst enemies aren’t exactly smart, they do try and hide from gunfire, and try to pinpoint the location of where the shots are coming from. Once you’re discovered, they’ll start to engage you in a fight.

This progression from one stage to another means you can often toy with the enemy and you’ll want them to ‘hear’ your shots simply so you can lure them out of place. There’s ample opportunity to really to pull the strings of these soldiers so you can get them to blunder into traps or have them simply shuffle out of the way as they investigate a rock you’ve just thrown.

While the levels and the enemy A.I. offer you plenty of opportunity to be sneaky, they also give you the choice to be destructive. Ammo crates  are carelessly left exposed to a sniper’s bullet and drums of petrol are just begging to be shot at by a silenced pistol. Convince an enemy to stand next to these health and safety violating features and the explosive results will have you grinning and give the soldiers a nice opportunity to claim for an injury at work. Assuming they’re not dead. 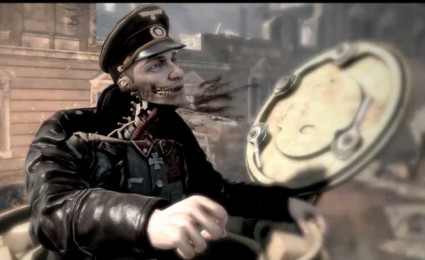 “Have you suffered an injury at work that wasn’t your fault?”

The level of choice you have when it comes to getting through levels is really Sniper Elite III’s biggest strength. Levels can be approached in a number of ways and although the game’s ability to kill you very quickly does force you to be somewhat cautious, there’s still plenty of opportunity to blow everything up, sneak in, stealth kill or just generally complete the mission however you see fit. It makes the process of dying much less frustrating as it could have been, providing you with an opportunity to tackle whatever caused your demise in a different way.

One of the other parts of the mission structure that promotes exploration and differing playthroughs is that each level also has sub-missions that go along side the main objective. It has to be said that the actual tasks you’re carrying out are a little samey and not too original. You’ll be collecting intel, taking out specific targets, rescuing people and then providing them cover fire as they escape. Things that have all been done before and although doing them is fun thanks to the level design, it’s hard not to feel a slight sense of déjà vu as our hero (#2375) rescues ‘White Man With Moustache #32’.

Still, even if the missions and subsequent side-missions aren’t too ground-breaking, you may find they’re worth getting through as they provide experience points. Sniper Elite III has a fairly rudimentary levelling system that allows you to unlock new items for your loadout.

It is nice to be able to alter what side-arm, sniper rifle and other supplies you take into each mission, but I found that these changes didn’t really alter the way I played. You could easily be forgiven for not even noticing the loadout screen at all and playing through the whole campaign without changing a thing. 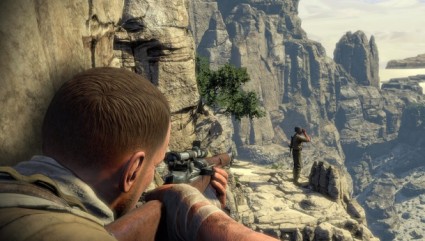 This gun, that gun or another gun. It’s all the same.

Another element that you could easily miss is multiplayer and co-op. Multiplayer feels like it could be something great if more consideration was placed on the design of the maps. To have a sniper battle where teams are made of spotters and snipers could be fresh and original.

Instead, multiplayer collapses into the madness of simply running around and shooting people up close; there’s no incentive to snipe people from afar if all you’re after is the highest number of kills. There is one mode that does multiplayer in an interesting way, where the furthest distance kill wins, but this soon becomes frustrating as lining up the perfect long-range shot is interrupted by someone shooting you at point-blank range.

To complain about the multiplayer any further would be a little bit harsh, though. No one’s buying Sniper Elite III for it’s online play. Sniper Elite III is about shooting people from far away and witnessing the gruesome consequences. It’s about creeping from the African desert and having no-one notice that you’ve stolen some important documents. It’s about blowing up tanks by shooting their needlessly exposed fuel tanks.

Sniper Elite III is by no means perfect, but it sure is a lot of fun and contains plenty of satisfying moments. You’ll never forget the first time you shoot a Nazi’s balls from 200m away.