Left 4 Dead, Call of Duty: Zombies, DayZ, Dead Island… there’s certainly been no shortage of zombie-shooting games this generation. For whatever reason, we just can’t get enough of decapitating the rotting heads of shambling, brain-dead corpses.

The oncoming horde of titles shows no sign of slowing either, with the release of Rebellion’s new third-person shooter, Sniper Elite: Nazi Zombie Army. Yeah, you read that right: Nazi. Zombie. Army.

History in the unmaking

The starting scene of Nazi Zombie Army will be familiar to any fan of the Hitler Downfall parody videos on Youtube. In a dimly-lit Berlin bunker, three nervous generals exchange uncomfortable glances as they prepare to tell their Führer some very bad news. Except this time it’s not that his Xbox Live account has been banned, or that Chuck Norris has been dispatched to take him down.

In fact, their message bears much more resemblance to the Downfall original: Germany’s loss of the Second World War is imminent. What doesn’t resemble the original however, is Hitler’s response. “The Fatherland will not fall! Execute Plan Z!” he cries, as he orders that droves of festering zombies be unleashed upon Europe in a last-ditch attempt to defeat the Allies. The Discovery Channel this is not. 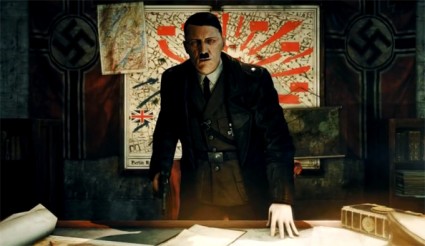 Who needs tanks when you have the living dead?

After this short but sweet opening cinematic, exposition is particularly thin on the ground. You play as one of the last living humans in Berlin, and have to survive whilst putting a stop to the undead army that is hankering for a snack on your grey matter. Good luck, and all that.

More zombies than you can shake a scope at
As you’ll no doubt be aware, the concept of Nazi zombies in games has been done before, Call of Duty: World At War being the most popular example. Nazi Zombie Army is actually much closer to Left 4 Dead in design, however, with levels to traverse through and basic objectives to complete as opposed to just surviving for as long as possible.

It truly is a Nazi Zombie Army, as well. Not to my knowledge has another shooter been released that manages to cram as many zombies into one level. There are swarms of the things, all ambling towards you with hangdog expressions and limp and crippled limbs.

Whilst a good proportion of foes are your typical brain-dead corpses, there’s a little variety thrown in there too. Some of the army consists of skeletons, which are fast, creepy and vicious, but lack the quaint charm of your typical living dead. Other more elite enemies include enraged suicidal zombies that hurtle towards you with stielhandgranates; green-eyed creatures that can leap enormous distances and snipe at you from rooftops; and unbelievably tough blokes that fire assault rifles and withstand countless shots to the head.

Being set during WWII, you’re given the selection of a roster of classic weaponry with which to dispatch your reanimated assailants. All of the sniper rifles you’d expect are present such as the Springfield and Lee-Enfield, while backup weapons include the Thompson submachine gun and Luger pistol. Unfortunately, backup is the extent of their usefulness; many suffer from limited ammo and rubbish damage, as well as a shunning from the scoring system which is weighted heavily towards long-range kills.

It’s a good job that the sniping mechanics are well implemented, then. As any zombie apocalypse fiction would teach you, you’ll want to be aiming for headshots, so sniper rifles are a perfect fit in a game of this ilk. In no time you’ll be plucking off undead noggins like tomatoes from a stalk, and the ‘X-Ray’ feature makes a reappearance from Sniper Elite v2 to show the fruits of your efforts in graphical detail. Every lethal shot you fire is accompanied by a slow-motion killcam following the bullet as it rips through rotting flesh, severing vital organs, shattering spines and pulverising brains. 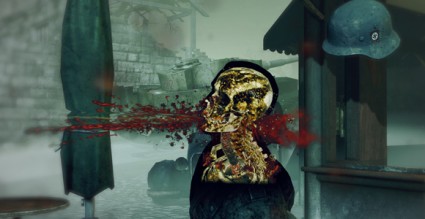 Nice shot chap; hats off to you.

The first few times you see it will elicit the response of a 12-year-old boy watching a nasty horror flick whilst his parents are out of the room: “Coooool!”. Then it starts to lose the novelty a little, so you turn down the X-Ray frequency in the settings menu. Then you turn it down further. Finally, you set it to ‘minimum’ or turn it off entirely, fed up of gameplay being interrupted by a slow-mo sequence every three seconds.

A more serious frustration with Nazi Zombie Army is its difficulty. Much of the levels are perhaps a little too easy, intersected with occasional boss battles and onslaughts that are too hard. Sometimes the game throws an obscene amount of zombies your way, and the only practical way to deal with these is explosives. Of course, these are in limited supply. Grenades are a godsend, but land mines, dynamite and trip-wires take too long to set up, making them near-useless in many scenarios.

In fact, I do not recommend you play single-player, at all. Ever. It’s much less enjoyable and you lose the ability to be revived, instead having to restart at infrequent checkpoints. This game is designed through-and-through to be played co-operatively, and with no AI comrades it fails as a single-player experience.

Pretty fly for a dead guy
It’s no secret that a title like this is hardly triple-A material, but Nazi Zombie Army is impressively well-polished in the visuals department. Zombie animation is suitably disturbing, while the X-Ray camera is gory brilliance; it’s just a shame that you can have too much of a good thing.

The star of the show is the atmospheric lighting and shadows, giving much-needed ambience to the levels, all of which have solid art design. Glowing fog and mist choke the ground amidst a war-torn Berlin, creating an aura of classic horror movies.

Braaainsss… err… gehiiirne… gehiiirne!
Another nod to horror films is in the soundtrack, which consists of bizarre synth-style music that would be right at home in a B-movie. There’s something unsettling and incongruous about it which makes its inclusion both completely unsuitable and absolutely perfect.

Deafening roars emit as large hordes of undead spawn, and the enraged, maniacal screams of a suicidal zombie sprinting towards you will produce a feeling of dread in the pit of your stomach every time, guaranteed. It’s everything you could hope to have seething from your headphones as you play late into the night. 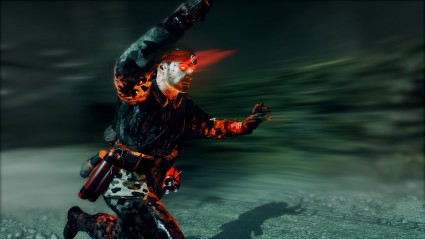 A pant-wetting sight for any zombie apocalypse survivalist.

Sanity in numbers
Hermits beware: if you’ve been paying attention so far, you’ll know that Nazi Zombie Army is a game that should be experienced with others. Not only is the balancing a little skewed, but other design flaws are less grating when accompanied by other players in co-op.

The game only has five levels to its name, but when the objective 90% of the time is ‘kill lots of zombies’, it’s no wonder that a feeling of repetition sets in. Worse are the boss battles, of which there are only two. Except, it’s the same enemy, both times.

Other issues include a dodgy cover mechanic which is almost entirely pointless, and a skull hunt on the last level where the developers got bored of spreading them out and just lumped the last few together. Be prepared to be ambushed by game-breaking bugs now and again too. Twice I had to restart a checkpoint or level; once because a door wouldn’t open, and the second time because my character became trapped in scenery.

Yet, in some ways I’ve been a little harsh. Because crucially, Nazi Zombie Army succeeds in what it attempts to do: creating an entertaining four-player co-op zombie game. It never tries to be anything more than a mindless shooter with fundamentally satisfying mechanics, throwing cheesy action and gratuitous violence in for good measure. It’s the perfect game to be enjoyed with mates, and I had a blast with some strangers during my time with the game, too. 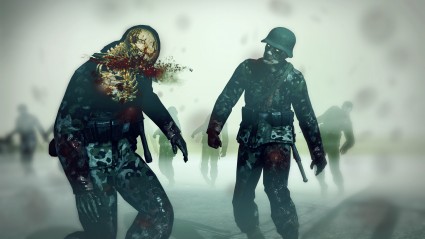 Mein conclusion
I haven’t even revealed one of the best selling points yet: the price. At £9.99, it’s a budget title with surprisingly strong production values for the most part. It’s short, but at this price you don’t feel short-changed.

With Sniper Elite: Nazi Zombie Army, you get exactly what it says on the tin: a fun zombie shooter that doesn’t take itself too seriously. Most will delve through the brief campaign, perhaps repeat a few of their favourite missions and then uninstall it from their Steam library, perfectly content with an experience that was enjoyable while it lasted, but could have outstayed its welcome had it been much longer.

For any connoisseurs of mass zombie genocide, you could do a lot worse than Nazi Zombie Army. Just don’t be a hero: take on the army with friends.