Having never owned a SEGA console at any time in my youth, I’d missed out on a lot of titles in one of my favourite genres: fighting games. I’d failed to experience the tight, technical combat of Virtua Fighter until the current generation, but I’d also missed out on other popular titles, such as Fighting Vipers and Sonic The Fighters.

Luckily, you can trust Xbox Live Arcade and PSN to provide the ability to put such situations right, and recently SEGA ported three of their most beloved fighting classics to home consoles. Having just forked out for a slick new fight stick, I was all too happy to volunteer my services and put these games to the test.

First up was Sonic The Fighters. With no prior experience, the game appeared to be Virtua Fighter with Sonic characters; unfortunately, it’s less than that…

Dr. Robotnik has done something or other, friends must fight…
If you’ve ever hoped that one day you could punch the living daylight out of all of Sonic’s annoying friends, then in concept, this should be the game for you. You can pick one of nine fighters (one’s a secret!), and battle through eight stages, before tackling the game’s three boss characters.

According to Wikipedia, there’s a bit more of a story to it than this, but it’s never apparent from within the game… 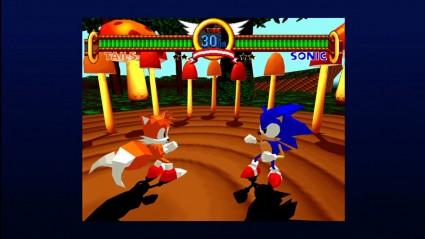 They were once best buddies...

An hour’s worth of content
Sonic The Fighters is a very basic fighting game. With just one punch, one kick and a block at your disposal, fights won’t be the type of intricate dance you’ve come to expect from other fighting games, and thusly, its long-term appeal becomes pretty limited.

It’s also not helped at all by the fact that most of the fighters in the game are pretty much interchangeable, never handling differently enough to be worth playing around with. Whether you’re playing as Sonic, Tails, Amy, or whoever, the core style of combat never actually changes meaningfully despite them having different move-sets and throws.

You’d hope that the opponents would help provide some variety in that case, making you change your gameplan, but it ends up as if you’re fighting the same character over and over. Sure, some characters like Bean the Dynamite can spam bombs at you, and Espio might be easier to beat with kicks than punches, but you never lose that sense of repetition. This is something that the Street Fighters and Mortal Kombats of the industry manage to avoid quite easily. Older games too.

Blocking is probably the most interesting mechanic in the game, but even then it’s pretty basic. When players block, they can only take so many hits before their barrier breaks, and you only get a handful of barriers each round. This should mean that if you play too defensively, you’ll be left without a defence and be forced to fight, but the short, 30-second round times negate any potential strategy that could come from that.

This release’s main problem is that with only two offline modes, Arcade and Offline Versus, you’re likely to have seen all that the game has to offer within as little as an hour. To put it into perspective, I managed to ‘earn’ all the game’s achievements within ten minutes. There’s really no depth to keep you coming back.

Loves to ‘Block’
Sonic The Fighters is a total product of its time, having seen no real facelift anywhere except for the menus. It will have looked great back in 1996; however, it’s clear to see that it’s not aged too well at all, with very square, blocky characters.

It at least captures the feel of Sonic the Hedgehog’s universe perfectly, with each stage appropriately inspired by levels from the series. It’s a joy to start in the Greenhill zone, and work your way to Robotnik’s Death Egg. 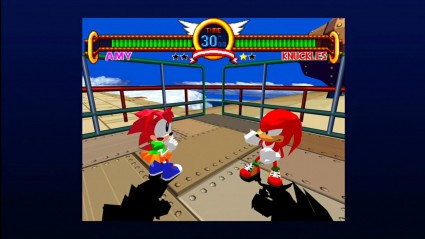 Sonic Boom?
Audibly, Sonic The Fighters typifies the 90’s arcade fighting game, with remixed, upbeat Sonic-themed dance numbers and J-pop layering the entire game. It sounds just like Sonic too, with familiar tones such as rings falling out of your character when hit, while the boings and spins of Sonic’s platforming adventures are used to good effect in combat.

One-on-one
Taken online, Sonic The Fighters gets a little better, and the best thing I can say about it is that it works. You’re limited to basic friendlies and ranked matches, and I experienced no lag whatsoever in the fights I took part in.

The problem is that the simple combat doesn’t make for a very exciting multiplayer, as strategy and thought makes way for mashing one-button combos. Again, there’s a crippling lack of depth for the asking price.

Wish I hadn’t bothered getting my fight stick out!
Although maybe once fondly remembered by SEGA fans, this XBLA/PSN release is for achievement hunters and the nostalgic only. Hardcore fight fans and casuals will both fail to see the point or any value from their investment, outside of an hour or two.

Give it a miss unless you’re a long-time fan.