Due to the relentless, factually incorrect claim that the Vita “has no games” (when in reality it has many and most have been releases of the highest quality), there has been some unnecessary pressure placed on Keiji Inafune’s Soul Sacrifice to deliver as the system’s ‘killer app’.

Is it the game that the naysayers have been waiting for, or is playing it a sacrifice in itself?

In the fantasy world of Soul Sacrifice, you play as an unnamed, normal human, captured and about to be sacrificed by a world-conquering, out-of-control-sorcerer known as Magusar. A fellow captive breaks free and fills you in on some of the finer details while trying to aid your escape, but is swiftly caught and made a bloody example of. It transpires that the poor soul was actually a sorcerer himself and had some knowledge of Magusar, and all his memories are stored in a living, talking book known as Librom. Librom, by pure chance, is now in your possession.

With the book under your control, you can now read it to relive the author’s epic battles, learning and developing his magical powers the further you progress. As per the old adage, knowledge really is power; by vicariously reliving the adventures told within Librom, you can eventually become powerful enough to take on Magusar yourself and end his tyrannical reign.

The game’s structure, though, doesn’t really allow for typical story-telling. With the main plot broken up so heavily by the need to do side-quests to become powerful enough for progression, its otherwise compelling tale becomes fractured and disjointed. How it’s told is compelling at least, with the entire story told before and in-between missions by Librom and voice-overs by the now-deceased author. 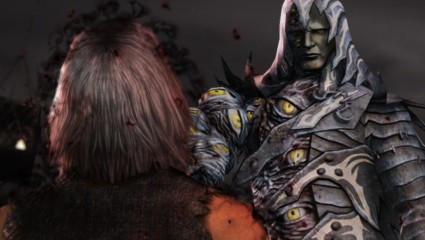 This man will eat your soul…

The NeverEnding Story, but with blood
Librom acts as the game’s central hub through which you manage all aspects of the game. Through his many menus you’ll jump into missions (which take place in decently-sized open arenas), develop your character’s powers (while fusing them together to make stronger ones), manage your available party members, and any of the other non-combat related functionality.

The missions themselves, of which there are an insane amount throughout, are fairly short, but perfect foil for gaming on the go, allowing you to play through in small chunks here and there throughout your day and still feel like you’re making progress. There is, however, a lot of repetition here that unfortunately dampens an otherwise solid combat experience.

For example, over the course of story missions and side-missions (named Avalon Pacts), you’ll keep revisiting the same open environments ad nauseum, and there’s limited gameplay variety due to only a handful of recycled mission types. The most common has you killing a predetermined number of low-tier enemies in a given arena, while another might have you trying to find hidden Soul or Life Shards. The fights against Archfiends (bosses) are the most fun, though, offering large-scale, challenging battles that require thoughtful use of your powers.  Sadly, repetition creeps in again, as you’ll keep fighting the same enemies over and over, with creatures only slightly re-skinned in accordance with their theme.

Because of this, it’s a game best played in small doses; long play-sessions quickly become a slog. As you can imagine, having to review the game in as quick as time as possible meant that it eventually became a monotonous chore and, after as little as 15 hours, the thought of playing for more than an hour at a time started to fill me with a slight dread. I have a decent attention span too, so it’s unlike me to feel this way so soon. This isn’t totally the game’s fault at all, let me be straight; it’s tailor made for taking up small chunks of time with explosive action and it does many things right in spite of it.

The combat is undoubtedly one of those things thanks to a tight, fluid, strategic rhythm of attacking and dodging. Pre-fight preparation is essential, though, as you have to consider your enemies’ elemental weaknesses, their strengths, their range, and then choose a weapon-set of six to suit. There are tons of weapons and powers on offer, awarded for completing missions, and you’ll find swords, projectiles, summons and buffs amongst their ranks. There is a pretty deep upgrade system in which you can boost their power and lifespan by combining them with more of the same type, but with the fuse system, which acts as a lite alchemy option, you can produce weapons from any number of recipes.

Managing your powers in combat is also something you need to be mindful of, with each attack having its own limited lifespan. Should one break in this way, you won’t be able to call upon it again until you’ve mended it in Librom using a substance called Lacrima, which is earned outside of gameplay by wiping the collected leakings from Librom’s disfigured eye. You can, however, renew your weaponry’s life-span in battle before it breaks by using one of many hidden intractable points in the environment.

Whenever you kill an enemy, its original form writhes on the ground waiting for you decide its fate. With this, you can either save its life or sacrifice it with one of the shoulder buttons. This is how you level up in Soul Sacrifice as, depending on your choice, you can increase your defensive or magical levels once you’ve built your meter enough in either category. 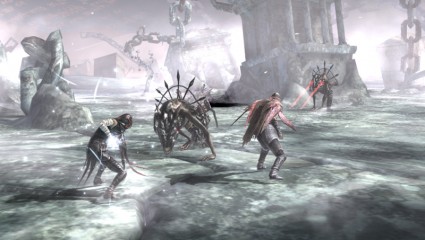 When you beat a boss, however, their original form is always human, and they offer the best returns when choosing to save or sacrifice. When you do save, the downed human will be available for you to call upon in side-missions, with a maximum of two cohorts allowed to follow you into battle. This is both a blessing and a curse: the extra firepower and their ability to revive you is invaluable, but be warned that you are as susceptible to their liberally directed attacks as the enemy is. It’s frustrating to have stunned a boss and to be running in for a safe assault, only to keep getting hit by a wayward projectile and missing your attack opportunity as a result.

The save/sacrifice quandary does also come into effect with your party members too. Should they have their energy depleted during a fight, you can save them at the expense of some of your own health to get them straight back into the fight, or you can sacrifice, taking them out of the equation but also dealing massive damage to enemies in the process. Once dead, your fallen friends can be resurrected within the pages of Librom, but you must spend hefty amount of Lacrima to do so.

While some of the attacks can feel a bit weedy, that can’t be said of the Black Rites. Earned at certain levels through, Black rites are one-use, devastating attacks, best used towards the end of a fight. Their usage does truly require a sacrifice, though, semi-permanently affecting your stats, such as one that halves your defensive power. You can restore your stats and recharge the ability once again using, you guessed it, Lacrima, which is certainly this world’s WD-40, no?

Judging a book by its cover…
Despite some muddy texturing, on the whole Soul Sacrifice is a lovely looking game with very few technical hiccups. The characters all fit this wonderfully realised fantasy setting, though it’s the enemy designs that remain the most memorable aspect thanks to their twisted, horrific and sometimes bizarre takes on some classic mythology. The arenas too are impressive in size and scope, though they do seem built to simply tick a box of stereotypes with sandy, icy, watery arenas offset by standard green fields, castles and mountain ranges.

The presentation that surrounds it all is truly brilliant, though. The pages of Librom always seem alive, and the cut-scenes and text that adorn his leaves detail all the grisly events in a suitably creepy and threatening manner.

Soul man
Soul Sacrifice is blessed with a gloriously epic original score that is rousing, dramatic and inspiring and at its most stirring in combat, helping to emphasise the grand scale of the game’s battles. The gloomy, mournful tones that faultlessly supplement the other areas of the game hit just the right mix of mystery, terror and despair.

With the story presented how it is, there is an amazing amount of voice-acting, mostly from Librom and his previous owner as you’re regaled with tales of what came before. The fellow sorcerers that accompany you aren’t mutes though, and boy will you know about it. Their regular battle cries and criticism of your skills will start to annoy you pretty early on.

What sorcery is this?
All the game’s side-missions, the Avalon Pacts, are available to play in co-op with three others online, but the multiplayer inclusion doesn’t really change gameplay one iota. In fact, it plays almost identically, although should you be downed, you’ll have to contend with the unpredictability of your co-op partners as they get to choose whether you live or die.

The great thing is that you’ll get to keep all the experience and weaponry you acquire when you decide to go back to playing on your own, so it might at least give you some impetus to grind and increase your power a bit along the way.

Honestly, though, the online mode made so little impact on the overall experience that I much preferred to play it alone. 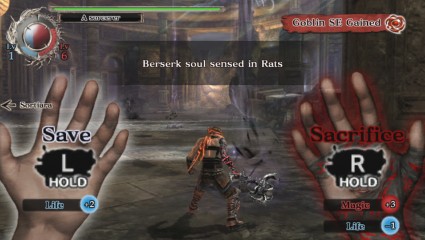 Save or Kill. Only you can decide.

Souled out?
Soul Sacrifice‘s intrinsic repetition means that it’s a game that treads a very fine line between worthwhile action RPG and tedious grind. If you’ll excuse the pun, it’s far from a soulless experience though, as the world exudes plenty of charm, the story, although disjointed, is worth experiencing, and there’s plenty to like about the game’s combat and weapons systems along the way.

Its problem is that too much of a structure like this can leave you going through the motions for the sake of completion. When a game gets to that point and you’re just playing to tick boxes rather than for enjoyment, then it’s never going to prove much fun in the long run. That’s unfortunately a point I reached pretty early on, despite the fun combat and everything else I admired.

With that, I fear that Soul Sacrifice is a game for a certain type of player only, and I have absolutely no doubt that for many people it will prove to be an invaluable purchase. For everyone else, try to stick to small play sessions or risk becoming incredibly tired of it once it gets going.