Sam Fisher’s had a rough old time. He’s always having to save the world, he never gets thanked for it and he’s forever crawling through air ducts. That’s no way to treat an American hero!

The latest in the Splinter Cell series is Splinter Cell: Blacklist and it treads the fine line between making something new and trying to be familiar enough to please the fans. How well does Blacklist straddle this line? Let’s find out.

Firstly, here’s the story. A group of terrorists want America to remove all of their troops from countries that aren’t America. Failure to do this will result in a series of targets will be blown up. Basically, ‘send your troops home or we’ll blow up your country bit by bit’.

There’s meant to be some familiar characters, such a Grim who apparently appeared in the previous games. The problem is, I found the characters so nondescript throughout all of the Splinter Cell games (including this one) that I never once thought to myself ‘oh good, they’re back’. The only character I truly recognised was Sam Fisher and even he’s had a make-over and a change in voice actor.

The story and characters aren’t particularly interesting and won’t really be a selling point to anyone. If anything, the motivation behind the characters is a little suspect at times. There are hints at a themes such as ‘how far is too far’ and ‘do the ends justify the means’, but they’re handled so poorly, it’s kind of a disappointment rather than an indifferent excuse to travel the world.

It’s also far too serious at times. Jargon is used to add authenticity but just made me confused and led to eye-rolling. Sam’s story offers no humour whatsoever and the only slight comic relief came from an annoying computer nerd who just didn’t fit in at all.

Still, at least the story means you get to travel the world and leads to a variety of locations which helps give the game a good range of level types. Much like the story though, the locations are fairly straight-laced. All of the levels are kind of what you’d expect: 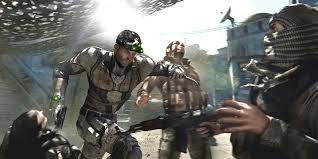 Wow. A game that involves shooting people AND it’s set in the Middle-East? Who could have guessed!?

Your name’s not on the list
Whilst the locations aren’t particularly interesting on paper, they’re extremely well designed and play into the game’s strengths unbelievably well.

Anyone who’s played Conviction will have a good idea of how Sam Fisher controls. Holding down the X button (‘A’ on the 360) will allow you to sprint around the levels and carry out contextual moves. For example it’ll allow you to vault over obstacles, hack objects and open things.

For the most part, the use of the X button as a catch-all works OK, much like in many other game. There are only slight issues that arise when you come across actions that are bunched too closely together. For example, when wanting to place a camera under a door, you may accidentally open said door. This will result in your face being shot. Another example would be an air duct that you want to crawl into, but instead you’ve got the camera angled slightly too high and instead jump and hang off a steel pipe. This also ends in you getting shot in the face.

This fairly minor gripe aside, Blacklist has distilled the Splinter Cell formula into its most playable and forgivable form. The patience required to silently take down an entire room is rewarded by a huge sense of satisfaction akin to Batman: Arkham City. If you happen to lose your cool and engage in a gunfight, you’re also rewarded by being able to make use of a wide range of weapons, enjoyable combat and some badass takedown moves.

It’s safe to say that the designers of Blacklist allow you to play the game your own way, but the bonuses available for completing the game in a stealthy manner are hard to ignore. More money is gained by avoiding enemies entirely and it’s this money that’s used to improve Fisher’s loadout.

Luckily, Blacklist’s AI works in a smart way and, most importantly, a consistent way. You’re always aware of just how visible you are thanks to lights on your back and a meter lets you know just how aware enemies are of your presence.

It’s a great testament to Blacklist’s design that each level can be approached in a huge number of ways, all to suit your own play style. Stealth is encouraged by the large number of ledges to climb and lights to shoot out. If you’re after a more action-orientated adventure, use the waist-high cover to your advantage as well as making sure you stock up on grenades.

Speaking of grenades, how you load out Sam Fisher will go a long way to dictate how you go through your mission. Sleeping gas or an incendiary grenade? A portable camera or a mine? It’s these decisions which you’re given every mission that make Blacklist the Splinter Cell game you want it to be.

Hitlist
Blacklist contains some impressive visuals, plain and simple. Technically, the game’s impressive but much like the story, there’s no real ‘flair’ to what you’re looking at. There’s only so interesting a military prison can look.

What the visuals do best is convey different ways to approach missions. Air ducts and climbable pipes are visible when using your sonar-equipped night-vision goggles, and there are a number of subtle visual cues that make playing the game that much more intuitive and pleasing to look at. 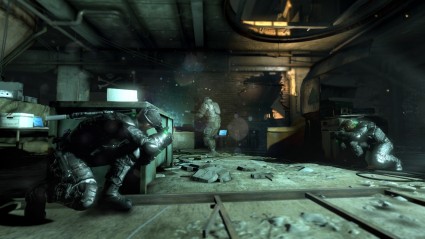 The shadows are your friend. This means you should probably go out more.

This also extends to the game’s animation. Fisher leaps, punches and crawls as well as he’s ever done. I thought he was meant to be old, but it seems that Ubisoft have gone for something of a partial reboot here as some of Sam’s age and gruffness has slipped away.

It should go without saying that this Splinter Cell title has outstanding lighting. I don’t want to get nerdy here, but it really helps that shadows are casted in such a realistic way, especially when you consider how important it is to use the darkness to your advantage.

Listless
The audio with the game plays a part, but is nowhere near as important as the lighting and shadows. Sam can call out to enemies to get them to alter their patrol routes and he also has a number of gadgets that emit attention-grabbing audio. Other than that, most of what you hear within the game is nothing more than serviceable.

Music is orchestral and as dramatic as you’d expect from a game trying to ape TV shows like 24. It also has to be said that the voice-acting is equally serviceable. Now, it’s hard to say that it was the voice actors’ fault that I didn’t care about the characters when the story is so by-the-numbers and full of cliché. For example, Sam Fisher tells someone to ‘take the shot’. How many times have you heard that said? For me, I merely sighed, which I’m sure wasn’t the developer’s intention.

Playlist
Another feature that had some attention drawn to it was the re-introduction of multiplayer modes. Labelled as ‘Spies VS Mercs’ it sees a team of armoured guards protecting a bunch of terminals that spies are trying to hack. It’s safe to say that the re-appearance of this is a huge bonus. Mostly.

I say mostly because of one simple fact: half of the time you’re playing multiplayer you’re playing as a Merc where you’re hunting down Spies. When playing as a Merc, Blacklist tries to play like a first-person shooter and it just doesn’t do it very well. Movement feels like you’re controlling a floating camera rather than an armoured guard. It’s not exactly the worst thing I’ve ever played, but I certainly didn’t look forward to playing as a Merc. 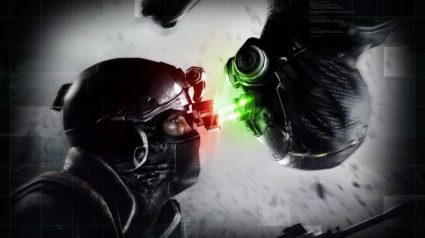 Didn’t I see this scene in that Spider-man movie?

Playing as a Spy, on the other hand, is great. There’s a real thrill to stalking real-life prey and creeping up on them from behind to knock them out. It also helps that there’s a selection of gadgets that carry over from the single-player campaign.

It’s not all about competing against others though, as Blacklist contains a number of non-compulsory solo and co-op missions to play through. At first, I ignored these entirely to focus on the campaign’s missions. I thought I didn’t need to pay these missions much mind as all they’d do is give me extra money, which I didn’t need. I was so wrong.

Some of the non-compulsory missions are an utter joy to play through. Without the conceit of a story to shoehorn into a level’s design, Ubisoft have gone to town on the stand-alone missions and filled them with a huge number of ways to hack terminals, wipe out a room of enemies or collect intel. They don’t need to be done but give them a go and you’ll quickly want to complete them.

Top-ten list
In summary, Blacklist is a joy to play even though it tries its hardest to appear joyless. A boring story alongside dull characters can’t damage the fun that’s to be had and the choices to be made within each level.

I’ve made it clear that Blacklist isn’t going to win awards for its characters or its story. The best thing about Blacklist is playing Blacklist. Skip those cut-scenes. It’s what the start button was made for.