Of all the recent Mario releases, the one that achieved the most collective praise was the superbly imaginative Super Mario 3D Land, the series’ first appearance on Nintendo’s then-ailing 3DS. For me, 3D Land represented not only the most fun I’d had with a Mario game since the N64, but it was also arguably the start of the 3DS revolution; a pivotal moment from which we’ve seen the handheld go from strength to strength.

Two years later, and with the Wii U in a similarly precarious position, Nintendo are surely hoping that 3D Land’s successor, Super Mario 3D World, can have a similar effect on their faltering home console too.

I truly, truly hope that proves to be the case, because a game like Super Mario 3D World deserves every success.

On face value, Super Mario 3D World takes many structural design decisions from its 3DS predecessor, but it doesn’t just expand on already great ideas; it surpasses them in imagination and scope.

Once again, impeccable and ingenious level design represents a meeting of past ideologies. Mario and pals (including Peach this time!) must get from the start of each level to the flagpole at the end before the time runs out, exactly as you would have in 1985. However, rather than just going from left to right, you have complete 360 control, in line with the likes of Mario 64, Sunshine or Galaxy. No two levels are the same, but amazingly the next is nearly always as wondrous as the last. There are generally (sometimes more, sometimes less) three green stars hidden in each and, as has been essential in more recent Mario games, these are required for progression thanks to certain missions and end levels taking into account your overall tally.

Each star, like many of Super Mario’s wonderful secrets, are hidden just off the beaten path and may require an unconventional approach or swift thinking to obtain. These are really fun to find in the chaos and it’s always satisfying when your curiosity leads you to find something new:

“What’s behind that box?” “What if I climb this wall?” “Does that look breakable?”

These are the sorts of questions that will lead you to some of 3D World’s greatest treasures. 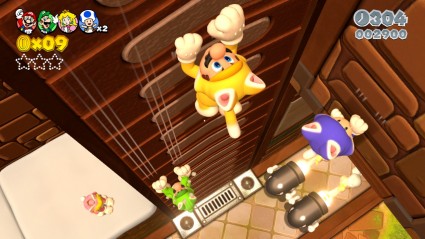 When Peach told Mario she was investing in Cat Suits, this isn’t what he had in mind…

Secrets aren’t only reserved for levels either; the new free-roaming world-map has plenty to find by exploring. Whether it’s a hidden area with a new challenge, Toad’s shop or a fruit machine bonus for extra goodies; there is plenty to find no matter where you are.

The new power-ups steal the show, always offering new and interesting ways to play and fight. The much-publicised Cat Suit is as much fun as you’ve heard, allowing you to run faster, scratch enemies or climb up any surface with the ease of which my own cats scale our beleaguered curtains. Other cool tricks, like the torch box that lets you deal with ghosts and typically bashful Boos a little more permanently, or the Goomba suit that allows safe passage amongst enemy grunts, are all implemented seamlessly and sit well alongside returning favourites. Fire Flowers, Boomerang Costumes and the Giant Mushrooms that see you go all Godzilla on the world’s inhabitants are all here and used in brilliant new ways.

One power-up I both loved and hated was the Double Cherries, which produce a clone of your character. The more cherries you get, the more clones you get, but the catch is that they all control with your one input. As you can imagine, this gets pretty hectic to control at times, especially if they get spread out. The potential for chaos is multiplied tenfold if playing co-op and both of you are munching these red delights. That, I suspect, is pretty much the point, and they do have some incredibly clever uses in particular circumstances too.

3D World as a solo game is great, but playing with friends is huge fun, forcing you to work together in close proximity but still encouraging a gentle competitive edge. The first and highest on the flag gets extra points, for example, while the player with the most points at the end gets to wear a fancy little crown in a subsequent level.

That said, mild frustration can occasionally set in as the frantic charm boils over for reasons beyond your control. As with New Super Mario Bros. U, it’s very easy to knock or throw your co-op partners off ledges by unintentionally trying to occupy the same space or grabbing them by mistake. The latter happens all too often because the dash is assigned the same button as the grab, something that could have been completely avoidable. There’s added confusion too if you become separated, as the usually dependable camera zooms a little too far out in trying to cater for both of you. Still, most of the time death will ultimately be your own fault, and even the most ridiculous and avoidable deaths resulted in laughing fits with my co-op partner.

Speaking of deaths, 3D World is much less forgiving than any of the Mario games since 3D Land’s release in that it provides a very challenging platforming experience and doesn’t throw extra lives at you every few minutes. There’s a decent penalty for death without being obnoxiously difficult either: run out of lives now, and you’re simply kicked back to the world map. You’ll have a new set of lives, but your mid-level checkpoint and any other progress you made in that stage will be lost. If you fail too many times you still get presented with the option of a Golden Tanooki suit, but it’s entirely up to you if you want to take it. 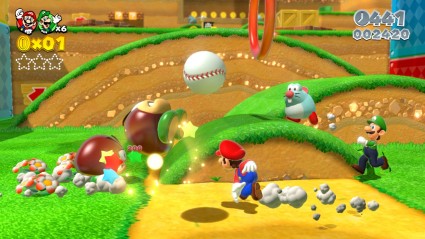 It was definitely great to see Mario brought into the high-definition era in Super Mario Bros. U, but 3D World is easily the series at its most visually stunning. The classic, bold colours remain intact as do age-old designs, but it’s the little things, like the new level of detail that makes all the difference. Trees, grass and rocks have beautiful texturing now, whilst lighting and even the occasional weather effects are lovely and surprising. Even characters now look better than they ever have before, especially noticeable when you don one of the powered-up costumes.

Lastly, I have to pay special praise to the immensely varied soundtrack, because it’s so… un-Mario. New happy fanfare, catchy jazz, dramatic orchestral arrangements, even cock rock – no musical genre is off limits in 3D World, and while most of it is entirely new, it’s all magnificent. It’s easily one of my favourite new soundtracks from last year’s releases.

Powered-up
The dazzling visuals and marvellous soundtrack are the first things that impress in Super Mario 3D World, the tight mechanics and new power-ups thereafter. Yet it’s the exceptional level design, in which energetic and wild ideas were allowed to blossom to their fullest that really steals the show. It’s almost a perfect platformer. Almost.

For me, Super Mario 3D World symbolises Nintendo at their most inspired. It’s amazing to think that as folks continue to discuss their relevancy in the modern era, or go out of their way to offer their opinions on how to ‘fix’ the Wii U, Nintendo can still manage to release these magical games worth celebrating.