It’s all too easy to judge a book by its cover and make assumptions based on first impressions. That’s why when I heard the name of the next game I was set to review, ‘Sweet Lily Dreams’, I couldn’t help but groan. It sounded like one of those dreadful free-to-play atrocities you’d find on the App Store or Play Store, the type marketed towards young girls, with flimsy gameplay based around horse riding, dressing up or shopping. Not to mention frequent cues to nudge mummy or daddy to authorise an in-app purchase for a prettier dress or unicorn accessory. What all-but-affirmed this was the equally sickly-sweet logo seen above.

Or not. You see, it turns out that Sweet Lily Dreams is in fact an old-school PC RPG, and a pretty hardcore one at that, consisting of unforgiving combat and torturous puzzles. Although, there is actually a bit of costume changing and shopping involved. Even some interior design. Guess I wasn’t so wrong after all.

Sweet Lily Dreams is brought to us by RosePortal Games, developers of such classics as Whisper of a Rose, and Epic Quest of the 4 Crystals. Yeah, I haven’t heard of them either. Built in RPGMaker, it obviously wasn’t developed with the highest budget at its disposal, and it shows. I couldn’t believe what I was seeing when I fired up the game to be greeted with a screen that was 640 x 480 resolution at best, with horrendous main menu art that looked reminiscent of those cheesy glittering GIFs that kids used to adorn their MySpace profiles with back in the day. 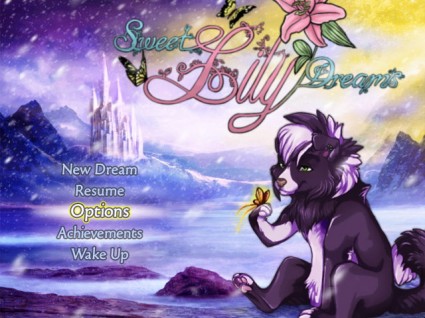 Just look at it… *shudders*

Once you’re into the game, you’re not off to a good start there, either. The controls are seemingly arbitrary. Who needs tried-and-tested standards like WASD? With movement controlled by the arrow keys, CTRL and SHIFT allocated to opening menus, and some weird mixture of Return, Q, W and some other keys in that region for general activities. The game also informed me that to close it down, I can press F12 and left-arrow simultaneously. Innovative! You can control movement and everything else with the cursor, but this is a little inefficient, and movement through this method is hampered by some wonky pathfinding.

For all intents and purposes, Sweet Lily Dreams looks and plays like an RPG from the 16-bit era. Battle is traditional turn-based fare, with standard attacks, magic spells and items to choose from. Encounters sadly have the tendency to drag on, making grinding and even just getting from place to place a chore. What doesn’t help this is the frankly ludicrous evasion rate, which is so extreme that it feels like the enemy dodges practically every other attack. Frequent use of irritating status-effect spells like Blind which makes actually landing a hit practically impossible don’t exactly help, either.

Due in part to everyone flailing around and being unable to land a fireball on a target four feet in front of their faces, combat can be crushingly difficult at times. Grinding is certainly a must, as is carrying round a bucketload of health potions everywhere you go. If you haven’t done either of the two, ‘saving yourself into a corner’ to the point that you’d have to revert to an earlier save (or worse, start the entire game again if you haven’t had the foresight to keep multiple files) is a real and genuine concern once you get into the depths of a dungeon.

Unlike how its name may suggest, Sweet Lily Dreams doesn’t baby you at all, in fact. It seems like a ridiculous comparison, but its tough battles, archaic mechanics and penchant for just letting you get on with it and figure things out for yourself feels relatively Dark Souls-esque at times. After leaving the main town for the first time, I was relieved that my exploration OCD had made me explore the large town in full, discover the item shop and buy a ton of potions beforehand – something the game had not even remotely suggested that I did – as I’d have been screwed otherwise. 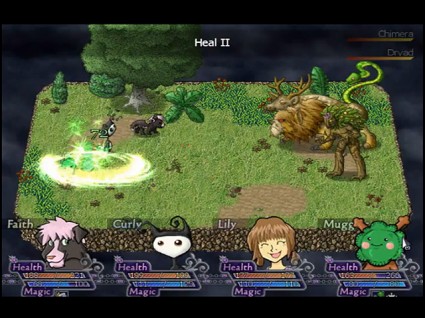 Tougher than it looks, that’s for sure.

So far, so mediocre, and a tad masochistic. Though after mostly despising the game for the first couple of hours, as I persisted and delved deeper I uncovered some redeeming and engaging traits (also not unlike my experience with Dark Souls). The first of these was the surprisingly strong story and characterisation, definitely one of the game’s main hooks. Lily is one of the main protagonists – no prizes for working that one out – who stumbles across an enchanting dream world when she falls asleep, and becomes trapped within it when her curiosity gets the better of her. Luckily she meets Faith, an endearingly foolish dog; Curly, a typically cunning and self-absorbed cat; and Muggles, a weird, jolly tree-teddy-bear-thing, all of whom are assigned to look after her by the Fairy Godmother.

The quartet travel across dream worlds together in order to vanquish Phobius, nightmare creatures that are taking over the dream lands. It’s all enjoyably bonkers, drawing inspiration from various fairy tales and even the odd pop-culture reference, like a Bad Romance Lady Gaga who struts around the town of Rosaria. The plot is rich and expansive, and the characters are really well fleshed-out with entertaining and humorous dialogue.

There are also some unique game systems that set it apart from other RPGs. There’s a crafting system which lets you create your own items and spells from materials you find lying around, and the aforementioned costumes and interior design involve trading coins for new clothing and furniture, all giving various stat bonuses to your party. Breaking up the battles are some fiendish puzzles, which I found utterly soul-destroying at times. They can be seriously difficult, and often rely on trial-and-error.

The visual design consists of some well-rendered sprites and attractive levels (in a charming retro manner at least), with some overuse and repetition letting the latter down, causing some levels to be confusing labyrinths where every corridor looks the same. I am not a fan of the hand-drawn art at all, such as the character portraits. These are akin to something churned out by an eager yet ultimately amateurish hobbyist practising their skills on deviantART. On the other hand, the soundtrack of Sweet Lily Dreams is genuinely excellent and a definite strong point. Various sweeping scores make a great accompaniment to the fantastical worlds you explore, whilst there is also some superbly catchy battle music. 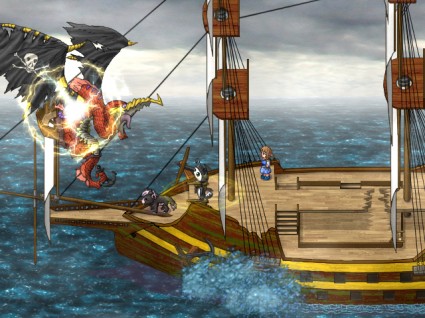 The game’s opening scene, where you first encounter your furry friends.

Sweet dreams?
So, Sweet Lily Dreams is a game of terrible first impressions. If you’re too used to the sheen of triple-A titles, and even that of many of today’s indies too, then the rough edges and lack of polish seen here may put you off. Under the surface there are some good reasons to stick around, however, like the engaging story and charming characters, as well as the wonderful music.

Nonetheless, for me the uneven balance and frustrating combat and puzzles were a bit of a deal breaker. For someone who longs for the glory days when RPGs were a bit rough ‘n’ ready and kicked your ass on a regular basis, like the first few Final Fantasies, then Sweet Lily Dreams may be right up your street, and packs a good 40 hours of gameplay if you’re wanting to get properly stuck in. For the rest of us though, we’re probably best sticking to our modern, gentler-touch RPGs.