The Swapper isn’t a new game. Released on PC about a year ago, it was received with near universal praise. A shame, then, that so few people actually played it. Fortunately, with a bit of help from the masters of Vita conversions, Curve Studios, The Swapper has a new home on all Sony platforms.

Like any good puzzle game, The Swapper makes you wonder why its mechanics and ideas weren’t already present in some other game. Gameplay aside, it also helps that it has luscious visuals, an interesting story to tell and clever puzzle designs.

Yup, The Swapper and consoles – the Vita especially – make a great partnership.

The set-up is a touch clichéd. You’re on your own, a lone responder to a distress signal received emitting from a nearby spaceship. This large, galaxy-cruising people carrier should be teeming with life but there’s not a soul to be seen. Just some large rocks dotted about the place.

While the concept of exploring an abandoned spaceship is a little tried and tested in the world of video-games, The Swapper immediately stands out on its own thanks to some striking visuals. It’s a little hard to explain but the whole game has a stop-motion/rotoscoping animation quality to it. This is thanks to the way that all of the sprites used look like they’re photographs of real world objects. A tin-can being used as an elevator, for example.

The visuals don’t rely on this gimmick, however. There’s a great style to the locations you’ll be exploring, and most are reminiscent of the scene in Alien where they first discover ‘The Jockey’ and encounter that deadly egg. The audio ambience also helps in an understated way with the sound of whistling wind and clanking pipes. It could almost be called calm if it weren’t for the fact it was so eerie. 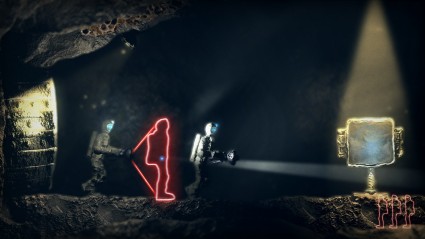 Cloning is a remarkably easy process…

Still, enough of how The Swapper looks and sounds, the real reason you’re here is to know about how the game plays. In essence, The Swapper is a puzzle platformer. You very quickly stumble upon a gun that allows you to clone yourself up to four times and switch between these clones at will. Well, not exactly at will: There are often obstacles in your way. Red and blue lights, for example, will block your ability to spawn clones or switch between them. The clones also mimic your movements exactly, and this often leads to moments where you’re making your clones blindly walk off deadly ledges or get crushed by closing doors.

Of course, you’re not just creating clones just so you can have them killed. The aim is to solve the various puzzles using your clones to collect what I’ll call ‘Power Orbs’. These orbs are needed to help you get off the station and rather unfortunately they’re all placed in areas that are tough to get to.

The Swapper does a good job of introducing new features and ideas at a decent rate to help ensure that you don’t get bored of the basic mechanics of cloning and swapping. Buttons, switches and light sources that affect your swapper-gun all make their debuts at what seemed liked the right moments.

It’s slightly annoying that the game is structured in such a way that you’re given a certain amount of freedom to explore the ship. You’d think that this would lead to some Metroid style exploration with new areas opening up as you collect more orbs. What actually happens is that you need to collect every orb anyway, so if you miss one you simply end up having to backtrack through areas you thought you’d already completed. I appreciate that this is an attempt to make the game less linear but it doesn’t work too well. 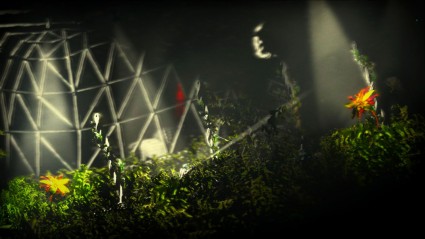 It’s a very minor complaint in the end and when you consider what The Swapper does well in nearly every other area, it’s easy to forgive this shortcoming.

One major strength, to my surprise, is that there’s a well executed and appropriate story throughout. The Swapper touches upon themes of ‘what is the human soul?’ and what is it that makes us ‘us‘? It’s a great idea to have these themes present in a game where you’re constantly making copies of yourself and where you see ‘yourself’ die over and over again. A rare cases of where narrative and gameplay synergises so well.

I appreciate that some people reading this probably don’t want a puzzle game full of ‘themes’ so I’ll put your minds at ease by saying that none of the story breaks the flow, and nearly every part of the tale is told by moments you ‘opt-in’ to. Reading computer terminals, standing next to sentient rocks and so on.

One final note on The Swapper is that it’s not exactly a long game. Depending on how badly you get stuck on any puzzles, you’re looking at around five to six hours of gameplay with next to no replay value. That being said, it’s a five to six hours you’re very likely to enjoy, if not love.

The Swapper has both style and substance. It’s a game that’s visually impressive and mechanically rewarding. The Swapper should appeal to anyone that’s looking for something more cerebral, both in terms of challenge and its themes. Brilliant.