Is it weird that I love stealth games but haven’t played anything in the Thief series before? You’re right, it probably is a bit weird, but hey-ho, you can’t have played everything, right? Well, my time has finally come, as Eidos Montreal and Square Enix saw fit to breathe new life into this long dormant prowler, rebooting the adventures of master thief Garrett for a new generation.

In what’s only ever referred to as ‘The City’, a gloomy metropolis ravaged by plagues and class wars, you play as legendary thief Garrett as he looks to make a living from the social disarray. After accepting a routine job to steal a precious stone from a nearby mansion, he discovers that he’s not the only thief on the job, as a former colleague of his called Erin tags along. She goes about her business with profuse arrogance, taking needless risks, showing off and mocking Garrett’s ability at every turn. It’s a combination of that self-importance and Garrett’s prior judgemental nature that costs her, though, as during the raid she plummets bang into the middle of a mysterious ritual that will change both thieves’ lives forever. Garrett tries his best to save her, but in doing so he gets caught in the ritual’s magical blast and loses consciousness.

Strangely, he wakes up an entire year later, victim to that classic video-game chestnut, amnesia. His sleep has left him feeling stronger and more agile, and he finds himself imbued with some nifty supernatural abilities that are especially handy in his line of work. With no sign of Erin, he rushes to Basso, his connected but shady employer, to get back to what he’s best at. 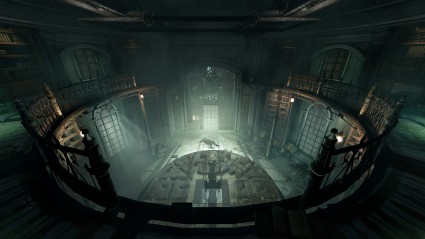 Despite some decent performances from a clearly talented group of voice actors, Thief’s story is surprisingly unremarkable thanks to some shonky writing and lopsided pacing. Gloomy, badly lip-synced cut-scenes move you through the charmless plot, while elsewhere Garrett’s constant and trite self-narration adds very little to the narrative experience. In spite of a rare and rousing action-packed sequence, I started doing something that I never do: I starting skipping cut-scenes because, simply, they were just not worth my time.

Mechanically, however, Thief does hold some merit. The fluidity of the controls are a huge part of this; skulking around city streets using the safety of the shadows, agilely hopping from roof to roof and swiftly clambering up above guards’ heads is undeniably satisfying. Garrett’s swoop manoeuvre is the most pleasing innovation, allowing you to perform a long-distance, low-level dash that’s extremely helpful in getting you to cover silently and invisibly, or getting the drop on an enemy to perform a stealthy takedown.

With this, age-old genre staples can be as tense and as enjoyable as I’ve played. There’s a certain joy in closely monitoring the environment, looking for weaknesses in enemy movements ahead and then trying to execute a plan without a hitch. Will you go for total stealth or will you try to isolate and remove guards from the equation one-by-one? It’s certainly worthwhile experimenting with your approach, in spite of occasional linearity in certain areas. In more open environments, no one route is particularly easy, with silence-shattering puddles and broken glass found lying in your path, vases or other breakables all too easy to knock over as you dash by, and enemy-alerting animals that will cause every nearby enemy sword to be pointed in your direction.

Despite getting these basics right, Thief unfortunately manages to trip over itself at many a turn, and the A.I. is one of the main offenders.

NPCs and sentries getting stuck on scenery and endlessly walking headlong into waist-high fences is a common sight, the poor buggers usually stuck until you see fit to put them out of their misery. When you gain the unwanted attention of several guards, they’ll block each other off or get stuck on each other in ugly fashion, and many times their incompetence has made my swift escape swifter than it probably should have been. Hide in an empty cupboard during an escape into an otherwise dead end room, and guards will stand at the door almost motionless, turning only to look in the most irrelevant of directions. Unless they actually see you enter the cupboard, you’re never in danger of being uncovered and thus there’s no tension to be found in this game of cat and mouse. If you’re outdoors when you’re discovered and you climb onto a roof, guards will never attempt to follow, instead standing together as an angry mob yelling at you from below.

For me, as a direct result of this, avoiding confrontation became less about doing so because great game design naturally lead me that way, but only because any other approach tends to make Thief look terrible.

The focus power that Garrett obtains during the prologue has many uses throughout. Initially it will only highlight every interactive element in the environment, but by finding hidden ‘shards’ you’re able to upgrade the power to yield other bonuses. Here you can invest points into such skills as slowing down time during lock-picking, widening the distance from which you can ‘see’ footsteps, or being able to knock out an alerted guard in one hit, among many others. While useful, these abilities do probably make Thief a little easier than it needs to be, and there’s an easy trap in lazily relying on them rather than using your grey matter. All of these things are handily changeable in the settings, though, if you fancy more of a challenge.

You also have a number of non-supernatural tools to help you get around the game world undetected, either obtainable through general gameplay or through one of The City’s merchants. Arrow types are the most prominent form of gadgetry; water arrows, for example, let you extinguish fires and torches  from a distance to create more darkness in which to hide from patrolling eyes. The other arrows, such as explosive or fire types are useful when your back is against the wall, but otherwise they go against Thief’s stealthy ethos, although useful for distractions. Other useful tools include a wrench to open locked grates and a wire cutter to disable the world’s many booby traps, both of which I’d advise you to source from the earliest possible opportunity or you’ll find your available navigation options restricted somewhat.

How do you pay for all these items and other upgrades for your weapons? You steal – this is Thief, after all. Gold cups, paintings, trinkets and rings; you can pilfer it all. Everywhere you go there will be loot for you to grab, which gets transformed into coin for Garrett to spend. There’s plenty to find, not only off the beaten path during missions, but Basso can provide you with side-missions to steal from houses around The City’s open hub-world. Unfortunately, while this process sounds exciting, the reality gets old real fast in spite of the occasional rudimentary puzzle. Likewise, it wasn’t long before the act of looting in general gameplay became a bit of a grind, as I found myself entering rooms and mashing the steal button until I’d stolen all some poor sod’s fancy cutlery. 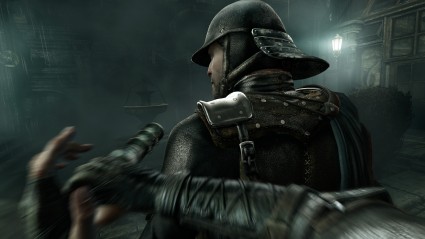 What makes these side-missions even worse, is that navigating and exploring the hub-world of The City is, on the whole, absolutely fucking excruciating. Whether it was the map providing very little help when below or above street level, or the incessant and lengthy loading times between areas, I found getting from one side of The City to the other a chore, when it should have been one of Thief’s most enjoyable elements.

One thing I will say for Thief – having played it on PS4 – is that it does at least have an incredible atmosphere thanks to its fantastic amalgam of Gothic and Steampunk themes. It’s dark and smoky, but also quaint as warm lights from fires and civilian windows break up the dark blues and blacks of the seemingly endless night. It’s such a lovely world to be in, even if the means for getting around are less than perfect. The architecture of the campaign locations is very impressive in both size and design, with large and intimidating structures that can, in one case especially, be absolutely terrifying. I’ll say no more on that.

All that glimmers is not gold…
In the first hour after I first booted up Thief, I thought I’d be writing a very different review. After all, it seemed to have all the hallmarks of a AAA game; great visuals, slick controls and a solid atmosphere, but the further I got the more cracks I started to see. Abundant A.I. problems are easily the most damaging to the experience, but I also found the horribly laid-out hub world to be a frustrating endeavour, whilst side-quest repetition and apathy-inducing story do it no favours either.

It’s not a terrible game by a long stretch, and in fact there are moments – usually in its main story missions – where it hits an enjoyable stride and really impresses, but any immersion is all too easily broken for it to be considered a must-play.