Who you gonna call? Well, if you live in New York City, it’s a safe bet you know exactly who to call, but what if you’re in Tokyo? Who do you call then? The answer is ‘Gatekeepers’, a team of anime stereotypes who love bustin’ ghosts, and are the stars of Tokyo Twilight Ghost Hunters.

Tokyo Twilight Ghost Hunters is a weird blend of RPG, turn-based strategy and visual novel. It’s a fairly brave mix, but then so is Bailey’s, gin and lager. Sadly, the resulting game is just as appealing as said cocktail, though like with most things in life, I’m sure there are some that will enjoy it.

Tokyo Twilight Ghost Hunters is full of anime tropes and relies on ideas, themes and character arcs you’ve seen a million time before if you’ve ever watched any animation that’s come out of Japan. Here’s a quick checklist:

So the visual novel element of Tokyo Twilight Ghost Hunters fell flat for me. It was too obvious and trite and whilst the episodic structure of the game worked well in terms of pacing the game, most of the episodes reminded me of things I’d seen done before, and done better. I also found it hard to care about the characters, being nothing more than cookie-cutter templates of people you’ve seen before. A lack of voice acting only compounds these issues further. 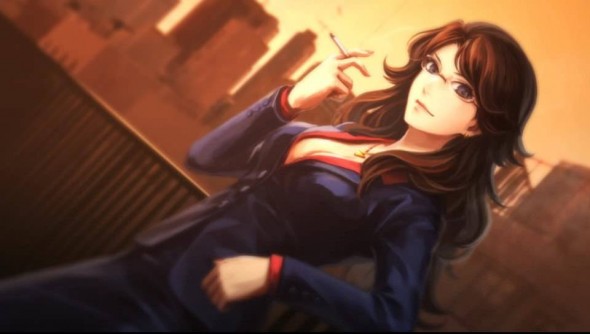 There are moments within the visual novel sequences where you have some input into how your character responds or reacts to events and other characters. Your actions are based around a confusing decision wheel, where you pick a verb and an adjective. After playing through the game to its end once, I still don’t understand how this works.

The verbs you pick from are represented by icons such as a hand, an eye, a mouth, and an ear. The adjectives are a heart, a question mark and so on. The problem is, it’s really hard to figure out what your combination of choices will actually end up doing. A hand and a love heart: is that a hug, or are you going to grab a boob? An eye and a question mark: does that mean you look around the room trying to find something or do you raise a quizzical eyebrow? I still have no idea and it seems like your choices make little impact anyway.

So a large part of the game revolves around reading tiring dialogue, making inconsequential and poorly signposted ‘choices’ and seeing obvious ghost stories play out. Though maybe playing the rest of the game will be better? 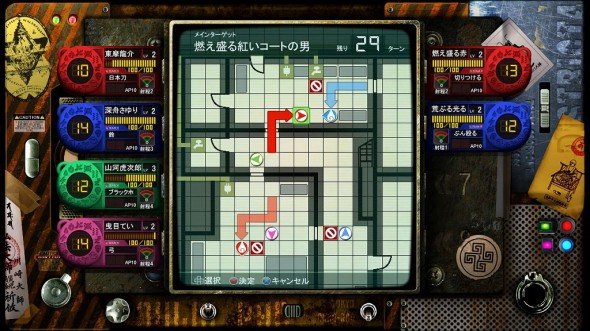 It plays as well as it looks.

You’d think that hunting ghosts and demons would lend itself well to some exciting gameplay. Well, you can stop thinking that. Tokyo Twilight Ghost Hunters implements a turn-based combat system that is poorly presented with graph paper populated by basic icons that represent your characters. This view does change when attacks happen, but they only give way to extremely basic glimpses of poor 3D environments, largely obscured by darkness.

However, the real problem with the combat is not the presentation. The biggest issue is that your turn and the enemies turn take place at the same time. Let me talk you through a normal battle to make this clear.

You start off looking at a map, a good start for some strategy to be had. You can see where the ghosts are likely to start, and can place all manner of traps and blocks to help funnel the ghosts to where you want them. These traps are quite interesting, as some will move a ghost when they come into contact with them so that you can create something of a poltergeist conveyor belt. So far, so good.

You then move your characters. Each character has a limited number of Action Points (AP) to spend each turn and turning, moving and attacking all take up your precious AP points. Choose your actions wisely, as you’re not sure of where your enemies are thanks to a fog of war that envelopes the board. So far, still good.

Once you’ve made all of your moves, the game actually ends the turn and your moves happen in front of you, your icons shuffling around the board. At the same time, the enemy icons get shoved around too. This is where problems rears their ugly heads. 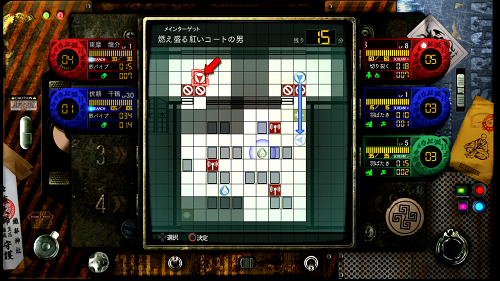 You could play this, or just roll some dice. Both are as skillful.

Because you don’t know where the enemy will move, even if you’re using ‘luring charms’, it’s impossible to have any actual strategy in this ‘strategy’ element of the game. All of your plans go out the window as soon as the actions start happening, and every turn you’re left hoping that the ghost wanders into your line of fire. It’s also unbalanced in the way that if a ghost wanders into your characters, they deal you damage, but not vice-versa. So every battle turns into a bizarre guessing game that’s poorly presented and really no fun at all.

The last piece of this puzzle is the RPG mechanics. After each battle you’ve been lucky enough to win, you can spend points on your characters, money on items and weapons and generally ‘level up’ a whole host of things. This is, again, no fun at all. All of these levelling up mechanics are found by diving into menus that are badly laid out and annoying to navigate. Considering the game boils down to hitting ghosts, there’s a large number of statistics and attributes to keep track of and it’s all too unwieldy for its own good. Because the combat is so poor, there’s no real incentive to spend much time thinking about how you’re going to spend your points or cash. 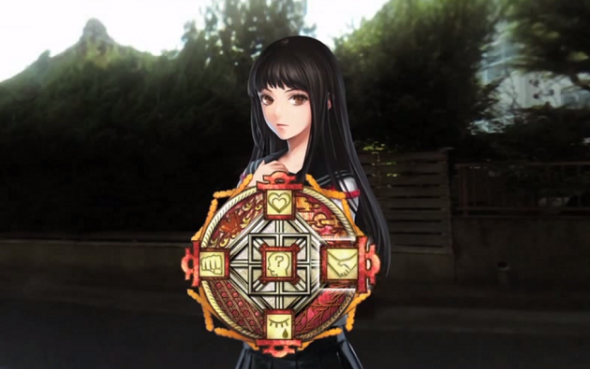 It’s a real shame that this game that plays so poorly and has so little in original narrative is full of amazing artwork. Each ghost and character is well-realised and looks like they have a much more interesting story, characterisation and importance than they actually end up having. In fact, aside from the clunky UI menus, the game’s presentation can’t be faulted and is easily the game’s greatest strength.

What’s unfortunate about Tokyo Twilight Ghost Hunters is that added into the mix is a sincere attempt at presenting itself as an anime series (complete with opening and ending credits for each episode). It only makes you wonder what could have been if only it were fun to play, or interesting to read.

This all being said, I don’t recommend the game but could see how people who are really ‘into’ anime could forgive the tired story and perhaps jump the hurdles of its many awful battles. I couldn’t though – so I suggest you avoid.