Many games try and stand out from the crowd by being bigger and louder. In a day and age where a game’s resolution, polygon count and licensed soundtrack are scrutinised to death, it’s refreshing to see some games shy away from this ‘more is more’ mentality.

Valiant Hearts: The Great War does things differently. It can be best described as a 2D action-puzzle game, but that doesn’t quite do it justice. With a few ‘boss’ battles littered throughout and stunning visuals, Valiant Hearts is a game that contains plenty of touching moments, some simple puzzles and a couple of ropey set-pieces.

Valiant Hearts has plenty of strong points. Most notable is the game’s visuals. Using Ubisoft’s UbiArt Framework as its engine, it has a gorgeous animated film quality to it. Character and world design goes someway to creating something visually striking and, in its kinder moments, quite appealing to look at. Think along the lines of The Triplets of Belleville’s exaggerated character design and you’re someway there. Barrel-chested men, doe-eyed little girls and pantomime-villain-esque barons make up quite an interesting cast of characters. 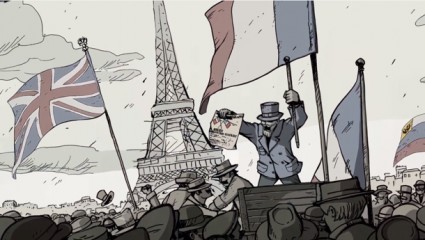 Everything looks stunning. Except for the bits that aren’t meant to.

The locations you’ll be travelling through make use of colour extremely well. As mentioned, some of the locales look appealing at first. Paris, for example, is colourful and vibrant for a time and the French countryside glows with a golden hue.

Soon the colour fades out of these scenes as the violence starts. Often, for added effect, the palette will be used to convey what a dire situation you’re in. An orange tint to everything makes it more than clear you’re being blitzed. Everything then fades almost entirely to black, Limbo style, as you attempt to make an escape from a POW camp in the middle of the night. You’ll also see the world turn a muddy-green as mustard gas fills the screen.

This talk of mustard gas, POW camps and blitzes should make it clear that Valiant Hearts is set during a war. For once though, it’s not World War II, but instead World War I. The story focuses on four main characters who make up a diverse little group. Their tales are intertwining and see them searching for loved ones and trying to stop evil barons.

I was told the game was heart wrenching, and whilst it does have moments, I ultimately found it hard to really care for the characters themselves or become too invested in their searches for their families. This was down to a number of factors. The first being that the game moves at quite a pace. Certain story moments are glossed over during the game’s comic book style animated cutscenes and plot points are reduced to reading a letter of a still frame of someone yelling “Noooooo!”. 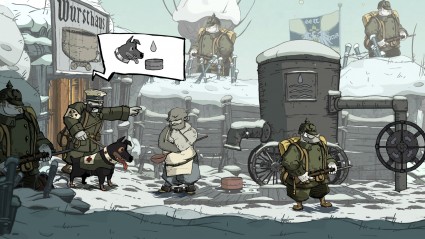 Characters don’t speak and instead rely on speech bubbles.

The characters, as charming as they look, also speak a gibberish language. Little snippets can be made out but they ultimately talk nonsense and any emotions and meaning to be made out of the character’s conversations is to be taken from speech bubbles that contain simple graphical symbols. For example, a love heart and some jumping up and down is meant to let you know that the characters care for each other. This sadly led to me not really caring at all.

The game itself, the part you actually play, is also slightly uneven. For the most part you’ll be solving simple puzzles, rotating wheels and pulling levers. None are too complicated, though should you ever get stuck there are hints available.

Though these puzzles never veer too far from simplicity, there are a few sections that do things differently, instead relying on physics. Occasionally you’ll need to throw an item at just the right angle so that it bounces into a target. One involved a swinging rope with a hook on the end that you had to hit at just the right time to give it enough velocity. 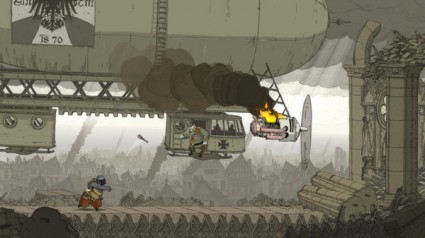 ‘Bosses’ are often enemies in tanks or Zeppelins.

These stick out like a sore thumb as the game doesn’t seem to be set-up with these puzzles in mind and certain bounces and swings aren’t as accurate as you’d expect.

On top of this, there are some action set-pieces, involving tanks and cars that are pretty fantastic. There are one or two sections where some trial and error came into play and one battle with a tank didn’t do a good job of letting me know I was actually causing any damage, but overall these sections work well and break up the reliance on puzzles.

The use of classical music in these moments, such as Flight of the Bumblebee and Infernal Gallop, is sublime and isn’t restricted to just these sequences. The audio throughout is top notch and helps set the scene incredibly well.

One final point to make, and it’s a bit of a strange one, is that the game is very smart in its delivery of information. I’m not talking about information on how to solve puzzles or what to do next, I mean information in the educational sense. It comes very close to being an ‘edu-tainment’ title.

Each chapter of Valiant Hearts seems to cover important aspects of this moment in history. Collectables give information on how people survived through these tough times and each new area has a diary entry associated with it. You don’t have to read any of these entries or grab any of these collectibles, but it’s well worth it as the historical photographs used emphasise just what it was that people went through and the text is well written and interesting too. Granted, that doesn’t sound like much, but I wouldn’t’ be surprised if Valiant Hearts makes you greater appreciate what is a relatively ignored (in games at least) moment in history. 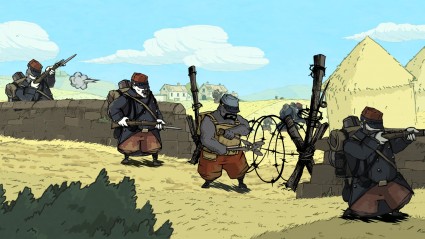 It’s not too difficult, but it’s still pretty great.

To surmise, Valiant Hearts isn’t outstanding to play. A lot of its puzzles are too simple or rely on slightly wonky physics to complete. The story has touching moments, but compared to something like The Walking Dead, doesn’t make me care enough about its characters.

With that said, I’d urge anyone to give this game a shot. It’s unlike anything else available. Valiant Hearts is a game that takes advantage of its setting and commits to it fully with stunning visuals and a great soundtrack. It’s a game that’s truly unique and full of merit.