Gamers nowadays don’t like being punished for their stupidity. We have become used to having our hands held with frequent checkpoints and autosaves aplenty. We can stand up to a few games wanting to tear us apart, such as Dark Souls, but we are a little bit too quick to say “this game’s too hard”, and call for a toning down. Wargame: European Escalation, the latest from Eugen who made 2010’s RUSE, is such a terrifying game. It’s happy to dish out the punishment when you fail to control your forces perfectly, and gives you little opportunity to put right mistakes; and you know what? I really enjoy it.

Wargame is set in the most dangerous days of the Cold War, the ‘70’s and ‘80’s, when the briefest confrontation within Europe may have led to all-out war between the two superpowers and their allies. It looks at four different hotspots, ranging from a Polish rebellion in the ‘70’s causing a collapse that NATO takes advantage of; to an example during the 1980’s, when the USSR runs through the Fulda Gap in order to direct attention away from the economic trouble they are in. 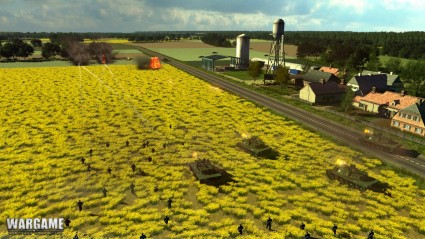 Another beautiful town, another warzone.

Each scenario plays out in a separate operation, which progresses through about five missions each. These mission have a great deal of variety and as they play out, news tickers and mission briefings constantly tell you what is going on elsewhere in the campaign. The story feels well-written, as if it was a good piece of alternative history. It doesn’t get anywhere near the heights of World in Conflict’s bonkers storyline, but acts as a good backdrop to all your wargaming.

Wargaming has never been so fun!
The meat of Wargame is all based around the battlefields of northern Europe. These huge expanses of terrain are filled with villages, woods and small hills, providing plenty of opportunities for cover, chokepoints and deathtraps.

The key thing to remember is that Wargame is a realistic game. No matter what units you buy, you have to make sure that you keep them supplied and repaired via FOBs or supply vehicles. You should also be gathering plenty of intel on your opponents. Line of sight plays an important role; especially when enemy units dig into the woods and towns.

As you play you earn command stars, either via levelling up in multiplayer or by achieving objectives during the campaign. These command stars are used to unlock more units for both modes. I personally really like this; it makes you seriously think which units you want while also giving you the choice, rather than just unlocking units that are pointless while saving the best to last. The star values are also very well thought out. The Apache gunship and the Challenger 1 main battle tank (both arriving towards the end of the time period) are around 6 to 8 stars each, which is more than what most levels give you as a reward. These massive point sinks cost tons of points and command stars, but are well worth it if used effectively. 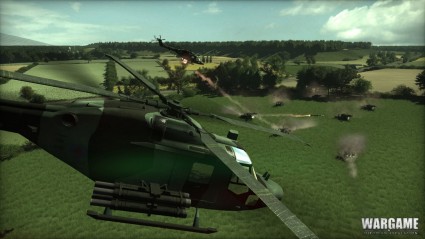 Helicopters are king... apart from AA.

In fact, that is really the moral of the game in general. Units are designed for a specific role, so can’t be used via an attack move to roam around the map killing everything with ease. The Apache can wreck any ground unit, but without recon support, long-range SAM systems will down it before they are even spotted. Infantry can hold out for a very long time if dug into the woods, able to take out main battle tanks as long as they stay hidden.

Once you’ve unlocked a unit, you must then add it to a deck. You can choose units from any of the four nations associated with the two sides, so NATO commanders can call upon West German AA units, British tanks, French infantry and American helicopters all in the same force. This allows you to patch over the holes in a nation’s forces, such as weak tanks or a lack of mobile AA, giving you the chance to prevent a much more balanced force.

I have some issues with the game, though. The single-player does rely a little too much on spawning units behind you in order to keep you on your toes, which can be complete rubbish when you’ve managed to clear out the entire map and suddenly a tank force pops out of nowhere. The single-player operations also keep unit counts between missions, which is a pretty cool feature unless you mess up horribly in the first mission of a set. This factors into a huge difficulty spike at the end of the Russian operation, which severely limits you in your unit choices, before throwing you into a mission filled with the most enemy units you’ve seen. In addition,  some tactics make certain units next to pointless.

The rocket’s red glare
Graphically, Wargame doesn’t quite blow the boat out of the water on first impression. It looks rather tame and overly clean, not at all suiting the realistic war theme. However, Eugen are using an improved version of the IrisZoom engine (last used in RUSE) which does some quite incredible stuff. The maps are huge; several kilometres square and packed full of trees, hedges, buildings and other scene setters. In addition to this, the game also renders hundreds of tanks, helicopters and infantry in a single mission, providing some truly huge battles. The units also look great up close when you zoom all the way in. Overall, the battles look fantastic.

The mission briefings and menus are also pretty good. There is a nice combination of stock footage from the period and maps covered in arrows. The UI is a little blocky, and I’d have much preferred it if you could minimise the UI to watch the mayhem going on in front of you. Nonetheless, the game looks better than most overall.

The very distant rumble of artillery
Wargame is very muted in terms of sound. Nothing really stands out, which kind of suits the game’s perspective; you’re viewing from a command point on high and so everything should be a little muted. The music is pretty forgettable and just serves to sit in the background; it doesn’t react very much to what is going on in the game.

Effects are pretty good, with some punchy explosions helping to set the mood. I do quite like some of the voice acting, as troops speak their national language which gives a nice touch of authenticity. The British and American dialog is okay to listen to, but the SAS units in particular have some classic lines as they run around the map hiding in cover.

Run around with your very own NATO
It is very obvious that from the start that Wargame is primarily a multiplayer game. This is especially apparent when you look at the command stars, as the vast majority are unlocked via multiplayer online. There is a well-rounded feature set for the online mode, with up to 4v4 players and two different styles of gameplay; most points after a certain time or first team to a certain point score.

Server hosts have a huge number of controls over the various settings for a match, and there is a nifty feature allowing uneven team games to still be competitive by splitting the overall team deployment points among everyone. On the whole, most games were lag-free and fun to play. It is lacking AI for multi-player games, but the developers have said it should be available soon. 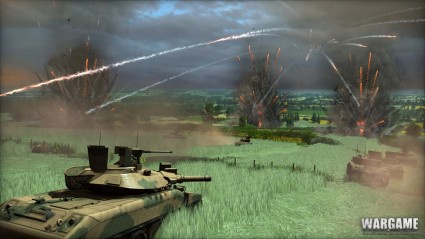 There are some issues, though. The ranked multiplayer scene is pretty quiet so it can be next to impossible to find an automatch opponent; you can pretty much ignore that button. The greater issue is one of learning, as there is no multiplayer tutorial and the game isn’t very forthcoming with hints and tips about picking units during deployment, or other aspects of gameplay. This was a problem in the beta as well, and led to much of the first week’s games being filled with player wondering what to do. This inexperience also allows players to use spamming style tactics to great effect. The biggest problem with Wargame’s multiplayer is that people are idiots.

Are you ready to escalate?
Overall, Wargame: European Escalation is a great game packed with depth. If you are willing to put your time into it and be patient with learning your way around its various oddities, it is a great little RTS. The unit unlocking will take a long to do and the developers are very hands-on with post release support. I label this a must buy for any PC gamer wanting to venture back to the Cold War, and who isn’t above learning a few good tactics.