After an initial Kickstarter frenzy, it’s safe to say that the shine has been taken off the crowdfunding apple for some. Amongst numerous delays, games turning out unfinished or at a generally poor standard and, of course, a slew of outright cancellations, it would be fair to claim that the service has been a mixed success. Many developers have fallen foul of inexperience, over-ambition and sometimes unrealistic optimism involved with developing an entire game using a limited budget courtesy of numerous enthusiastic strangers.

Thankfully, however, Kickstarter has helped to bring some genuinely good games to fruition. I’m pleased to say that, on the whole, Wasteland 2 by InXile Entertainment is one of them.

Like many successful Kickstarter campaigns, the developers of Wasteland 2 had some experience under their belts which will have no doubt helped rally some nostalgic excitement from fans. Under the moniker of InXile Entertainment they haven’t produced too many classics, but some of the team were originally part of Interplay, responsible for developing Fallout and publishing Baldur’s Gate. That’s some formidable old-school RPG heritage right there. 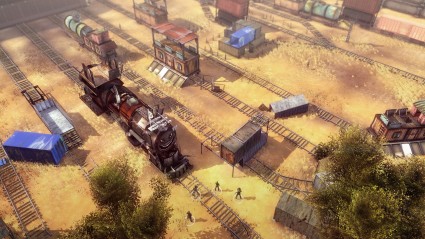 All aboard the crazy train!

It’s a heritage that is strongly evident in all aspects of Wasteland 2. Your first port of call is the character creation tool, a very powerful and deep system which will find you handcrafting the four characters of your party. A seriously daunting task this is, too. With very little hand-holding you’ll have to determine the best skills and abilities for each party member, without knowing what is actually useful or not. Some are essential; others are a little superfluous. You may be tempted to ensure that all characters are skilled in the better-sounding talents to some extent, but to have more than one invest points into a certain ability is often pointless. For the truly stumped, you do have the option to select four pre-made characters, but arguably these are far from optimal builds anyway.

Once you’ve agonised over your character choices, these four reluctant heroes are drafted in to join the Desert Rangers, a team of crusaders tasked with helping other survivors in a post-apocalyptic world. An experienced Ranger called Ace has been found brutally murdered, and General Vargas sends you away from the Ranger Citadel base to roam the Arizona Desert wastes, to find out how and why.

Though perhaps you shouldn’t leave straight away. Indicative of Wasteland 2 as a whole, this starting area has some important discoveries to make if you explore it fully. One of these is a shovel which lets you dig for items, but you’ll have to work this out for yourself. Even more crucial is Angela, Ace’s ex who’s moping around the base. Lend her a shoulder to cry on and she’ll agree to accompany your party on your first missions, and as a powerful character that’s several levels above you, she’s a massive benefit to the team. Neglect to talk to her, though, and you’ll completely miss this huge leg-up. Such is the nature of this game that if you miss something or screw up, too bad. 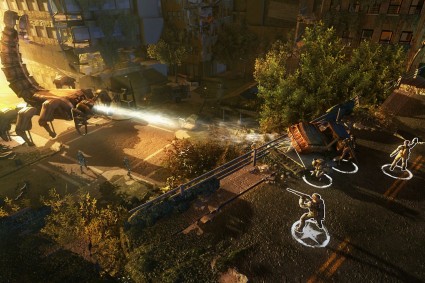 This mentality continues once you start to explore the wastes. Traversing the overworld is a basic affair consisting of a pointer that you can order to move across the map, although as your party travels they’ll come across hazards like nuclear radiation, and random encounters with enemies which range from trivial skirmishes to life-or-death situations. You’ll also need to keep your water reserves topped up else everyone will die of thirst. The lack of a real overworld may sound like a bit of a cop-out, but in practise it works well and carefully balances ambition with reality.

If the map is a little one-dimensional, then the intricate levels interspersed amongst it more than make up for this simplicity. Every area is littered with loot to scavenge; locks to pick and safes to hack; puzzles and hidden secrets to discover; multiple routes to take; NPCs to help, kill, bribe, avoid or strike deals with; side quests to complete and creatures to slay. Faced with an enemy stronghold blocking your way, you could pay a toll for safe passage, find an alternative route to sneak through or just go in all-guns-blazing.

The combat is a highlight of Wasteland 2, comprising of a turn-based system that revolves around Action Points. Each character has a set amount of AP available per turn, which can be used to fire their weapon, move around the battlefield, or use an item. With the juggling act of spending those points wisely coupled with tactical considerations like taking cover, reloading, preparing ambushes, calculating range for effective accuracy and avoiding friendly fire, the battle system is rich and complex. Due to the effects of chance and enemy unpredictability, you can fight through a battle, reload your save, and experience a completely different outcome the second time round. 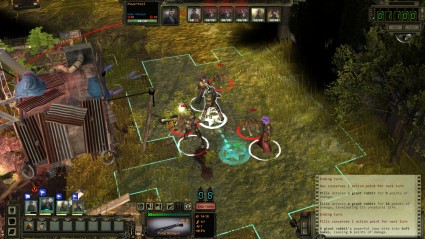 Like XCOM, just with less aliens and more nuclear radiation.

In fact, unless you are particularly skilled, lucky, or strict with yourself (or all of the above), you’re likely to become very well-acquainted with those quick-save and quick-load buttons throughout Wasteland 2. Sometimes it’s just plain cruel, springing surprises on you that’ll blow up your characters, or ambushing you with a pack of very strong enemies. Once a team member dies, unless you have another character with the necessary item and Surgeon skill and are able to revive them in time, those characters are lost forever in an already difficult game, in which you’ve spent hours levelling them up. I believe there is a temple which may allow you to resurrect fallen comrades if you’re able to get to it, but I honestly have always wimped out and just reloaded my save once a party member had died to spare myself the heartache.

On the flipside, it’s not just your characters that can die permanently. Major NPCs can be slain, whether by your choice, failure to save them or simply if you kill them by accident. Unlike many modern games that fade out to a blur while displaying a message that you’ve failed the mission before reloading your last checkpoint, Wasteland 2 shrugs and carries on. Maybe you’ll fail the quest, or miss out on future missions and potential rewards, but that’s something you’ll have to deal with. The game world and storyline is adjusted accordingly and you’re left to swear and kick yourself a bit then move on or, you know, tap that quick-load key. Be warned, however, that you’ll have some difficult decisions to make throughout the story and that you’ll never be able to save everyone.

Even gathering loot can be a punishing experience, as you frequently come across chests which are locked, safes with electronic security systems, and numerous caches fitted with explosive traps and alarms. Various character abilities are utilised to get safe access to those sweet goodies, but if those skills are not a high enough level you’ll run the risk of blowing yourself up or even blocking off access to the loot permanently. The fact that weapons, ammunition and supplies are so scarce in this wasteland makes this all the more nerve-wracking, and really helps to build tension, which turns to euphoria once you successfully gain access to a bountiful weapons cache.

Further building on the atmosphere of the desolate wastes is a decidedly grim aesthetic and moody sound design. The visuals of Wasteland 2 are far from a technical marvel with plenty of brown soupy textures, ropey character models and overused assets, but they still create a strong sense of place. The bleak audio boasts some dark ambience and anxiety-inducing music which is well-done, and I actually wish this was more prominent as things are sometimes a little too quiet. Voice acting is also surprisingly well-performed, even if it is limited to key conversations and radio communication – you will need to read your way through chunks of dialogue quite often. Not the end of the world unless you’re particularly averse to reading, as the narrative and character interactions are interesting more often that not.

Wasteland 2, on the basis of what it sets out to achieve, is a triumph. Successfully channelling the deep and unforgiving design of classic RPGs, it provides nostalgic gamers with a quality re-imagining of the types of games they enjoyed decades ago. Very few concessions have been made to a modern audience other than a moderate neatening up of the presentation, although it’s still a little archaic and rough around the edges in places.

Wasteland 2 is tough, immersive, complex and satisfying. Someone fond of the simplified systems and player-babysitting of newer games may find it a little unpalatable, but you can’t please everyone. If you’re very experienced in the genre or are not ashamed to read the occasional guide and make copious use of the quick-save and quick-load functions, you’ll be rewarded for your persistence.