Wolfenstein: The New Order is something of an enigma for me. It’s a game of contradictions; a modern-day first person shooter that embraces old school design philosophies; a thoughtful, sometimes touching alternate history war story that also manages to be a stylish, dumb action movie. It’s tonally all over the place like this, yet somehow it comes together, resulting in one of the year’s most pleasant surprises.

In this reimagining of the Wolfenstein lore, The New Order sees long-time hero B.J. Blazkowicz injured badly and left for dead during a routine assault on a Nazi fortress. He survives his wounds but at a cost, living the next fourteen years as a vegetable in a mental asylum. When his senses finally return, he finds himself in a 1960s timeline where the Nazis have actually won World War 2 and have taken over the entire world. With the help of friends old and new, he seeks to put together a rebellion.

While I fully anticipated a need to suspend logic – and let’s be clear; Wolfenstein doesn’t disappoint in regards to eccentric and outlandish ideas – I certainly wasn’t expecting to give a solitary crap about its characters. Against all odds, I did. You can see why anyone would land on the preconception; after all Blazkowicz is the archetypal white male protagonist, right down to his blue eyes and chiseled jaw, but there’s some truly great characterisation on display here. This is especially true of his rebellion family who, despite being caricatures themselves, all manage to feel incredibly human and relatable.

Is it always immaculately written? Honestly, no, but I felt surprisingly invested in their outcomes by the end.

As for the Nazis, The New Order makes no effort to disguise or humanise their horrific history, offering some interesting takes on where their unquestionable evil might have led them. Because of this, the handful of key figures that you’ll encounter can come across a little like Saturday morning cartoon villains with no shades of grey in their moral fibre. The sense of menace they exude is impressively crafted, however; they’re there for you to hate and, for me, in that regard they definitely succeed.

This Wolfenstein ditches the customary occult and supernatural theme of prior series entries and replaces it with a focus on crazy technology and sick, scientific experiments. This is a good choice; we avoid the tropes of Nazi zombies and are treated to more imaginative and varied mechanically-enhanced enemies. Be it grunts, armoured foes, A.I. mechs, giant robot dogs or humongous War of the Worlds-style tridents, there’s a varied assortment of engaging foes to battle against. 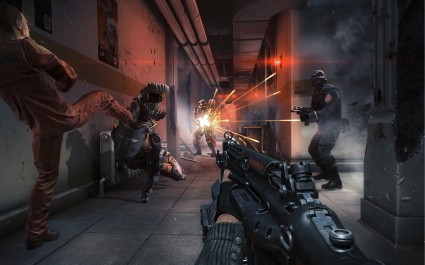 The setting also allows for futuristic takes on typical FPS weaponry with which to take all those nasties down, and each is further upgradeable by finding kits around the levels. Your standard assault rifle, for example, can later acquire a rocket launching attachment, while your shotgun can eventually fire rebounding shrapnel to do supplementary damage. The best part is that any gun can be dual-wielded, and when I say ‘any’, I mean any. Even sniper rifles if you’re that way inclined, you maverick renegade.

My favourite ‘gun’, though it might be considered more a gadget early on, is the laser cutter. This essential piece of gear permits you to cut through chain-link fences and other surfaces, not only allowing you passage through certain parts of a level, but also helps you to find health and ammo, plus secret passages leading to upgrades or collectables. In some cases I was even able to use it for a sneaky tactical advantage; cutting a tiny hole in a wall plate just big enough to shoot through, but small enough to leave myself safe from incoming fire.

Gameplay mechanics are wonderfully slick, resulting in a nice, fluid rhythm, while you get a satisfying sense of power and impact when laying fire down on a foe. Firefights are exhilarating, frantic affairs and whenever I ably dispatched a mini-army and found myself relatively unscathed, I couldn’t help but feel like a badass.

Impressive level design helps to keep combat feeling fresh too. Sure, each level takes you on a linear path through various environments, but regardless of whether you’re in a wide-open area or a corridor, you’ll find plenty of deviations to explore or to give you a tactical advantage. Each setting at least feels expansive even in their most narrow moments, and they’re always rich with an impressive attention to detail.

Stealth is also valid option in many sections. Going all-out and firing first is always fun, definitely, but it can lead to more way enemies appearing than if you were to sneak around and take them out one-by-one. This is especially true if there’s an officer in the region, who can keep calling in more reinforcements until you take them down. Coincidentally, without being perfect, I had more fun playing stealthily here than I did recently in Thief, a game entirely centred on that as its chief function. 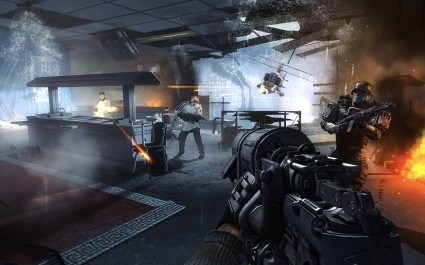 It’s an all you can defeat buffet…

There are many nods to Wolfenstein’s legacy to be found in the fundamental design, mixing new ideas with old and, amazingly, not a single one misfires. Scrambling for health-packs and armour because your health won’t fully regenerate might sound archaic in principle, but here it works exceedingly well, adding a level of challenge that’s only ever pleasing to overcome. Speaking of challenge, the difficulty selection screen is sure to raise a chuckle too.

While not exactly as flexible as systems found in the likes of Fallout or Borderlands, B.J. can earn perks in the categories of Stealth, Assault, Tactical and Demolition by fulfilling predetermined criteria in gameplay. I imagine that this is intended to encourage you to change up your style, but personally I tended to just go for the most effective strategy for each given situation and never felt a need to chase particular perks for an advantage. I was welcome of them when I unlocked them of course, such as the ability to silently kill someone by throwing a knife, but enough bonuses are unlocked by playing naturally that it was never a pressing concern.

Although my expectations for Wolfenstein: The New Order were pretty low going in, it easily surpassed them and then some. It’s an exceptionally fun, loud and action-packed shooter that, happily, shows unbridled pride in its old school heritage. While it’s true that the story can seem at odds with all the explosive mayhem and gratuitous brutality, a surprisingly excellent group of characters somehow makes it work.

The New Order has something to say, and although it occasionally gets lost amongst all the big dumb fun, it’s well worth listening to.