One thing I love about gaming is how an atmosphere can almost suck you right inside a game world. Creating an atmosphere that can do that is a hard task for any developer and takes real talent, especially when they are trying to grip you enough to make you feel like you are part of what you’re experiencing on the screen. This is where lighting effects and audio play a vital part, re-enforcing  everything that’s happening and making it feel all the more believable.

If you get that combination right, it’s possible to create tension to keep the player on edge throughout. This is something that’s found in a lot of survival horror games and, for the most part, works extremely well. It’s a simple trick really; taking two of your five senses and simply overloading them, but it doesn’t always go according to plan!

Creating the perfect ambiance is something that I think needs to be right in every single game. Picking the wrong sound at the wrong time, whether it’s a knock on a wall, a gunshot or a more subtle undertone, can spell an atmospheric disaster for the setting.

Some games do this very well, where without even using your eyes you can feel the atmosphere. Take the Dead Space series as an example; if you close your eyes and just listen to the audio track at any point, you can hear each bulkhead crack. You can hear things moving about, you can hear each step that Issac or someone (or something) else takes. If you listen carefully, you can even hear the whispering, like ghosts in the wind. It’s almost like you can reach out and be touched by some creepy necromorph hell-bent on ripping you to shreds.

This is what I would define as the right audio stimulation. When moving in the game world, the sound overstimulates your brain and makes you feel like something is going to jump out at you. You will also notice that there is no music at all; just pure ambiance with changes in pitch. The real chills and scary vibes are created from everything else. 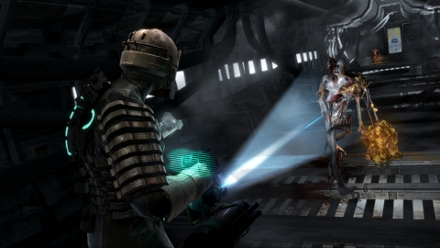 Just soaking in the atmospherAAAARGH!

Some games don’t create auditory responses very well. Take, for example, Deadly Premonition. Close your eyes in that game and just listen. You get nothing. The sound effects seem very wooden, and have pretty much been copied straight from an old Resident Evil game. The footsteps that seem to overlap when your character moves sound like horseshoes rather than real shoes and the rain pouring down that sounds like rice slowly dropped on a tin roof. When the enemies are around, they do the same slow noise that almost sounds childish. It also boasts a really bad music selection; one that really doesn’t suit its genre, although it at least tries some of the right things, such as increasing the tempo and adding music into the gameplay when you’re attacked to add a sense of urgency. The problem is that the feeling that the game is supposed to produce has already been lost by the mismatched, unstimulating audio.

Audio, though, is just one part of establishing the atmosphere. The brain, being the powerful yet complicated tool that it is, likes to take from more than the one sense; we have five, after all. Creating tension in a game is also about what you see with your eyes, not just about what you hear.

These days, we like to be roused by realistic and believable graphics. When you walk down a corridor, you want it to look like a corridor, but it’s the little attention to detail that we’ll notice more than anything else. Once again, in the horror genre, you expect the environment to be dark, dingy, confined and claustrophobic. Limiting light enables your brain to concentrate on what you can see, but wonder about what you can’t. This type of restriction works very well, especially when trying to make your audience jump, as it creates a tunnel vision with a myriad of possibilities lurking in the darkness. The use of dark colours instead of colourful environments helps trigger certain responses in the brain. Combined carefully with timed sound effects and the correct ambiance, it will bring the game to life and grip your imagination.

If you look at Dead Space once again, you can see the tunnel vision effect: Barely any light, carefully placed scenery with just small additions to the environment; like blood splatter, dead bodies and remnants of what seems a massacre rather than a battle. Not only that, there’s more re-enforcing detail in front of you, with Isaac’s suit in its almost steam punk design, nearly as terrifying as the enemies that you are facing. Every enemy is detailed, looking like a cross between an insect and a deformed human being. Carefully lurking behind each corner, or dropping from an air vent, almost instantly before your eyes. Just by seeing the images you can get a feel for the fear they are trying to inject, but you can only be really engrossed if you combine that with the audio. 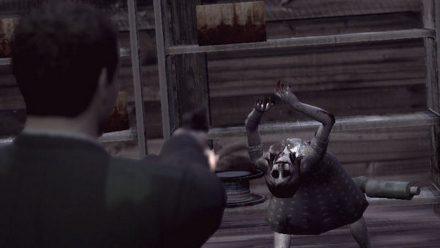 Simon apparently spends a lot of time playing games with his eyes closed.

Back in 2009, I was really looking forward to the latest instalment of Resident Evil, the game that pretty much wrote the rules on the horror game genre. What I found was that the game imagery had been drastically replaced with a brighter tone. The zombies replaced with deranged tribesmen, and most of the core favourites, like the Licker, barely present until later in the game. The entire feel of the game was far different from what you would have expected from a horror game. The audio was about the only thing that kept the game grounded in horror, but even then you had already lost that sense of urgency that Resident Evil 4 had before it.

Picking the right combination and setting is a must for any game, not just for the horror genre of course, however, horror is the easiest place to see when it goes wrong. So many times I have picked up a game and the audio doesn’t match the visual look or the game premise. It also works both ways; for example, with the various goings on in a game not matching the audio selection. Even some of the most popular titles don’t always get it right, relying on repeated music to oversell the tension you should be feeling, instead of using environment noises effectively, which is sometimes all that’s really needed. Even music can be too much for the image that the game is trying to promote and similarly, give it too little and it just won’t cut the mustard. It’s a fine balancing act.

The point I’m trying to make is that the slightest thing being off can instantly lose the immersion into a given game’s world or universe. You could have the most basic of stories in your game, but with a strong atmosphere, you can create something so gripping that people will still be playing your game three years later; look at Left 4 Dead, which has lost none of its appeal over the years.

I’m sure that if you look carefully you will see what I mean. It may even enhance your gaming experience to really pay attention to what the developers were trying to create, or, on the flip side of the coin, it may even make you pick fault with some of your favourites.

What games do you think were ruined by similar things?