inFamous: Second Son was the PlayStation 4 game we were all waiting for. The first proper foray into the capabilities of next-gen gaming. For those familiar with Sucker Punch’s previous PS3 titles, it would be the chance to see where the story of conduits would go post-Cole, but for those taking their first venture into the world, it would be a new opportunity to get behind some superpowers of their own.

There’s no doubting that inFamous: Second Son is a great game, with some spectacularly beautiful graphics and brilliant gameplay, but the experience was marred by the unlikeable main character, Delsin Rowe. Cocky, arrogant and immature, the Second Son protagonist epitomises the worst of all the qualities we’ve become accustomed to as comic books and superheroes continue to bombard popular culture.

With two playthroughs for the good karma and bad karma endings, it can feel like a long ride when the main character just feels like a complete jerk. So just where does it all go wrong for Delsin?

Right from the off, things for me and Delsin didn’t start well, as we see Delsin vandalising his own brother’s billboard. He’s the type of person who resorts to petty crime when bored. We’re supposed to care about the well-being of this idiot?

Delsin’s initial impression isn’t helped by the other characters in Second Son as we’re introduced to the two main influences in his life. First off, brother Reggie. Selfless, police officer Reggie, who ultimately sacrifices himself so that Delsin can carry on with his mission. Reggie’s worst feature is that he’s scared of what’s happening to his brother and comes off a bit prejudice as a result, but he carries alongside Delsin nonetheless, doing his best to help. Delsin lies to Reggie, going out of his way to do the opposite of what Reggie asks him to do, and displays a real aversion to authority; Reggie is Delsin’s older brother and a police officer, he should be able to hold some influence over Delsin, but he’s just a law unto himself and doesn’t respect Reggie’s authority in any way. 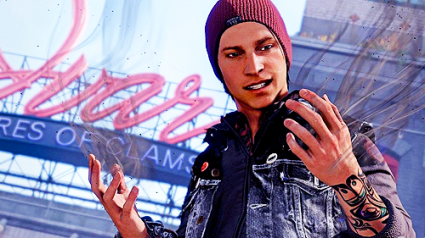 Just one of those faces you want to smack

Then we’ve got Betty, leader of the Akomish tribe. Without really knowing a lot about Betty, you can tell that Delsin respects her at least. It’s her he turns to for sanctuary in the opening moments and she covers for him. You can tell this is a regular occurrence, and that really got my back up. This caring woman, who is clearly in her twilight years and who, as the tribe leader, probably has better things to do, is having to cover for a grown man after he commits petty crime. Rather than seeing Betty as a mother figure to Delsin, I see this more as Delsin abusing Betty’s good nature and trust. He just gets better and better.

The rest of the Akomish tribe, who you can fully believe have long suffered Delsin’s behaviour over the years receive the brunt of the consequences of his actions this time around. Yes, I do think that Delsin has brought everything upon his tribe. Augustine was after him, because he pursued Hank. If Delsin had proceeded with a bit more caution, then things might have been different for his tribe (though then, there wouldn’t have been a plot). The whole plot dangles from a thread that Delsin has pulled at, and it is his selfish nature that has brought Augustine’s wrath upon the Akomish.

As Second Son progresses Delsin’s attitude remains the same and appears to be in stark juxtaposition to the increasing severity of the plot. Lives are at stake, the city is being taken over by DUP forces, but Delsin still acts the immature child, making crank phone calls to DUP operators and lying to his brother.

Delsin rescues Fetch and Eugene from their paths, leading them down his own with him. Depending on which karma option you choose here, Delsin influences them in different ways, but the same fact remains; Delsin doesn’t do what’s best for the individual, he manipulates them to his own cause. At first it may seem that by sparing his new comrades from Reggie, and the law, Delsin is doing them a favour, but he’s only doing himself a favour by recruiting new powers for himself, and new minions. He’s also putting Reggie in a difficult position by making him party to the crimes Fetch and Eugene are committing, then denying him their arrests. For all of Reggie’s well-meaning speeches, Delsin always seems able to talk him round and coax him into doing things his way, without taking Reggie’s professional circumstance into consideration.

Delsin’s character traits seem better fixed for the bad karma playthrough, where his immaturity and arrogance seem to go hand in hand with the havoc he is causing. Trying to “do the right thing” seems much harder when you don’t care about the moral implications as the character you’re playing as. The only reason that I had Delsin act “good” was for the trophies, not because I saw him as a morally just individual who deserved to go about his business. Delsin’s moral compass was already way off before I began interfering in his life. 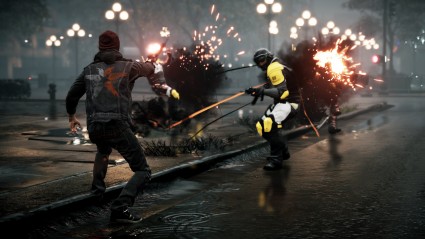 Someone dishes the beating we all wish we could give…

Games like the GTA series can afford to have unlikeable characters; crime isn’t exactly the most likeable of exploits, and the plots tend to be centred around self-preservation and self interest. inFamous: Second Son, on the other hand, has its focus set on a wider scale, and Delsin can’t afford the luxury of joking around and acting the fool, but he does it anyway. Whilst his cocky one-liners and asides are somewhat humourous and endearing to begin with, after a while they start to feel like that person in the office who won’t stop making terrible jokes after you accidentally laughed at one once.

Ultimately, Second Son is about saving the rest of Delsin’s tribe. We’re used to the arrogance and cockiness of characters like Spider-Man and Iron Man, but we can believe they’re working for the good of their cities, and even the world. Despite Delsin’s protestations that he’s trying to save his tribe, a lot of the time it feels like he’s just in it for himself, trying to absorb as many different powers as he can and trying to further his own influence.

After some criticisms that inFamous 2‘s Cole had little-to-no personality and was a bit bland, it seems like Delsin is struggling with the opposite problem. There’s just so much going on with his personality, it leads to there being a lot to not like about him. Everything bad that happens in Second Son leads back to his actions, and not through simple misdeeds but from big actions. Delsin jumps in too quickly and doesn’t take enough time to think about the consequences. Arguably if he did a bit more thinking, then there wouldn’t be a game, but it’s hard to like someone who seems to have too many bad qualities to be really realistic. When as much effort goes into making a game look as realistic as possible, you’d expect the characterisation to be just as real, superpowers aside.

inFamous: Second Son would really benefit from dialling Delsin’s personality back a few notches. It’s all very well and good having someone with such a big character serving as the protagonist, but if it turns people off playing through then it risks just being an advert for the capabilities of the PS4. Second Son is visually spectacular, and has some enthralling sequences, but wanting to put your fist through the television every three minutes or play on mute isn’t ideal and it isn’t likely to bring series newbies back. Here’s hoping for some serious character development in the next game.