Nintendo have had a difficult financial year. They reported a loss after the release and subsequent drop in price of the 3DS; all this while still developing the Wii-U. However, the 3DS managed to turn itself around a little after the price drop and is now selling fairly well, with many cool titles awaiting release in the future. The main complaint, of course, is the omission of a second circle pad on the device.

This was such a big problem that a piece of hardware (Circle-pad pro) was produced. It was even sold in bundles with the newest Resident Evil game because it was touted as a ‘better experience’.

So, you have to ask yourself, “When Nintendo get around to doing a hardware revision to the 3DS, what will they change about it?” 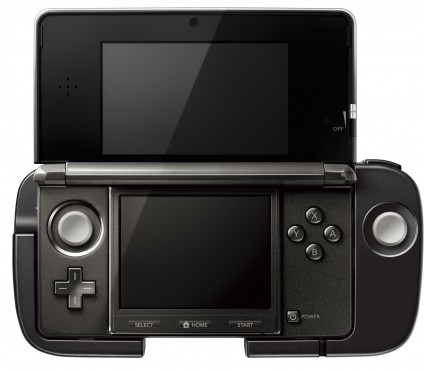 If this is the size of the 3DS with circle pad pro....

It seems obvious to add another circle pad to the device. However, Nintendo announced at the tail end of last week that they had other ideas, and revealed to the world the latest in the line of the 3DS consoles, the 3DS XL (or 3DS LL inJapan).

I’m not sure if everyone will agree, but this is pretty far away from what I was asking for in terms of new 3DS hardware. The very need for such a piece of kit as the circle pad pro surely makes it obvious where the device is lacking.

Interestingly enough, the old circle pad pro is now incompatible with the new device. But, don’t despair, because andriasang have reported that there will be a 3DS XL compatible version of the peripheral. This information is reported to have come from a Q&A featured in Famitsu.

To me, the need for another version of the circle pad pro highlights an already poor choice in hardware revision. That being said, I suppose it could have been much worse without. Still, has anyone considered the kind of size this thing is going to be!? Surely it will be larger than Game Gear proportions; and for those of you who remember, the Game Gear was one chunky handheld. The 3DSXL is already measuring in at 13.4 x 7.4 x 2.1cm, and if you add another circle pad you are looking at a handheld device about 17cm wide….

Bigger is better, or so it seems.