Will you be buying the world’s most expensive video game?

Did you like Race Driver: GRID? Are you a fan of special editions? Are you filthy rich? Well then, you better move quick to secure Grid 2: Mono Edition because there’s only one in existence…and it costs £125,000.

Codemasters have announced that the ultra limited edition package for the high cost racer will include an actual racing helmet, driver’s suit, bespoke racing gloves and boots. Plus a PS3. Oh, and some game called Grid 2 as well, but wait, there’s more!

The lucky owner will also receive a factory tour of the super-car manufacturer BAC. Why BAC? Because a 2011 BAC Mono super-car is included in the deal. Let’s take a moment to let that sink in.

Yep, a 100% real and road-legal racing car is genuinely included in this special edition. As if it were something as measly as a piddly happy meal toy.

The Briggs Automotive Company built racer will be customised for the drivers height and weight. The ultra lightweight carbon fibre car reaches a top speed of 170 mph (274 km/h) and achieves 0-60 m.p.h. in just 2.8 seconds. With that kind of speed at your fingertips, potential drivers will be relieved to know that the Mono comes fitted with an inbuilt FIA compliant rollover structure. Here’s a bit from the press release on Codemaster’s site:

“BAC is immensely proud and excited at the release of GRID 2: Mono Edition; a game which offers an opportunity for one lucky person to own a truly unique supercar,” said Neill Briggs, Project Director, BAC Mono.

“Codemasters has developed a stunning game which focuses on delivering the ultimate driving experience and Mono is the ultimate expression of this, in both the real and virtual worlds.” 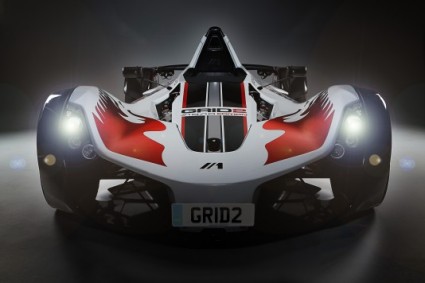 Basically, you’re buying the car and getting a game and some other fun stuff. Let’s not beat around the bullshit.

Unsurprisingly Grid 2: Mono Edition has been shortlisted by the Guinness book of records as the World’s most expensive video game on the market.

GAME is the only place you can buy this special edition.

So, if you’re looking for a bargain on Grid at a low low price then you might not want to buy the ultra cool and expensive race car edition here.