Super-slick remasters are all the rage at the moment, although it’s fair to say that a few of them have been closer to a rust bucket with a slap of new paint rather than a thorough refurbish. I’m looking at you, Halo.

The good news is that this is far from the case with Borderlands: The Handsome Collection. It’s not free from faults (or vaults); not at all, but this solidly remastered, collaborative effort by Gearbox Studios, Armature Studios and Iron Galaxy Games, packs so much bang for buck on the one disc that it’s hard to come up with any reason not to add this to your… handsome collection…

For those out of the loop, The Handsome Collection includes Borderlands 2, Borderlands: The Pre-Sequel and all of the DLC from both games, all wrapped up into a neat package. Unlike remasters of the past which have made multiple games accessible via a single user interface, both games are installed separately from each other, so should you wish to pick one and save some much-needed HDD space, you can. Editor’s note: This is not the case on the PS4 version; they are installed as one package. 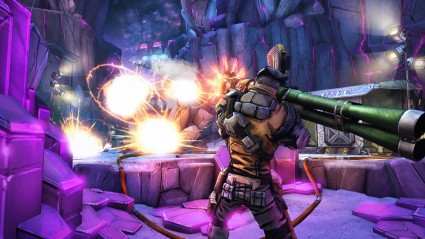 More explosions than you can shake an RPG at.

In case you’re unfamiliar with the planet of Pandora and its colourful locals, here’s a quick recap of the situation: In Borderlands 2, four Vault Hunters arrive on Pandora with the singular focus of getting involved in the loot-fest that is hunting for a vault. Along the way, Hyperion CEO and all-round bad guy billionaire, Handsome Jack, attempts to kill them all and works towards opening the vault himself. Borderlands: The Pre-Sequel takes place as a flashback to a time before Borderlands 2, where Jack enlists the help of a separate pack of Vault Hunters to help him gain control over Hyperion and all its operations, including the massive Helios Space Station hovering above Pandora and the moon. These new characters bring with them their own sets of skills, similar to that of previous Vault Hunters, as well as their own unique and hilarious voice-overs. Having fully recovered from my last bout of Borderlands-fatigue from the Xbox 360 era, I jumped straight in to Borderlands 2 to figure out what’s what.

The most noticeable improvement is, of course, the graphics. It’s arguable that Borderlands‘ well-known cel-shaded artwork doesn’t lend itself well to a high-definition touch-up, but the resolution upgrade to 1080p leads to a much cleaner and crisper experience all-round. The texture work is top-notch and nicely enhances the stylised look of the characters and the landscapes alike; although there is a silly amount of pop-in that occurs when loading into new areas or respawning. The colourful menus benefit massively from the graphical overhaul, becoming much sharper and cleaner as a result. While The Handsome Collection is certainly better looking, it does suffer from a touch of framerate stutters here and there. 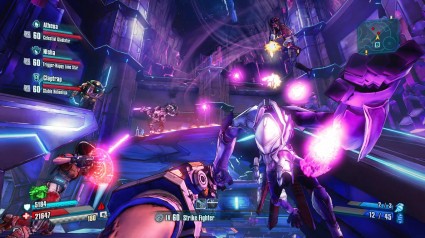 Ooh, so shiny and… purple.

Many of these issues arise in the new split-screen co-op mode. It’s great to be able to have up to four players on the same system, side-by-side on the couch. However, as was the problem with these games in the past, the field of view is so tight that it becomes nigh on impossible to see a lot of what’s going on around you. Couple this with the menu system becoming too large to sit on single portion of the screen, and the fun very swiftly turns to frustration.

Thankfully the online co-op is super tight, and by taking advantage of some of the online features of the current-generation of consoles, dropping in and out of a co-op session is very easy. Make no mistake, Borderlands is just a stupid amount of fun when playing with friends. The scaled nature of the gameplay means that the more people you co-op with, the more enemies there will be and the better the loot. This kind of system, one that rewards you for playing with friends, is exactly part of what has made the Borderlands games such a killer multiplayer title in the past and it hasn’t changed with this latest iteration.

Being a Vault Hunter is dangerous business, so to make sure you can get business done, you’re gonna need some guns. Lots of guns. Loot is mechanically the core of all Borderlands games, happily flinging reward after reward at you like Santa throwing candy at a street parade. It’s also a loot system that works for the most part. Kill a large boss, chances are they’ll spew out a rainbow-coloured selection of Pandora’s finest firearms, money and other upgrades, and no two of these are ever really the same. Such is the brilliance of the randomly-generated loot system built by Gearbox, that they have been able to craft such a tightly balanced experience whilst providing a vast array of toys to enact wanton destruction. 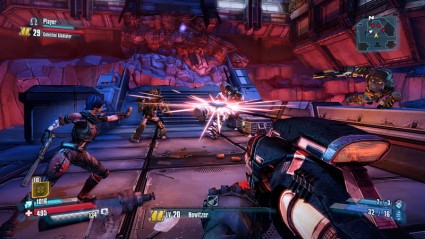 One thing that was missing throughout Borderlands 2, and now rectified in The Pre-Sequel, was the scaling of enemies out in open areas depending on your current level. In Borderlands 2, for example, if your level 30 character takes down a level 15 boss, don’t be expecting some big-time loot. Loot level is tied down to the enemies you attack and the areas you are moving through, which makes coming back for the side-missions you may have missed – or the DLC after completing the main game for that matter – a bit of a thankless task. This is changed up in The Pre-Sequel, with enemies out in open areas scaling up to match your own progression. Side-missions will still have enemies scaled back to the level that mission recommends, but this is fine. At least anything you encounter on the way will continue to be a challenge as well as a way to scrounge up any extra XP you may be after.

Even though the DLC may, in some cases, not yield the rewards you are after, that’s not to say it isn’t worth your time. Far from it. Borderlands 2‘s main story clocks in at easily over 30 hours, but when you include the DLC and side-quests as well, that figure easily blows out to well over 100 hours for the completionist. The Pre-Sequel is a bit shorter with the story clocking in at around 20-25 hours; however, including all the additional bits and side-missions you’re still looking at over 40 hours’ worth of content. On top of all that, both games offer multiple playthroughs, which not only increases the difficulty but also increases the output of rare and powerful loot. If shooting things for loot is your jam, in terms of sheer bang for buck, The Handsome Collection serves it up by the vault-load.

There are more differences between Borderlands 2 and Borderlands: The Pre-Sequel, even though at their core, both these games are unmistakably Borderlands by nature. Shoot, loot, rinse and repeat. However when you look a little bit closer, the differences become apparent. 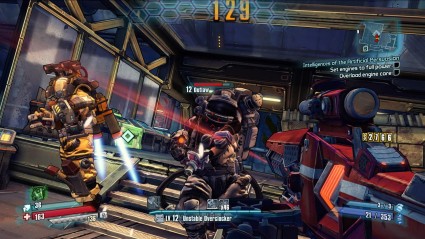 Firstly, in terms of map design, Borderlands 2‘s Pandora is considerably more forgiving than the moon. As The Pre-Sequel is set largely in the vacuum of space, the possibility of running out of oxygen is always present, as is the risk of driving off one of the numerous cliff faces into a pool of lava or ice. Pandora is also a more vast and varied landscape, whereas the moon is quite a bit more vertical with plenty of ledges and hidden areas, requiring some outside-the-box thinking to traverse from place to place.

The campaign experience is also a little different between the two. Where I felt Borderlands 2 was good at showing off just how vast and open the world of Pandora is, The Pre-Sequel’s narrative leads down a slightly more directed path. Despite plenty of side-missions being available, the flow between those and story was such that it wasn’t until close to the end of the game that I bothered leaving the main path behind and heading back for some of the non-essential stuff.

One of the original criticisms of The Pre-Sequel was that, to some, it felt like little more than an elaborate Borderlands 2 mod. Early on in my playthrough, I pretty much agreed with that sentiment, though perhaps not quite as cynically as some others. Whilst there are some glaring similarities – it is a Borderlands game after all – there is more than enough extra here to make The Pre-Sequel feel like a standalone entry in the series. The addition of new modifiers, like O2 levels and low gravity has opened things up for new mechanics, such as the slam attack. Here you jump then tap a button to slam back down to the ground, knocking enemies flying. These sorts of changes are subtle things that add to the already burgeoning list of gameplay multipliers. 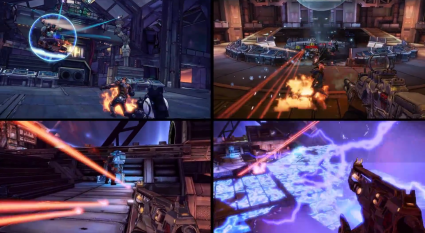 One unfortunate side-effect is that The Pre-Sequel suffers from a lack of fine polish, with some small bugs sneaking through into the final release. Lightning arcs from weapons will hang around in mid-air, long after you’ve fired your last shot. Jetpack Scavs occasionally moonwalk their way through the sky. The problems are subtle, but placed next to the superb polishing job done on Borderlands 2, they stand out clearly. Thankfully, these points weren’t enough to ruin it for me.

As an Aussie myself, I found that the distinctly Australian humour and charm of The Pre-Sequel had me laughing like a damn fool, despite some weak writing in parts – another mainstay of the series. It’s also hard not to feel a small sense of melancholy upon hearing the kookaburra cackle in the 2K Australia opening sting, due to the studio’s recent closure by parent company, 2K Games.

So there you have it. Yes, it has a few issues, but they won’t impact your experience in any meaningful way, unless you intend to play entirely in split-screen mode. There is so much game here for your dollar that I can’t say anything except this: If you’re a fan of first-person shooters, or if you haven’t played a Borderlands game before, there has never been a better time to gear up and get lootin’ with Borderlands: The Handsome Collection.