Before I start this review, I want to get something off my chest. ARRRGGGHHHHH! Right, that’s better. Now I’ve got that out the way I shall explain that Ethan: Meteor Hunter is a physics-based puzzle-platformer.

The story is briefly explained in an opening animated sequence that sees Ethan fighting with another Rat and is then serendipitously hit by a meteor. This impact leaves Ethan with a time-pausing capability, telekinetic powers, an odd desire to go collecting bits of broken meteor and a death wish. The latter seems to occur at a higher frequency than the former elements, or certainly did in my case.

Ethan: Meteor Hunter is at its heart a platformer with the mind of an insane scientist intent on causing suffering to all that may enter therein. I found it extremely frustrating at times due to the sudden need to mix puzzle thinking with deft platforming skill, leaving me with the conundrum of, “How the hell am I supposed to do that as well?”

The bulk of Ethan: Meteor Hunter follows a familiar format of platforming and block movement, which is then broken up with some other types of gameplay to give it some variety. These include pogo stick levels, which will be immediately recognisable to anyone that’s played Doodle Jump. As bitterly twisted and as joypad-throwingly-frustrating that these pogo levels are, they are satisfying to complete. There are some side-scrolling shooter levels which are fun and simple enough to keep you playing and allow you to rest your mind a little.

Through most of the levels you will have an enjoyable time, jumping and timing the seemingly untrained rodent through all manner of obstacles. Ethan: Meteor Hunter is fiendish in its approach, with some puzzles being particular awkward and difficult.

Ethan is able to jump onto different types of platform; these may be solid, moving or disintegrating where you only have a second or so to react and move to another platform or risk being shot, minced, mashed, burned, dissolved in acid, electrocuted or a good mixture of all of them. Pixel-perfect timing is everything on many of the later levels, something I found little comfort it. 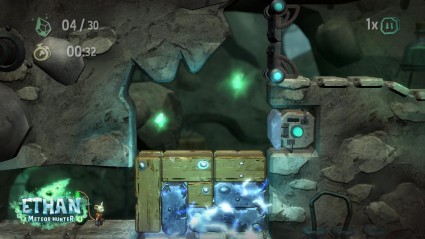 Puzzles can seem obvious at first, then comes the sting in the tail

For the completionists among you there are many little bits of meteor to find on each level and some levels have hidden cheese to locate. Both the concealed fromage and the green meteor bits can appear in some harder-to-reach places and if you want these, you’re going to have to think. Levels are also timed and the clock continues to tick even when you use Ethan’s pause time power. It is quite possible to get so good at these levels that they can be completed very quickly compared to your original attempts, if you are willing to punish yourself.

Any game that can wind you up and make your palms sweat has to be a worthy adversary. Frustration levels are not too dissimilar to the likes of Mega Man or the more recent Super Meat Boy. Ethan: Meteor Hunter sees to it that you normally have a restart point that’s a little way off from your likely demise, but not that far away so that you’re having to start the level again. There were occasions though that I felt the game was cheating me and making me start a particularly evil set of traps, just because the developers thought it would be fun.

Many puzzles are based on the need to pause time, and to enable this capability you have to collect pause tokens. These tokens can then be activated immediately or later when something appears to need moving to enable you to continue forward.

The puzzles vary but a key fact remains that sometimes, due to fact Ethan: Meteor Hunter utilising a physics-based engine, there may be more than one way to get around a problem. There are a few different types of object that are manoeuvrable and when time is paused these are shown to be inside specific dot-outlined areas. These give you an indication of the limits of the puzzle, but this doesn’t necessarily make them any easier. Some sections are so unforgiving that despair will consume you. Stick with it though and you are rewarded with a completed level and a feeling of “how did I do that?”

It is very noticeable at times that Seaven Studio want you to panic and stress. There are sections where you have to run away from something chasing you like spiky wheels or flooding acids. One rolling section stops you from running purposely, so that even if you have built-up a head start, the spinning pointy killing machines are right behind you. It’s great that you have a level of immediacy and you really want to succeed, but it’s also a chink away from the invisible fourth wall.

The developers have clearly spent a lot of time twisting and crafting the puzzles in such a way to make you think you can reach a platform or collectible. While this comes out in the wash at times, on the whole Ethan: Meteor Hunter can be fun to play, but there is imbalance of enjoyment versus aggravation to be found along the way. 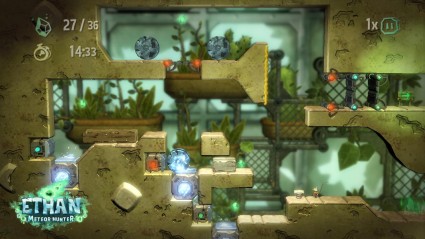 This particular puzzle had a small-but-frustrating bug in it.

Hunter or hunted?
No matter what I’ve written here, if you enjoy fiendish puzzles and honing muscle memory routines, then Ethan: Meteor Hunter is definitely one for you. While there isn’t a meaty story or any real reason why things happen from level to level, the need to beat a set of puzzles and move onto the next is very strong. I found I played it for hours at a time; I had to beat a level, even if it meant restarting it twenty times or more.

I experienced a few bugs along the way, but I was playing a review version and I’m hopeful that these bugs have been resolved in formally-released versions on PS3 and PC. A particularly odd bug cropped up on one of the penultimate levels of world three where two points had to be electrically charged before I actually started the puzzle. However, on a few attempts, try as I might I couldn’t win. I soon realised I had to move the item using the time pause and then restart, but even then it didn’t always reset properly.

I think to really be perfect Ethan: Meteor Hunter needed to be a little more forgiving and stop cheating its own physics rules to further its own demoniacal goal. Confusingly, I both enjoyed and hated Ethan: Meteor Hunter in almost equal measures along the journey to the end. While I feel it is reasonably priced, I have to insist you try before you buy to save your tears.