The rain is driving down hard at Watkins Glen International as the rolling grid moves towards the start/finish line. I’m starting well towards the back of the 36 car grid in my LMP1 Prototype, and I can hardly see a thing. The setting sun is heavily veiled by storm clouds as I turn my headlights and wipers on, but there is already such little visibility from the cockpit that there is almost no point. My mind turns to survival; I have to make it through the first lap, and from there I can build a rhythm.

“One corner at a time“, I tell myself as the field edges closer to the green flag. My race engineer barks loudly over the intercom. “We’re coming to the green… I’ll call it for you” he says. The tension rises as I roll towards the lights, waiting for the call.

Project CARS is a unique racing title brought to life by the experienced crew at Slightly Mad Studios (SMS), of Need for Speed: Shift fame. Funded via their unique, in-house WMD (World of Mass Development) Portal, SMS positioned themselves as such to allow player involvement from the very outset of development. The result is a broad-reaching, highly scalable simulation that succeeds in pushing the limits nine tenths of the way, only to sputter across the finish line.

Okay, perhaps that’s a little harsh. I shouldn’t gloss over the scope of what Project CARS is trying to achieve, which is to be the most advanced racing simulation available on PC and consoles. In many ways, it is just that. It simulates everything, from flat spots on tyres, to rubber build up on the track, and brake and engine temps. It even takes into account how atmospheric pressure and temperature affects engine horsepower – seriously?! 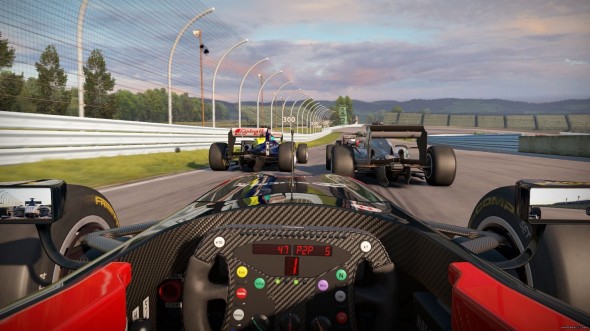 The Career mode harks back to the days of Codemasters’ seminal ToCA Race Driver series. Everything is open from the start – no grinding all the unlocks here. Simply pick the discipline you wish to start in, be it Karts, Touring Cars, even Formula 1, and sign a contract with whichever of the teams offers you one. From there, it’s all up to you. You can continue to climb the ladder, moving from team to team, discipline to discipline, or you can choose to stay and dominate one particular championship. For those who prefer more direct objectives, there are the Historic Goals, which act as overarching goals for you to work towards. You can race how you want, where you want, when you want. These are the kinds of details that we sim racers have come to expect. For those of us who aren’t so inclined, it gives an insight into the level of detail that SMS have tried to achieve here.

In many ways they have succeeded because when Project CARS fires on all cylinders, it’s wonderful. Everything looks stunning and detailed. The transitions between dry and wet tracks are super; it’s awesome to watch the weather actually changing as you drive. You can see the clouds roll in and the light start to change. It leads to being able to make on-the-fly strategy calls. The cars are all quite unique in their handling traits, and with a wheel on PC they all feel fantastic - the road cars feel a bit lazy when you push them, but this is how they should feel. I can’t really stress just how much a good wheel elevates the driving to the next level, however; especially with all of the assists turned off.

It’s truly unfortunate, then, that with a controller things get quite a bit more difficult. Driving on cold tyres can be nigh on impossible in some cars, even with all the assists turned on. Driving in the rain is even more difficult, putting some gamepad players in a position where racing in the wet is simply not an option. A quick look on online forums shows that whilst not everyone is having controller issues, it’s certainly something that needs to be addressed. SMS have recognised this and are reportedly working on a patch for controller users at the time of writing. 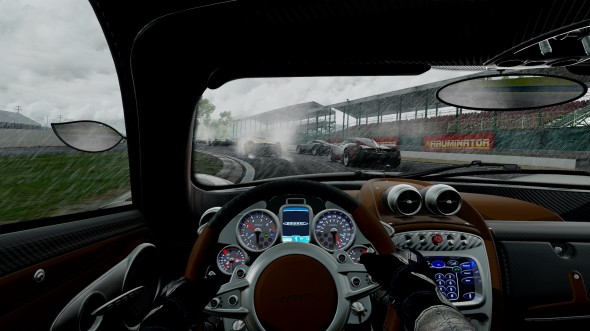 For now, it helps that Project CARS is a highly tuneable experience. Even the console versions have a myriad of sliders to move around and change. Parameters from controller sensitivity to camera field of view, a feature appreciated by all sim racers, can be edited and tuned to your pleasing. In fact, some controller issues can be solved by playing with these sliders, or by delving into the intimidating world of car setups, but all the customisation in the world won’t help when the other problems start showing themselves.

Firstly, it’s little things that niggle, like being able to pick a car number in Career mode but never actually get to race with it, or the info ticker in the menus mentioning a race engineer that doesn’t exist. “Why not ask the engineer about set up changes?” it clearly advises, with no such feature available. Many of these things will go unnoticed, but for a game that was delayed several times to polish things up, there is a distinct lack of sheen here. Things get even worse when A.I. joins the mix.

Let me just state at this point that, generally, I think the A.I. races really well. At times they seem human, racing hard for position and defending when they have to. Some drivers will let you by when they see you have the corner; some will make it much harder for you to pass them. Sadly they are also super aggressive, and seem to run on a different plane of existence to the player car altogether. 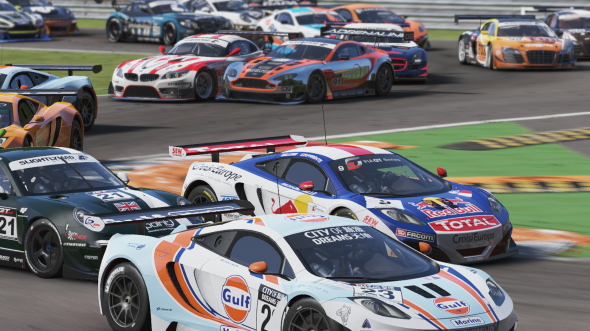 Try and make it out alive.

When the rain starts pouring in the middle of a dry race, don’t expect the A.I. to drive into the pits for wet tyres. They appear just as fast in the rain on dry tyres as they are in the wet, so whilst the player gets the full complement of aquaplaning (where tyres skip along the top of the water on a wet track, causing massive grip loss) and lack of grip that a wet track provides, the A.I. keeps on charging around several seconds faster than should be possible without so much as a pit stop. A.I. can also run off-track, floor it and seemingly make it back on track with no problems. The player car, however, inexplicably hits a brick wall and slows to a crawl, even if you put a couple of wheels off the track. You can plant the throttle with all your might, but it will feel like you’re trying to force your way through a swamp.

Thankfully, not all of the racing action is dubious. Multiplayer racing is superb fun and simple to set up, and arguably where you’ll get the best experience. If you find yourself in a room full of decent drivers (without A.I. accompaniment, although you can have up to 12 A.I. should you choose to), Project CARS positively shines. Up to 16 players on consoles and 32-bit PC’s, and 32 players on 64-bit systems can race a full race weekend, including practice and qualifying, with a full complement of dynamic weather and day/night cycle. I had very few connection problems, if any, and netcode lag never really proved to be an issue for me either. 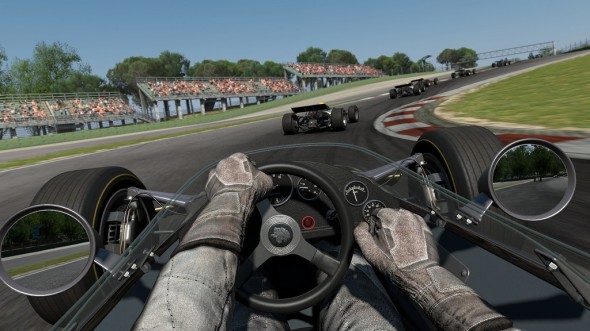 More players means more people likely to be ahead of you…

With this, the abundance of A.I. issues are an annoyance that can easily be palmed off. SMS have been more than open about their post-release support, stating they intend to continue developing the game over time, but that’s not really the point. Again, we have a game that is so bursting with potential to take the racing genre to the next level, only for it to suffer from odd design choices, or standard features that currently aren’t working properly.

A project still in progress

My optimistic side tells me that despite its glaring issues, Project CARS will eventually climb to the top step of the podium. It certainly has the potential to do so. Dynamic weather and track conditions make it the least static driving experience on console by far and on par with top level PC racing simulations like rFactor 2. When it works, the A.I. is stellar, but there’s that qualifier again: When it works. Far too many smaller problems stop Project CARS from being everything it truly sought out to be from the outset.

In its current state, it’s fair to say that some console players will have trouble getting to grips with controller sensitivity, and that PC fans, specifically those with a wheel, will get quite a bit more from the experience as it stands now. If you’re a racing fan, it’s worth it. The sheer level of unexpected detail is staggering, though not as staggering as the absence of expected details. In saying that, if you’re on the fence, or even just a casual racing fan, wait and see if things pan out. I predict that, like DriveClub before it, things will improve massively over time.

The potential for greatness is there and is plain to see; we’re just going to have a wait a little longer for it to be realised.

Recently, between the time this review was submitted and published, Slightly Mad Studios released Patch 1.4 for all platforms which manages to fix a number of the issues mentioned above. For those who don’t have internet and can’t access the updates, you’re shit outta luck. But for us lucky folk with all the interwebs we could ever need, the patches are there for download now.

For starters, the controller issues on Xbox One are fixed, and I’m very happy to report that they feel at least a billion times better than they did before. Support has also been added for the haptic feedback in the controller triggers, and the sticky steering bug is gone. Racing around Azure Circuit is now possible.

A full list of the updates can be found on the Project CARS forum. Featured is a number of AI improvements, including changes to the way they attack some of the tighter tracks to make them even more challenging, and making sure they react correctly to racing a wet track on slick tyres. The AA/ghosting problem on PS4 should now be fixed as well.

In short, the latest patch goes quite some way to putting Project CARS closer to the top of the podium. If SMS keep pushing out content and updates/fixes as regularly as they have been, Project CARS is primed to make its mark on the racing game landscape in a very big way.