It had been a rather long time since I had picked up my DS to play anything. In fact, the last time I remember even turning it on was to play through the last Layton game with my wife. With that in mind, I was actually excited to get started on playing Aliens: Infestation.

It wasn’t just because I hadn’t played a DS game in a while, but because it was an Aliens game! I grew up watching these classic horror films and have always been interested when the rumours of a game in the series would surface. I was, however, a little apprehensive. I wasn’t sure that a 2D Metroid clone would really be the way to go with this, let alone on the DS. It turns out that I was in for some surprises….

They’re coming outta the walls!
The story picks up shortly after the end of the third Alien movie (directed by the now very successful Hollywood director David Fincher), at which point the Colonial Marine Starship, U.S.S. Sulaco is found drifting in space. You are then sent aboard the ship to investigate what happened to it and its crew. You take command of the investigation of the U.S.S. Sulaco as a group of Colonial Marines.

Armed with the traditional rifle and handgun, you must find out the mystery of what happened to the ship. The game does not take place entirely on the Sulaco; sometimes you will find yourself on a planet surrounded by masses of aliens. Even more interestingly is that the game mechanics change as it has you driving cars, mech suits and even floating around in the cold vacuum of space. 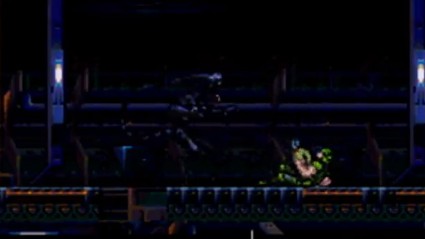 Game over man! Game over!

It’s game over man, it’s game over!
To start off I would like to say that I am not a fan of when games try to reinvent the wheel; like giving some sort of in-game reasoning for why a character is nearly invincible. However, the way the life system is handled in this game is nothing short of genius. Instead of having a finite number of lives, you have a finite number of characters in the game. You can have a maximum of four in your party at any given time, but when one of them dies, they die for keeps. You can only get another “life” by finding another marine to take the place of your fallen comrade.

Not just satisfied with a clever life system, each character even has their own dialogue in reference to every conversation in the game. So you will find that no matter what character you are rolling with, you will always have dialogue that is relevant to them.

There are a whole host of different gadgets to be found, but the most important ones (or at least I think they are) are the weapons. The list of weapons is limited, but has all the standards; light machine gun (pulse rifle), heavy machine gun, flame thrower, shotgun, and you can upgrade each of them to be more powerful. Other equipment such as explosives and grenades come in handy against the larger enemies, and to open previously closed paths.

Each new ability and weapon allows you to progress that bit further in the game, which is pretty much the way these games always work. It is a little bit straight forward, but I can assure you that what the game lacks in difficulty to figure out the next step, it more than makes up for in difficulty to complete. The enemies at some points are absolutely hard as nails, and they come thick and fast. Many a time while playing I found myself swearing out loud and being stared at by my wife, all because too many enemies appeared at once and killed my last soldier.

The enemies that you will see in the game are pretty much the ones from the films, but in terms of artistic license, the game follows Alien 3. By this I mean that they are not shy about having the aliens bond with our animals. So you get to see some pretty interesting new additions to the Xenomorph race. 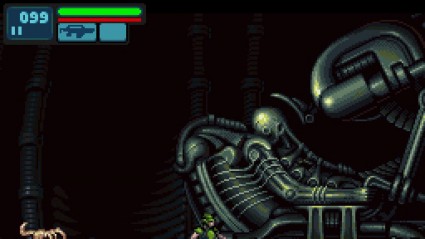 They mostly come out at night. Mostly....

There is a little easter egg that you unlock about 50% through the game, in the form of a little arcade game called “The knife Trick”. Those of you who are familiar with the films will know that this is referencing the classic scene where Lance Henriksen’s character, Bishop, performs an astounding trick. What he does is holds his hand over another person’s hand, fingers spread apart and then jabs a knife in and out of the gaps between the fingers.

The game obviously takes advantage of the DS stylus and shows the image of a hand on the screen, which you tap the spaces that are highlighted in red. This is great homage to the films, and is actually quite entertaining even although it is very basic.

You look like I feel
When creating a horror game, it is probably in your best interest to be as realistic as possible to maximise the scares. Alien Infestation, however, came out on the DS and as a result the graphics are pixellated and not particularly ground-breaking. Although, I will say that it is interesting how little that matters once you immerse yourself into the world.

The H.R. Geiger artwork that was the inspiration for the incredible scenes and creature designs in the movies is not quite as impressive to look at on a DS screen. You can tell, however, that they have made a great effort to make it look as good as it can for the format.

Wee woo, wee woo, wee woo
One of the main attractions to the game is that the sounds are all originals from the movies. All of the weapons, Alien screeches and even that really creepy radar can be found throughout. It is a bit of fan service that makes you smile, but then you realise that it isn’t just because of fan service that the audio has been so closely based on the originals.

It is because the sounds from those movies are perfect for the scenario, and they work equally well in the game. I can think of many an occasion while curled up on the couch in the dark where I have been listening to the slow… repetitive… beeping. It gets the blood pumping and the nerves firing.

If I have one piece of advice for you, it would be to play the game with a good set of headphones; it aids the atmosphere by drowning out all external sound and means you don’t have to hear everything through the slightly tinny DS speakers. 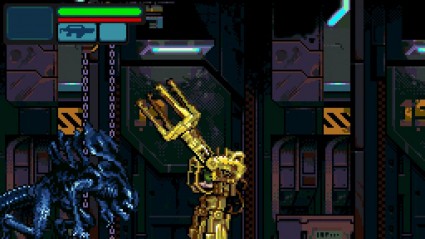 Get away from her, you bitch!

In space, no-one can hear you tremble with excitement
One thing that I find games struggle with on a consistent basis is atmosphere. Even with incredible landscapes, high texture models and the highest quality sound, it can be a difficult thing to attain. If you want to play a game that has an atmosphere that will give you goose bumps and make your hairs stand on end, then you have to play Aliens: Infestation.

To the casual observer it may look like nothing more than a mere Metroid or Castlevania clone, but if you dig a little deeper, you will find an immersive experience that is difficult to come by on the handheld market. I would be ecstatic if this were to spawn sequels and become a successful franchise in its own right.

Alien: Infestation manages to use classic tropes of the 2D side-scroller, but includes a lot of intrigue and story, with little bursts of originality in the mechanics. It casts aside all the doubters, who say that tension cannot be built on such low-grade sound, lesser graphics and two-dimensional playing fields; it will give you tension and scares by the bucketful.

Oh, and by the way, you should definitely play it in the dark.