Oh, times at the arcades were fun. The innocence of throwing away your mother’s hard-earned cash. ‘Just one more go…’ I would say. Growing up, I used to go to the arcades in Southsea every other weekend. I was a sucker for many of Sega’s arcade boards; titles such as Virtual Striker are still etched in my mind. I will always remember stumbling across an arcade in 1994 at a small town called Playa De Aro in Spain, where there was a two-storey arcade with its focus point around an Afterburner cabinet that spun three-hundred-and-sixty degrees.

Then there were some of Sega’s iconic racers, Sega Rally and Outrun being the two most noteworthy, but all this time I left Daytona USA out like it was the kid at school that never got picked for a soccer game. Now the game has returned on a console I own, it was my chance to see what everyone was banging on about when I was younger. Is this game actually any good?

As the game features no storyline at all, I thought I would give you a little back-history regarding the title. Daytona USA was originally released in the arcade in 1993. It was then ported to the Sega Saturn in 1995, somewhat unsuccessfully, as the controls were pretty clunky. Sega then re-released Daytona USA with improved visuals in 1999 and even the Sega Dreamcast ported over this improved graphical version of Daytona shortly after. The game adorns almost every arcade you are ever likely to find, and was one of the first games to offer link-up play between multiple cabinets. 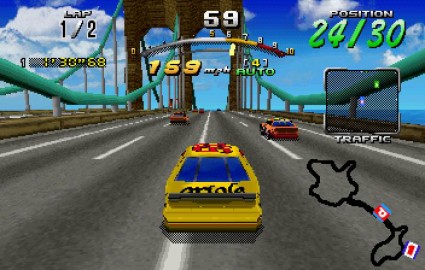 How the game used to look

Driving me around the bend
Daytona USA brings back the classic Arcade mode to present you with three tracks that were iconic in their day. The beginner track is a speedway track so they could get the Daytona license, but the other two tracks have nothing to do with Daytona at all apart from the stock cars.

The game offers two cars, one on automatic transmission and the other on manual. Whilst it may appear on the surface that this area is lacking, the difference between manual and automatic transmission changes the game immensely. With this being an arcade racer and emphasising maintaining speed and not hitting the wall, there is little consideration for car moderation or different top speeds etc.; it’s simply not needed.

The cars feel nippy and cut into the corners like a cruise ship cuts into the waves. You still need to brake or manually drift around corners to ensure you don’t crash, but all-round the feeling is satisfying. Those nostalgia fans will be delighted by the fact that the game feels like a true clone of the arcade board, in terms of the Arcade mode at least. Everything feels exactly like the arcade. To get the true experience, though, I cannot recommend using a steering wheel enough; without it, the game loses some of its spirit. 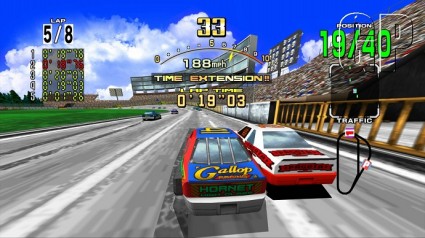 Now with an upscaled gloss

It isn’t just the Arcade mode that this game offers. Daytona also features a Time Trial mode, Survival mode, Karaoke mode and Challenge mode. In Challenge mode you complete a series of ten challenges per track. These vary between hitting checkpoints on time, knocking down a number of cones and doing successful drifts. Karaoke Mode is perhaps the most bizarre. The game’s music (which we’ll get on to later) is quite unique, and Karaoke mode basically removes the vocalist and allows you to sing along to the song. In Time Trial mode, it is yourself just on the asphalt trying to knock out the best time possible.

Perhaps the best mode is Survival, however. In Survival you race against time checkpoints, of which you get an increased time for every car you overtake. These races consist of up to 80 laps, dependent on what track you are racing on. Madness! Each lap lasts just under a minute, so your commitment does not need to be too savage either.

Retro with a HD twist
Sega have definitely considered those with HDTVs in this reboot of Daytona USA. Displaying the game in 1080p gives you pin-sharp visuals, but they haven’t updated the graphics so much as just updated the resolution of output and given it a HD overcoat.

You have to respect this game’s age, however, and without that graphical edge to it, it wouldn’t bring back the nostalgia you would expect from such an iconic Sega game. At one point in the pit bay (in Survival mode you will need to use the pits because of tire wear on endurance laps), my tyres were being changed and they were clearly hexagonal in shape. It was pretty laughable, to be honest. 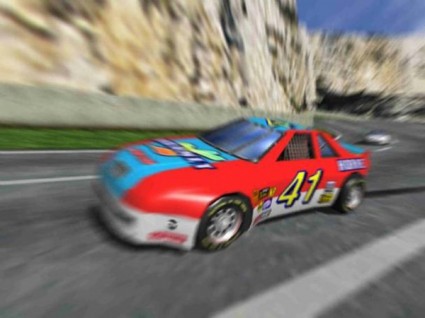 This speed will leave you in a blur!

So don’t expect ground-breaking visuals here; this is a fan service release from Sega and it does that well. It brings in the ‘ROLLING START’ graphics, and all of the arcadey in-your-face presentation, incredibly well. However, if you aren’t one that has a taste for retro gaming then give this one a miss, as you won’t appreciate the painstaking detail Sega has gone to making this game feel as authentic as possible.

DAYTONAAAAAAAAAA!!
Sega has been known for their quirky soundtracks, and if you thought that Outrun was peculiar, Daytona USA takes it to a new level. Some like it, because the soundtrack ingrains on your mind like a cancer with an unstoppable rebel force. To describe the soundtrack I can only imagine it being if Jean Michelle Jarre, Bill Bailey and Mike Oldfield were to all start dry-humping each other in a dark room with their instruments left on.

As for the other sounds, it all drives home that classic arcade vibe about it. The engine sounds are subtle but satisfying, and the sound of screeching tyres have a delightful ring to them when using the steering wheel.

Jumping beans more like!
Sega have tried to add in an online multiplayer, but for the PSN version it is a bit of a headache. Once you do find a lobby to play in, the races can be laggy as hell, because there is no localisation. Your car will jump up and down in the air as it tries to contend with connection issues, and that just isn’t good enough. Multiplayer all resides around the standard Arcade mode, so there really isn’t too much going for it in this area.

I understand Sega’s reason for not localising the multiplayer connection as it is not expected to get thousands of people playing this game, but the infrastructure doesn’t hold up too well and subsequently you’ll end up finding it too frustrating to persist with.

A podium finish?
Overall, Daytona USA does a great job of re-kindling the memories of the game’s biggest fans. For those not fans of the original, this title could easily pass you buy. With the multiplayer being sketchy at best, the asking price of £6.80 is perhaps a little on the steep side.