Hydrophobia is a Greek term that describes the fear of water. In English, however, it’s the later stages of rabies, but I think we shall stick to the Greek version for this interpretation.

What happens if you cross this fear of water and add in the atmosphere of a survival game, combine it with some gameplay from Tomb Raider? You get Hydrophobia, the game from the British developers Dark Energy Digital. As it happens, the Manchester lads allowed me to have a copy so I can tell you what it’s all about, and let you know if this XBLA title is worth breaking the piggy bank for.

Water, water everywhere and not a drop to drink

The game is set aboard a luxury ocean vessel that happens to get overrun by terrorists in the midst of a celebration. Taking the roll of Kate Wilson, you attempt to escape the carnage, using your skills as an engineer and your “rock climbing” capabilities. The terrorists want to kill everyone on the ship due to a population overgrowth, believing that the culling of the earth population will allow the survivors not to suffer from starvation or anything else associated with a population explosion. With the popular slogan “Save the World: Kill Yourself” stamped on anything people can see, you make the choice to go against what they want and to stop them before it gets out of hand. The storyline is a little hard to follow in parts and the beginning of the game doesn’t explain much, unravelling as you progress.

Sinking like the titanic
Similar to the likes of Tomb Raider, you have work out puzzles, such as getting from one end of a room to the other while completing a set objective and interacting with the environment along the way. Sometimes this will involve extinguishing fire, navigating through a flooded area of the ship or even climbing around like Lara herself. Once completed you move on to the next objective. The ultimate goal however is to escape the sinking city which is being flooded with water. After a little while you will then have the addition of combat with a gun that’s not really powerful to begin with. Its basic function is more of a futuristic stun gun, temporarily incapacitating your enemies. You can eventually get a variety of ammunition that is capable of killing the enemy. The levels are well designed and the feeling of claustrophobia does help the atmosphere along with being under pressure in parts.

The water is the most interesting feature in the game and plays a big part in navigating around. Depending on the actions you take when navigating a room, it could make your job of escaping a lot harder. Shooting out a pane of glass adjoined to a room full of water will make the water seep out into the room that you are in. This could very well engineer your own demise by means of drowning.

Aside from wandering around you also have to find codes that act as keys to open doors; these are split up into two parts. The first part is usually found with the enemy and the second is hidden on a wall to which your only means of finding it is a scanning device that you use in first person. This device is also what you use to open doors an activate anything electronic. Although the game requires some degree of thought, it does get repetitive and the only thing that adds something extra is collecting various items scattered, although they are not necessary to complete the game.

After completing the game you unlock the challenge room, which is a horde style mode that pits you against waves of enemies for you to defeat. Not only can you use the environment like you did in the main campaign, but you also get to added addition of manipulating the environment from a distance. Using the left trigger you can not only move objects and people but you can also manipulate the water too. This adds something different to the gameplay and opens up your list of abilities more. 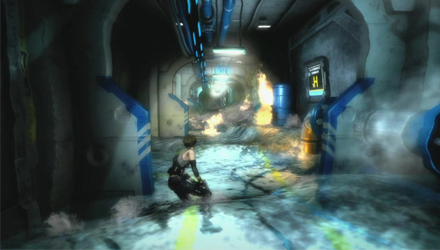 Clear as water
The look of the game is similar to what you would see in the likes of Mass Effect and has a very futuristic feel. The characters seem to be well modelled although the enemies pretty much look the same, their motions seem somewhat wooden, like a rod has been inserted firmly in a place that we don’t want to think about. Detail has been paid to the environment although it’s very repetitive and most rooms and areas look the same; this can be confusing at times.

That sounds like a tap dripping
Rather than have music blasting in the background, Hydrophobia decides to keep music to a minimum and use the environment sounds as its own score. Running water, broken electric wires and sounds of bulkheads buckling under the strain of the water really add to the atmosphere. The voice acting, however, is very annoying and I did often wonder why there were dodgy accents from the main characters. Kate sounds like she is holding off a Scottish accent or attempting to put one in on occasion, and Scoot, her boss and friend, sounds like he is putting on a bad Scottish accent. It’s not the best voice acting in the world but luckily for the most part of the game neither character is talking constantly.

Sink or swim?
The game isn’t broken even if a little annoying at times and the replay value is not only in the difficulty levels, but also in the way that you react in the environment, and the challenge mode and leaderboards. The game does play differently depending on your reactions and can be quite fun. The characters are not fantastic and neither is the storyline in which I didn’t quite follow what was unfolding.

I can’t really pick fault with the game other than the voice acting and the short campaign mode and even that doesn’t bring it down really. The game is very different from anything that I have seen or played with a similar theme. Unlike the likes of Alone in the Dark with its gimmicky, one trick gameplay addition of fire, the Hydroengine does make the game work as a whole as the rest of the gameplay doesn’t seem like it’s just been thrown in at the last minute.

This one is a difficult decision to make and although I have had a lot of fun with the game, I am not sure if it’s worth the 1200 Microsoft points that it’s being distributed at. It is a definite ‘buy’ if it was a little cheaper but teetering on the edge or ‘try’ with its current price. Don’t dismiss it because of the price but definitely give it a try; it is worth experiencing due to how different it is.