Review: Majin and the Forsaken Kingdom

When the chance to review Majin came up, I have to admit that I wasn’t sure I was going to like the game. I, for one, had never heard of it up until we were asked to review it, so a little research was my first priority. With my interest then piqued in the title developed by Game Republic (famous for the Clash of the Titans game) and published by Namco Bandai, I had to persuade the rest of the staff that they didn’t want to touch this title (using Clash of The Titans as my main point of reference).

Everybody who knows anything about me (and possibly even regular readers) will have worked out that I have a bit of thing about Japanese games, so much so that I will do anything humanly possible to play them. I will honestly admit that the TIMJ staff as a general rule have to fight me for anything made by a Japanese company (I use big samurai swords, they cut deep).

The game came and so I played, hoping that I wouldn’t be as disappointed with this as I was with Clash of the Titans.

What the hell is a Majin?

The game begins when a young, unnamed man (who is able to talk to birds) sneaks into a desolate castle in a cursed world to search for the Majin; a guardian of the land with legendary power. After encountering black, oil covered enemies he barely escapes with his life. Further in the room he finds the guardian; a giant monster-like creature nailed to the floor. After helping the beast escape, the guardian names him Tepeu and they both become fast friends, setting off to clear the darkness from the land and regain the guardian’s powers.

The storyline is very easy-going and most of the plot is explained clearly throughout, although it is a bit minimalistic. You can also optionally speak to the Majin for more of the story and he will explain different things throughout the game. At certain points you will get flashbacks, which are done in the style of Japanese shadow puppets, which adds a certain charm. I was more than satisfied with the simplistic premise of the story and the way it unfolds. The ending wasn’t exactly what I was expecting, but it end in such a way that made me think that Game Republic might be looking at a franchise. 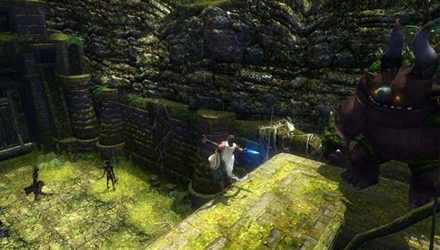 Puzzling... this reminds me of something

Kingdom of Heaven or is it more like Hell?
The gameplay is a little different. The first side to it involves you controlling Tepeu and sees you wandering around, exploring and defeating enemies with a basic combat mechanic. As you progress you have to work out some puzzles, these are pretty much a simple case of working out how to progress and are really not too taxing. The second aspect to the game would be controlling the Majin, this is involves telling him to follow, wait, attack and use special abilities as you unlock them. Majin is pretty much an A.I. but will do what you ask him to. Your health is replenished by Majin when either waiting or following you, but you mustn’t be in combat at the time. Majin’s health is replenished by small pieces of fruit and you can carry up to five of these at a time.

Fruit also plays a big part in upgrading our heroes, as you collect fruit which allows you to unlock abilities for the Majin; upgrading his health and stamina by feeding him fruit will help you defeat enemies easily. You can also collect memory shards and collecting enough of them unlocks pieces of armour for Tepeu. Each armour piece has specific attributes enhancing abilities. Tepeu’s abilities are upgraded by defeating enemies and collecting the small glowing orbs that are dropped by them. All the upgrades are applied automatically without the need for a skill tree, but they do make a difference.

When working as a team with Majin, you can do special moves which gain experience for cooperation. The move that you do together is dependent on where you are in relation to Majin, and you unlock more moves with further experience that you gain.

Before unlocking abilities you will need to defeat a sub-boss, and boss battles are one of the more interesting features of the game. Each boss battle is different, but will nearly always involve you utilising Majin in some way. Each are a puzzle in itself and finding the secret to beating them is a must. Don’t be disheartened if you don’t work them out immediately, though, as Majin can occasionally point out things that you may not have noticed.

If Tepeu dies Majin will try to revive him. If he can’t get to him, Tepeu dies and you can either go back to the main menu or continue the game. When you continue you will be taken back to the beginning of the area, so saving where you can is a must. To save the game you have to approach totems, which also allow you to change your armour and the various guises of the Majin once you unlock them. Majin must be close by or you will not be able to do this. 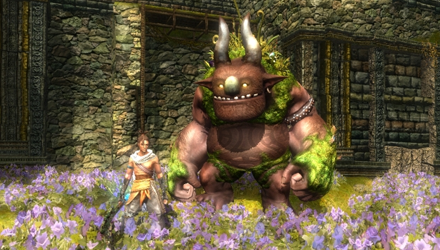 The RPG-lite elements give you something to work towards, but the game can get a little stale at times. Nothing is ever straight forward and you will find yourself wandering around with no clue as to where you are going. This exploring does make a change from being told where to go and what to do, but is quite tedious at times. Usually an educated guess will point you in the right direction, sometimes you will open up an area, but are unable to progress till later on due to lacking certain abilities. I don’t normally compare games but if I had to, I would compare it to likes of ICO and the 2008 Prince of Persia reboot. Both games have elements of partner gameplay and this is the main focus for the game.

A once beautiful land
Initially the game looks beautiful, but there are a few graphical glitches that are quite noticeable on the scenery and are mainly to do with the lighting effects. This is not something that’s a deal breaker, and if I am honest, unless you are specifically looking for faults, most people will not notice it. The characters are well designed and have a manga/anime feel to them. The enemies pretty much look the same throughout, with the exception of armour later on, and obviously the bosses which differ each time. It also dawned on me that the enemies are very much like the ones found in the Prince of Persia reboot; oily black humanoid creatures, one difference being that there is a hell of a lot more of them. The cut-scenes are fully animated and not intrusive like in some Japanese games, and the flashbacks are elegant with the style of a Japanese puppet show, similar to what you would have see in certain Zelda titles.

Majin shut the hell up!
The characters are voiced nicely but Majin’s repetitive words will grate on you after a while. Every time you give him a command he says something, obviously to signal to you that he is obeying your command, but when hearing it several times in the space of a few minutes, it gets a little annoying. The music is well composed and does change throughout each area and each battle.

Exploring the land or avoiding the darkness?
This is a very difficult choice for me, as I found a lot of enjoyment in this game. Part of me wants to outright say “buy it, buy it now” but I think that this may not appeal to everyone.

The simplistic story is a beautiful one and very easy to take in. The gameplay for the most part is fun and even with the game’s faults it’s still one that you can’t help but enjoy. Even the occasional moments of tedium are easy to overlook when looking at the game as a whole. Luckily, there is a demo on Xbox Live so make sure you check it out before plunging for this title. If you are still unsure then you should add it to the list of games for rental.