Need for Speed: The Run

After the impressive efforts by Criterion with Need for Speed: Hot Pursuit, it was a little disappointing to see the masters of arcade racers being pushed back from developing EA’s latest entry into the NFS franchise.

It gets to a point now whether you wonder if the series is ever going to be consistent year in and year out, and with that apprehension in your mind, it’s no wonder why fans of the series tend to get nervous. As the franchise itself is so heavily ingrained by high sales figures it is little wonder why EA chop and change developers, and some would argue that the series’ bold new direction this year is backed up by the idea that it needs new hotness to progress onwards for another decade. Is NFS: The Run another solid effort, or is this one worth taking the next exit to avoid?

To give EA added ‘oomph’ in expressing that this latest NFS game isn’t of the usual ilk, Michael Bay was penned in to provide a trailer for the game to add in some much needed hype, and it’s this trailer that shows off the game’s new direction.

As a part of this new direction from EA, The Run’s main feature is a proper storyline. You race as Jack Rourke, a street racer on the cusp of death and out to get one last cut of money, before retiring from the dangerous and seedy underbelly of street racing once and for all. In The Run you’re tasked with driving across America from San Francisco to New York in an event that could net you $25,000,000 dollars. 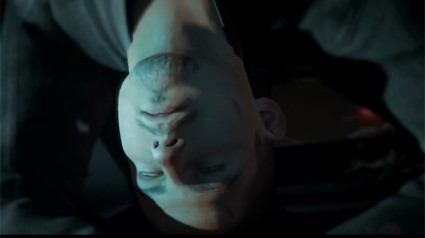 The race to wealth
Travelling throughout each state, you have the opportunity to drive into petrol stations and change your car along the way to face up to race battles, make up time and positions and deal with the vastly different terrain as you face dust storms and avalanches. The storyline features a few QTE on-foot sections to add to the drama, but whilst these visually look nice, they are far from immersive. The whole ‘drive across America’ idea is a great concept, but Jack has the ability to stay awake the whole time and not even be troubled by fatigue, which I think is a missed opportunity. Also, whilst you battle against specific characters, there is never any real intertwining of these, so as far as you are concerned you couldn’t care less who they were, or drive any passion into actually beating them.

As you progress through the career mode, you will unlock challenges which turn into medal affairs and plunge in existing race sections you’ve already been through, but in event-like disciplines. Whilst it adds an added longevity to the game, it is a missed opportunity to use these areas to change the game up more.

So what about the way everything feels? Well, NFS: The Run is a complete polar opposite to the Shift series and more akin to the feel of Hot Pursuit. For those unfamiliar between the two franchises, EA splits the NFS brand into two types of game; simulation and arcade-style racers. Handling is forgiving on most driving surfaces. Some cars are easier to drive than others, such as the majority of the BMW, Ford and Audi cars, but the more exotic cars require a little more skill. Whilst not painstaking to drive, muscle cars and super cars such as the Pagani Zonda require you to take a little less risk on the turbo boost and a little more thought when cornering. These cars generally have a higher top speed but there is always a catch 22 to driving them. 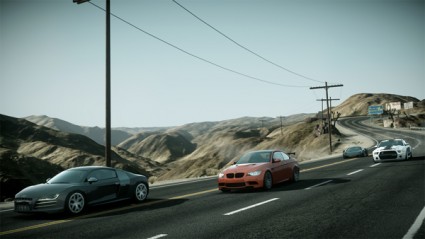 The long and winding road

Driving an Aston Martin has the heaviness but satisfying buzz about it, whilst the Ford Focus is a nippy runner that will tear through the corners with an alarming amount of traction. From this stand-point, it feels right. The terrains you face also feel well represented, and you have to change your car up to negotiate some of these areas efficiently.

It is when you start ploughing through the mountain ranges and contending with the icy road conditions where everything gets interesting. Cars will slide and fight for grip, and anyone over-exuberant with the throttle will pay for the cost when they smash through the barriers and fall down the cliff side.

Unfortunately, the Story mode can become incredibly frustrating from place 7/8th-1st. Some AI can feel incredibly elastic, with opponents overtaking you despite your finger being on the turbo boost the whole time. As well as this, going into the gas stations themselves can penalise you, with the checkpointing system being sketchy on the resets you get. These scenarios can be a game-breaker sometimes, and will take the most patient of gamer to see past their shortcomings. Needless to say, even on the easiest difficulty setting this oversight can become a problem.

As for the Challenges, whilst they re-use all the terrain from the tear-about across the States, the painstaking detail that Black Box have gone to in making these areas as diverse and as interesting as possible takes away from the fact you are playing the same race areas over again. This is helped by multiple routes on tracks to strategise risk against a better finish.

One thing that is irritating about the Challenge mode, though, is EA’s bull-horn marketing approach in getting you to buy extra content. At the car selection screen you have the chance to buy additional cars, that you could have otherwise unlocked by playing the game consistently. Anything for a bit of money, I guess! 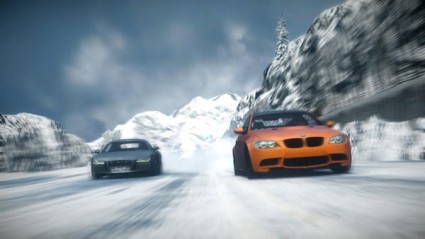 I think I’ve got Frostbyte
If NFS: The Run has anything in its arsenal, it’s that it is simply the best looking racer ever to have been released on a games console. Utilising the Frostbyte engine used in Battlefield 3, the game’s landscapes are seriously delicious, and every section feels different. From dust planes, to avalanches, straight through to atmospheric thunder and narrow mountainous roads; at every turn this game will blow you away visually, from the car renders to the tarmac, clouds and pastures.

Country road, take me home
Blackbox has done an incredible job with the audio on NFS: The Run. The sound of engines between cars are vast, and dramatic music blends in effortlessly for important checkpoints, whilst certain landscapes pave the way for relevant sign artists to mix in the flavour of where you are driving. It works extremely well, as your car radio cannot be pre-selected to what you want to hear. I like the idea, and the cut-in dialogue from your mentor adds to the sense of the occasion.

Sounds of tarmac being torn up by screeching rubber, wheels spinning over clumps of rock and ice boulders smashing all have a satisfying resonance to them. Needless to say, top marks in this area. 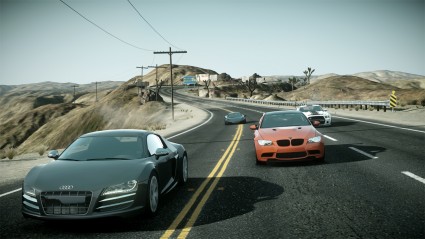 Autolog keeps the party going
We tried to sample the online as best as we could on NFS: The Run. We only had a 48hr online pass before EA insisted we go and buy one, but here are our impressions of the multiplayer.

Autolog makes a return (and expect it to remain in place in every racing game for the foreseeable future from EA), keeping you in-tune with your friends list to out-muster and send them challenges of your best efforts. A group party system is implemented on the PS3 version we played, so you can bounce between different lobbies effortlessly. Nice touch.

The multiplayer itself is a rank-based system melded with challenges. Complete a number of multiplayer challenges and you will get access to more cars. Challenges include number of overtakes, or number of races won etc.. You will have the chance to enter a series of races; at the end of each series, the person with the most amount of points will win. These race series vary in discipline, car manufacturer or the location in the USA.

Newly implemented is a bonus wheel system which is implemented before each series starts. It can be a new car award or additional XP, so on and so forth. It is a nice added bonus, and coupled with the ability to veto tracks, the multiplayer has been nailed down very well; there are no real complaints here. 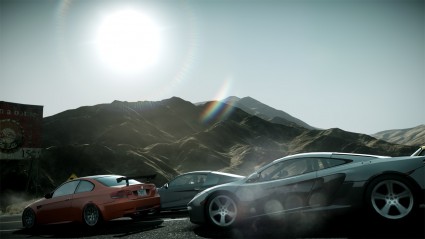 The hills are alive with the sounds of cars driving...

Coming second is first loser
NFS: The Run is a solid effort by Black Box, but you cannot help thinking that had it been left in the capable hands of Criterion, the job would have been done better. The annoyances of the Career mode can sometimes be a game-breaker, and whilst the storyline was an admirable idea, not enough work was done in twisting the plot and adding in characters to give anything other than a mediocre experience.

If you love a racer with graphics that will blow your balls clean off, then this is the game for you. Playing NFS: The Run is visually a car lover’s wet dream, and regardless of what Turn 10 or Polyphonic Digital has put out before it; they cannot touch the graphical prowess this game has to offer.