It has been an incredibly long time since an arcade game release that has got me totally addicted to high-score leaderboards. Then, just like a bus, two come out in the same week. Firstly we have Burnout: Crash (review forthcoming), and secondly we have a little-known game called Rotastic, from a small known developer in the heart of Paris. If you loved the addictive qualities of Popcap’s Peggle, then you are going to fall in love with Dancing Dot Studio’s simple but addictive arcade gem.

They should name crack after this

Rotastic’s core principles are to control a character that uses a rope to swing between anchor points. The game’s main goals include collecting gems, escaping traps, battling other players, smashing bricks, perfecting acrobatics and (oddly enough) smashing chickens. The game is ridiculously simple to get control of, but difficult to master.

Rotastic has great accessibility, with the game only requiring two buttons to play. The A button attaches you to the anchor point, and the RB button reverses your swinging motion to the opposite direction. Mastering angles and directions, as well as using quick reflexes, are key to being successful at this game. Whilst Rotastic offers no identifiable story, what it lacks in narrative is made up for with gameplay mechanics that ooze with satisfaction. 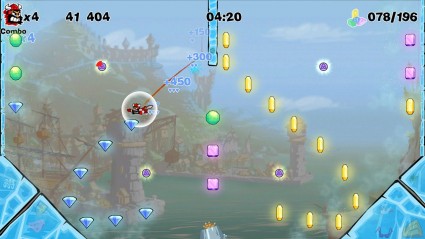 Swing when your winning!

If Rotastic was the name of a street drug, I can guarantee you that everyone would be ‘hooked’. The culmination of trick combos, speed runs and surviving death sequences melded with the zen appeal of collecting gems, takes the game to a higher echelon to that of Peggle, which until now, was a game I constantly returned to because of the scope of replay value. Attempting to top the leaderboards or get the coveted platinum helmet for each level never gets old, and for 800 Microsoft Points, unlike crack, this game is extremely affordable (and to pay for it you don’t even need to look into the avenue of performing sexual favours to fund your addiction).

The game features 70 levels set in 7 different worlds, and as you progress it grows incrementally harder. Approaching world 4, the game spikes significantly in difficulty. Don’t think you can breeze through the game passing on bronze helmets either; as you approach the midway point you will have to replay levels and get better ratings, to grab enough helmets in order to unlock the remaining three worlds. This approach by Dancing Dot Studios is very clever, as sometimes it is all too easy to breeze through games on the minimum grade. Forcing you to replay some levels with the skills you have acquired through constant play feels rewarding, and whilst the game is ball-achingly difficult at times, you never feel short-changed by the game mechanics.

A love child of The Behemoth
To describe Rotastic in a nutshell, you would have to force a love child between Peggle, Cut the Rope and Castle Crashers. The game’s visuals are all hand drawn, and bear a similar reference to that of The Behemoth’s work on the game Castle Crashers. The background scenery has a certain primal feel about it, and the character design is often a mixture between medieval and viking eras. This vibe is portrayed through the obstacles and scenery, that attempt to make your path a precarious one.

Speaking of the characters, more will unlock as you progress through the game, though the variation seems to be limited to colour and little else. None of the characters have special abilities, so to say that there is any incentive to unlock these playable swing-and-fling maniacs would be lying.

Graphically the game is satisfying; the visuals at times can be a tad bland, but there is no bad artwork present. Don’t expect too much pizzazz or visual eye candy, except for a colourful ‘zing’ indicating the trick you pulled off. If your game area is full of action, Rotastic certainly looks more visually appealing. As the game progresses more of that comes about, but in the opening levels you could be forgiven for mistaking the game for an Xbox Indie Games release.

You’ll be whistling
Delightful ‘clonks’ and ‘clanks’ of swords, as well as the sounds of chickens being popped are just a couple of the satisfying audio sound bites found within Rotastic. If there is anything that will really leave a lasting smile on your face, it is the narration, which can only be described as having the same voice actor from the opening credits of Spongebob Squarepants. The grizzly voice of the narrator is few and far between, but adds a real sense of atmosphere to the wacky world of Rotastic. Even when the game loads, the narrator is lauding the developers and publishers before the title menu springs into action. 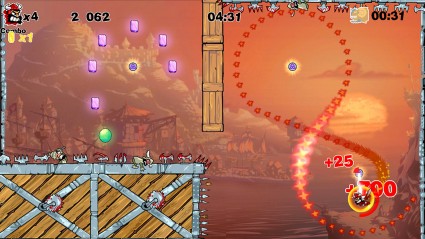 If you are a fan of the 8-bit or 16-bit era when video-game music was so memorable, you’ll be glad to know that although Rotastic has a very small selection of music, all of it is engraved on your brain so quickly you’ll be randomly whistling the tunes at work. Soundtracks vary from fast-paced percussion to brass, and set the scene for the game in the different worlds they reside upon. Despite the soundtrack being small you never sense the repetition, and fortunately none of the audio is annoying or overbearing, so your mind is dead on-task to swing, smash and swoop your way up the world rankings.

Cut his rope!
If you are a fan of multiplayer action then you will not be disappointed, or at least you won’t be if you have friends that actually come over to see you. Xbox Live play is restricted to global leaderboards, so the rest of the action will have to be with the person next to you. Rotastic offers four-player local play in two different game modes. Gem Collecting does what it says on the tin; you need to collect the largest amount of gems. With four on the go this is incredibly frantic, and despite initial impressions of being the least competitive of the two game modes, it turns out to be more entertaining than the Battle mode.

In Battle mode you have five lives, and your task is to cut the rope of your opponent until he falls off the map. The person with the most lives left after the set time limit wins. Battle mode requires you to be quick, fast and have a great sense of predicting where your opponent will go next. It only tends to work well if you are at the same skill level, otherwise it just gets boring. Whilst the multiplayer is somewhat lacking in game modes, there are plenty of maps which vary in difficulty, but the omission of Xbox Live opponents somewhat leaves Rotastic falling short after you have rinsed the game for all you can get. On the other hand, how many games do we see where the online servers are dead? Too many.

The final swing
If you were to ever part with 800 Microsoft Points, Rotastic is one of those games you just need to pick up. Its replay value alone is worth the investment. Furthermore, it is one of the more unique experiences on Xbox Live Arcade, and your rewards increase with your skill. The game has some tidy achievements, some frenetic survival sections and even will appease those that like their difficulty Super Meat Boy-style. Whilst it isn’t the best-looking game out there, it more than makes up for it with its skill-based gameplay.

Rotastic is arguably one of the best XBLA games out this year, and on that point it’s also  available multi-platform for PC and PS3. What are you waiting for? Swing and fling your way to your online marketplace and pick this game up, and then pop a chicken or two. No, that’s not some sick euphemism!