Review: Who wants to be a Millionaire: Special Editions

Quiz games are pretty common these days, thanks to the emergence of downloadable content delivery systems. Unfortunately, many publishers use this delivery method to push forward to consumers a product that is of no real quality. In fact, the last quiz game to really deliver a punch was ‘Buzz!’. The ‘Scene It?’ series on Xbox 360 was complete rubbish, and other quiz titles out there haven’t encapsulated what is required to make these games a return winner.

Along comes Who Wants To Be A Millionaire. It has had more comebacks than Charlie Sheen’s coke addiction. Big question is, is it any good?

Don’t ask the audience; ask us!

Let’s cut to the chase; we all know how the format works. You’re asked fifteen multiple choice questions… get them right and you win a million pounds. Heck, this format was sold worldwide and for some reason, even with the biggest prize on a quiz show, it somehow isn’t as entertaining as Deal or No Deal.

This game doesn’t deserve many lifelines…
For those living in a cave, you have three lifelines, which you can use to get yourself out of trouble. ’50/50′ takes away two wrong answers; ‘Phone a Friend’ involves… err… do I really need to explain? Lastly, ‘Ask the Audience…’ right, you get the gist; I’ll move on. 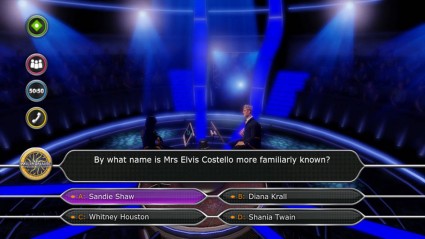 Fifteen questions to a million!

The game starts off with ‘Fastest Finger First’. Good luck answering a lot of the questions though. It appears the developers have made this game for the US audience, with some of the questions specifically based in this region. Pretty dumb idea, since they are making the title available across Europe.

Uglier than Chris Tarrant’s scrotum
The game has had many iterations over the years, and quite frankly this current effort by Deep Silver is one of the very worst on the market. There are no video clips of Chris Tarrant, just some randomly-made character whose facial animations resemble a stroke victim. As for your character, you sit in the dark looking like some anonymous male rape victim from an episode of Panorama. To think, if you play the game long enough you can unlock characters too! 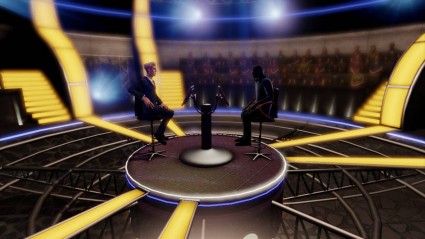 At what age did he touch you?

The presenter welcomes you to the game by walking to his seat as though he had just been tested for colon cancer. His body animations are more woody than Woody Allen. The programmers couldn’t even be bothered to give him proper teeth; instead he looks as though he left his gum shield in from a game of rugby. Do I even have to mention the hair? Needless to say, on every front the graphics are absolutely woeful. No, not woeful… shit! That was the word I was looking for.

You won a million… sniff…
The presenter of this particular iteration of WWTBAM has an extremely big nose. Needless to say, for some reason the presenter will randomly sniffle. Perhaps Charlie Sheen was actually in the audience after all? 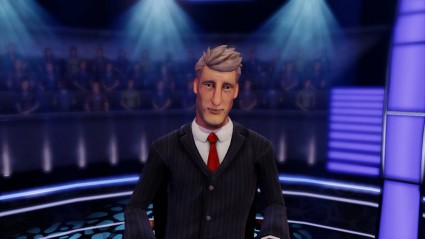 Look at that honk!

Whilst the game offers the background musical score associated with the TV series, it does very little to add to the experience when the presenter utters the same dialogue over and over again, game after game. The same sentences are used in a single game, let alone repeat plays. The presenter even asks you to ‘take your time’ before asking you the question, and his excitement of when you actually win the grand prize is the equivalent of winning a holiday in Rotherham.

What perplexes me even more is the voice actor chosen for the presenter in this game… the same voice actor who is then used again on Phone a Friend. The presenter’s voice sounds more akin to selling a Bakewell Tart or doing the voiceover for a Hovis advert than a game show host. It all feels wrong!

Fastest finger to delete off your HDD
The game does feature multiplayer for up to four people offline. Though, you should be ashamed of yourself if you are even considering putting this game out amongst your friends and family this Christmas. WWTBAM also has an online leaderboard where you get to see the PSN details of those sad enough to play this game long enough to top the charts.

The million-pound question
If you’re a fan of WWTBAM then I recommend buying the interactive DVD version instead. It tends to get released annually and you will get questions that people from the UK can actually answer, and current affair topics will be up to date. WWTBAM is an old formula and it soon runs off to be quite a boring affair. You really feel like the developers themselves got bored making this game. 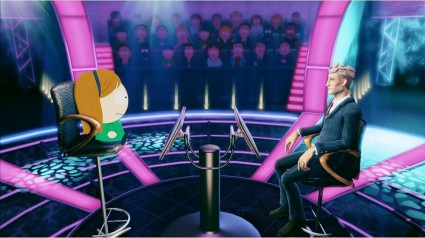 There is a ray of hope, however. There is a ‘Special Editions’ mode which can be bolted on to the current game. You will soon be able to download specific question packs, and one of those will be South Park. It will be interesting to see how much that actually adds to the game. Maybe Stan could vomit over the game show host!