Would you associate a couple of worms with golf? Not unless their guts ended up on the bottom of your driver! The only other association I could make is Tiger Woods, because rumour has it, the woman he cheated with had worms, crabs and other horrible creatures living in her… Eugh! I’ll stop there.

When I first heard the announcement that Team 17 were working on a Worms game that did not actually follow the tried and tested formula, I was a little concerned. Could this be the start of more franchising of the series; what next? Worms Pinball? To my amazement, that has already been done.

So, is the Worms’ venture into Crazy Golf a standard spin-off with no quality, or does it have potential. Let’s give this game a swing!

From the fairway to the coffin!
Tasked with a small number of clubs, it is your duty as a worm to beat your opponents in a standard match play scenario. The career mode itself is based over three of the game’s courses, which each have 18 holes. These courses also have stop-gap challenges from the other game modes found in the game.

Oddly, Worms: Crazy Golf does not run on an average par over the 18 holes, you actually need to hit par or better to progress through the course. The better the score per hole, the better score you get and ratings per hole. For those a fan of PSN trophies, they are easy to get on this game.

2D Golf?
So, what actually makes this game different from other non-realistic golfing titles, such as Golf: Tee It Up and Everybody’s Golf? Well, first it uses the classic 2D worms perspective, so already, visually it is a massive difference.

Then we have the power-ups available to you. A ball that gives you extreme power, parachute attachments, bouncing balls (a free DLC download, which also includes a new course at no cost), heavy ball and time slowdown are just a few of the power-ups you can expect to use. Just don’t expect to see them available to you straight away; you have to unlock them playing career mode. 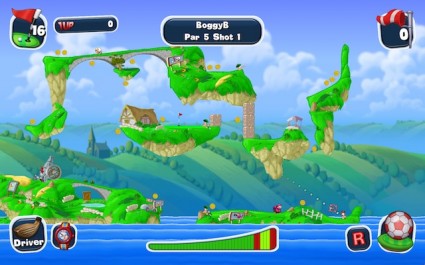 Don't be deceived by the green pastures, this is a tough course!

What also makes Worms: Crazy Golf different to other golf games out there, are the cross-course variables. Teleportation devices, cannons to shoot from, extreme wind and moving obstacles all will help aid or hinder your score.

There are some instant similarities between this game and the classic worms title. The power meter feels exactly at home and if you hit spectator worms they actually die, Thing is, when these worms die, they explode and can kick your ball closer to the pin, getting a hole in one using that method is ultimately satisfying!

If getting a par or better isn’t your bag, then expect the many challenge modes to keep you interested. While heartbreaking for the Welsh contingency, you can actually kill sheep! Nice! You can have a blast at chip-in challenges, target practice and attempt to keep your ball moving as much as possible in ‘keepie ups’; which uses the classic mine weapon in the traditional games but this time to your aid.

Mix the career mode, challenges, level bonuses and unlockable items and the replay value is clear as day.

A lesson in colour
If Team 17 have done anything to make you want to buy this game, it certainly is with their work on the graphics. The courses are beautiful, while also fitting, and while textures are limited, they are undoubtedly sharp. It has a high quality gloss about it that cannot be faulted.

From a carnival, graveyard, desert and farmland, each course differs immensely and helps serve up a new experience every 18 holes.

Characters are nicely animated, whether it be the sheep losing its wool every time it gets hit with a ball, the landscape of the courses, or even the spectators dying when they get hit. Boom! Another gravestone created.

All those token sounds, rekindled
I said that the game draws reference to the original worms games, and it does, From its uniformed art style straight through to the game’s sound, fans of Worms will be instantly drawn to this game.

Squeaky phrases such as ‘Kamikaze!’ and ‘Stupid!’ bring back the familiarity we loved about the original game. Power-ups have satisfying sound-bytes and the BGM for each course is fitting throughout. Nothing irritates here and nothing feels out-of-place.

It’s local or be vocal…
Perhaps the biggest surprise to Worms Crazy Golf for me, was the lack of online multiplayer. The absence of this could only have been a decision made due to time constraints, as there is little rationale behind not considering it at all. So, for all things multiplayer (with the exception of a leader board system) you’re restricted to hot-seat multiplayer. Two of you take turns on a standardised course of your choice, and it is very much a shot by shot affair, however, you’ll have access to all the courses from the beginning and power-ups that are necessary to complete the course. 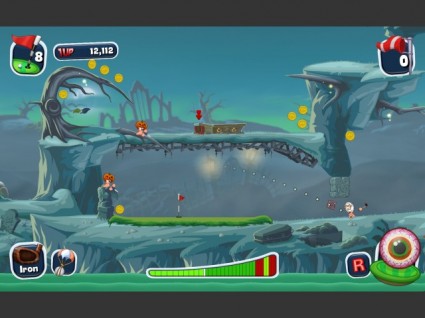 It is fun though, watching your opponent fall by the wayside as you sink that magical eagle. It adds to a rather satisfying experience; albeit when you are social enough to invite friends over. No other multiplayer game modes are available, though the scope to add more via DLC is most certainly there.

Fan pressure could possibly see the addition of online multiplayer, but don’t hold your breath.

The Eagle has landed
Worms: Crazy Golf is certainly no cheap cash in. It is a title that packs much value for money and is damn slick throughout every aspect of the game; I couldn’t find any annoyances at all.

It is fun to play and the par criteria system in career mode means you have to work hard to complete the game’s challenging courses. It’s most certainly worth a swing of your debit card at £6.29. Bargain!