Video-games, for better or worse, often center on power fantasies. The player becomes the focal point of almost every moment of the experience, and the world seems to spring into action around the player’s character. Supergiant Games’ Bastion, released in 2011, offers a unique take on this trope by embracing it wholeheartedly in both presentation and gameplay.

The results are more complicated than expected. Being the center of attention isn’t always the most glorious set of circumstances.

In Bastion, the ground rises to meet your character’s feet as you travel through the game’s richly detailed, painterly environments. I mean this in a literal sense. When your character, the Kid, is first dropped into a new level, most of it is a big, blank expanse except for the tiny area on which you’ve landed. As soon as you begin walking, though, chunks of stone and earth appear and organize themselves into a pathway for you. The world seems willed into existence by each step you take. It’s a bold visual choice that immediately distinguishes the game from others with isometric perspectives; and it looks absolutely rad.

Similarly, your quest in Bastion revolves around recreating (literally, again) the world you inhabit, which has been destroyed by a mysterious event known as the Calamity. In each level, you’ll uncover a shard that you must bring back to the game’s central location and use to remake an entire portion of the civilization that once existed. Much like the ground that appears as you traverse each level, the world at large seems only to exist once you bring it into existence yourself. 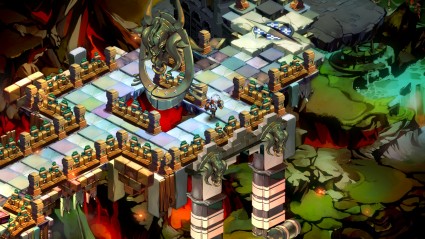 There will be no discussion of bull iconography in this editorial, unfortunately.

This is a particularly keen design choice for a video-game. The feeling of having some sort of supernatural control over a game world should be familiar to most game players thanks to the level of freedom and power granted to most game protagonists. As you upgrade your abilities in most titles, your impact and influence increases exponentially. Bastion appears to take this to a strict, concrete level. The world of Caelondia isn’t even visible until you make it so.

In addition to this, a gravelly voiced narrator echoes each of your actions as you make your way through the game. Even seemingly minor choices become the subject of the omniscient voice’s discussions, and it clearly responds to specific decisions you make that may be different from decisions made by other players. Though the narration’s tone lends an intimate and personal vibe to the proceedings, it also immediately adds an epic atmosphere to the entire experience. Each choice you make feels like it becomes part of a legend that will be passed down for later generations.

With both of these design decisions, Bastion places a premium on the player. The game assures you of your importance with every movement you make. The situation is more complicated than it may initially seem, though. 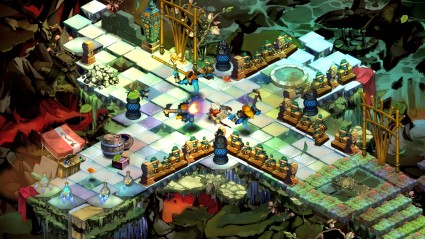 The world waits to reveal itself until the Kid appears, but it isn’t dormant, and what it reveals is not typically welcoming. The Calamity resulted in widespread devastation and death, so the player frequently uncovers a new plot of land just to find that it has been totally decimated. The only living things left in these wastelands are enemies who attack the moment the shadows recede. Travelling through each level involves accepting that each step could lead to another fatal encounter without any way of anticipating what form, exactly, it might take.

The same is true of using the shards you recover to rebuild Caelondia. Each shard unlocks a new level, and each level reveals more destruction. It is the Kid’s responsibility to repair this damage, however, so you must continue to subject yourself to the unknown.

The game’s narration, while incredibly engaging, eventually lends to an atmosphere of loneliness and isolation as you explore each new area. As you head deeper and deeper into the forests, swamps, and ruins of Caelondia, the narrator’s baritone is frequently your only company. It becomes a major signifier of the fact that the Kid has no allies out in the field and must accomplish something enormous without much assistance. 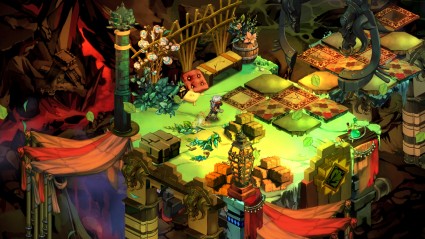 These elements highlight something critical about these power fantasies that games sometimes overlook. The responsibility that goes with being the biggest and baddest one around can be a dangerous and isolating burden. The world may be yours for the taking, but it is not always eager or willing to be claimed. Friends can be difficult to find.

Spider-Man learned about the perilous relationship between great power and great responsibility a long time ago, but Bastion makes a good go of it, too. It uses bold aesthetic and gameplay choices to highlight the incredible importance of what the player is trying to do, but these same design choices also reveal the murkier, uglier side of our superhero fantasies. Very few things come without a price, and Bastion intends to prove it to you.