Fifteen minutes of something else entirely

Fifteen minutes is not a particularly long time, especially in gaming. In many modern games, fifteen minutes of play won’t get you past the opening titles and tutorials. However, fifteen minutes is also the entire duration of Blendo Games’ Thirty Flights of Loving, a 2012 independent release about a heist that packs a dense, emotional, character-driven narrative into just a few short sequences. By subverting many of gaming’s narrative conventions, Thirty Flights of Loving constructs a world and a storyline that far exceed the constraints of its short length.

This is not, strictly speaking, a traditional video-game experience.

One of the most profound but subtle ways in which Thirty Flights of Loving undoes traditional game conventions is with its treatment of the relationship between the player and the protagonist. Many games equate these two things, even if the main character is given a name and thoroughly-developed backstory. In addition to giving the player control over the main character, games often find some reason (memory loss, first time in a new world, whatever else) for all of the exposition and explaining that needs to occur to get the player up to speed with the game’s events. Through these things, the player and the protagonist become much closer to equals.

Thirty Flights of Loving throws both of these elements out. Rather than directly telling the player anything about the current situation, it leaves almost all the details to the player’s inference. As you move your character through the game’s set-pieces (a secret hideout, a busy airport with an injured colleague, an apartment complex during a dinner party), you witness events as they happen and must consider the implications. Relationships between the three main characters aren’t explicitly stated and the hard facts that most games dole out through tutorials and cut-scenes are non-existent. 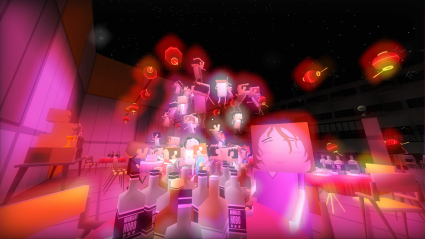 A public service announcement regarding the effects of alcohol.

Related to this is the removal of true player agency. Thirty Flights of Loving operates much like a guided narrative, as the player has no real impact on or ability to change the events that occur. In most cases, the game simply waits for you to move the protagonist into the right spot and then proceeds onward. This seriously contrasts with the movement towards the purportedly all-powerful avatar of series like the Elder Scrolls, Mass Effect, Grand Theft Auto, and others, which focus on the player’s ability to shape the world and story as they play.

Even more interesting than the lack of agency, though, is the effect it has on the player as the game’s story unfolds. Because the events are out of your control, you may find yourself increasingly at odds with the decisions that the character you control is making and realizing things about him that are less than ideal. Although you are moving the character into position, you aren’t directing his implied words or actions, and this creates a serious distance between the player and protagonist. In a gaming landscape that frequently allows for complete customization, this is a bold choice. The player is mostly an observer rather than a participant, and the main character knows far more and is in far more control than the player.

This creates a unique, compelling dynamic between player and character. Although you are not in total control, the simple act of moving the character through the game world creates a visceral connection between the player, the supporting cast, and the world they all inhabit, allowing for a very different emotional experience than if this had been a short film. 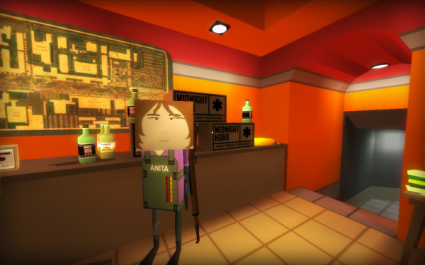 Just another day at work.

Much more immediately noticeable than this, though, is the game’s manipulation of time as a narrative device. Most of Thirty Flights of Loving takes place out of sequence; there are frequent, abrupt cuts between events that occur at completely different times in these characters’ lives. Many different events are portrayed in this game’s short playtime thanks to its willingness to throw the player all over the timeline. The game’s world feels far more developed and more robust, and the characters’ relationships seem far more realistic, due to the game’s non-linear approach.

It’s certainly a jarring experience on a first run, but as the game progresses, you become more accustomed to its non-linear treatment of time and you become much more aware of little details that might give clues about what’s really happening between these people and the circumstances they’re in. Subsequent playthroughs become even more revealing. The story becomes some sort of puzzle that the game teases at but never fully opens up about, and your emotional engagement with the characters and their world means that you’ll find yourself trying to figure out more and more of it, looking desperately for some closure.

These are pretty daring moves for a game of this size and they’ve definitely been divisive. I still don’t know exactly how I feel about Thirty Flights of Loving, but I am impressed with the game’s willingness to try new things. It achieves a whole lot despite (or maybe, in part, because of) its short length, and it uproots a lot of the things we’ve grown complacent about when it comes to narratives in games.