I’m not who you think I am

I take great pride in my affiliation with the Dark Brotherhood. Judge me all you want, I can honestly say that between Oblivion and Skyrim, they have given me the most satisfaction while playing the Elder Scrolls games. Perhaps it’s their mysterious nature. Perhaps it’s the whole cloak/dagger aspect of their approach. Perhaps it’s being stowed away in some underground sanctuary, acting out a sordid religion in secret, or perhaps I just like murdering people.

Games allow us to do crazy things, and the more immersive and real they become, the more choices we’re given, the more our actions are truly defined by us within that game. When the player is actually put on the spot and asked to think about what they’re about to do, assessing the consequences of these decisions,  and they choose to kill virtual avatars in compromising positions, what does that say about their genetic makeup?

Perhaps the tabloids are right. Perhaps games do encourage us in ways they shouldn’t.

Multi-choice, open world experiences are getting more and more popular all the time. Skyrim continues to sell extremely well in the UK Charts, and Mass Effect 3 is one of this years most anticipated games. These games challenge players in ways the likes of Battlefield and Call of Duty never will. They thrust numerous immeasurable tasks on the player’s shoulders, have you interact with the type of people you’d never rub shoulders with in real life and get involved with cults, gangs and syndicates of a shady nature.

Essentially, games give us a chance to lead a new kind of double life.

Of course, this is all happening in the virtual realm, and while the game makes us deal with consequence and we do have to make decisions, the only thing that is impacted is the game in front of you. Not your next-door neighbour, not your cousin or Jeffrey Mills from the other side of the world. Just the game.

Still, tabloids, medical practitioners and psychologists think it runs deeper than that. They say that in order for a person to reach such macabre decisions there must be a hidden desire within them to do such a thing. When playing these games, they are releasing a part of themselves which is repressed, concealed behind layers of what a person perceives to be right, and the way they should act in everyday society. They claim that when playing games, the real person is exposed, much in the same way as it can be when you take a blot test, and the hidden traits are exposed for all to see.

So, if that is the case, just because I enjoy throwing a hood over my head in Skyrim, talking and taunting my victim before I stab them in cold blood by tapping a button on my gamepad, and then running away from town in the hopes of not being locked away, that I’m just as likely, if pushed, to do the same in real life. That I have repressed the desire to commit these acts in my everyday working life, because I’m scared of a consequence, or being judged by the law and those close to me.

Games present radical, fictional scenarios that will forever be a distant dream and never synchronise with the reality you and I face in our everyday lives. These situations will never happen to us, therefore we’ll never need to make these decisions, therefore when we’re supplied with three or four choices (where it’s entirely possible none of them would be applicable to our real reaction anyway) then it cannot be compared to what happens in our everyday lives.

Reality isn’t as black and white as to class you as a paragon or renegade when you make one sole decision, but Mass Effect is. If you kill someone in Skyrim, you can pay off your debt to the guards, and they’ll forget all about it. Unless you’re Rupert Murdoch, or a star in the Premier League, that’s not an out for you. 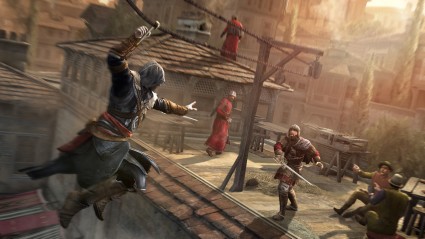 I wouldn't do this even if I could. Even though it'd be immensely cool. Am I right?

Surely, if people think it’s affecting our lives so much, that says more for the amazing writing within games, and how these tests and challenges set before us, are engaging our brains in ways psychologists never thought was possible. Surely that says more about the gripping, compelling fiction we have at our fingertips today, and how amazingly detailed, and wondrous these other-worlds are. Surely that’s the largest possible compliment you can pay these ingenious writers who give whole background stories to new races, and breathe life into alien-looking worlds.

My plea? Stop badgering games. Stop trying to pick holes and find faults. Stop trying to blame all the world’s problems on the back of an industry which is still in its infancy, still expanding, and still trying to keep a head above water in this difficult economic climate. Perhaps sometimes developers take things too far, perhaps some content within games should be moderated and observed more closely before release. That’s an arguable point, and one for another time, but the fact is, they do more right than wrong.

They keep kids off the streets, stop them from committing real crimes. They encourage us to look at the good things in life as much as the bad. They weave amazing stories that don’t fall for the same telegraphed twists most movies have adopted over the last few years. The world is a dark place, turning on the daily news every morning is indicative of that. It’s also a much more violent place because of war, because of dictatorship, because of mental illnesses which cause people to do unspeakable acts which could never be expressed or dreamed up in any fictional world.

Besides, not every decision in our games is a bad one. For every occasion a person has to decide to kill someone, they are also faced with the decision to help a young boy who has lost his parents, or prevent someone from being overwhelmed by a life-threatening illness. Yes, the world is a dark place, and games have to virtually recreate that in order to make their narrative arcs even slightly identifiable. In order to keep people hooked, they can’t expect them to get connected with pasty white unicorns and pretty rainbows.

I may be a murder in Skyrim, I may Hail Sithis and as Listener, take my orders from the Night Mother, but the moment I turn off that game, I don’t draw a ring of fire in my living room and pray to fictional demi-gods for a sign. I don’t roam the streets looking for the first person I can find so I can kill them. I don’t drink a cup of blood in order to settle my stomach before bed. I wash the dishes, I brush my teeth, I lock the door and then go to sleep.

Tabloids, psychologists and doctors can judge me all they want, but I’m not under any of your categories, nor do I mould into any of your stereotypes. I play games for fun and I experience them as I please. There’s no more to it than that.