Platinum have carved quite a name for themselves in the last few years. Exploding on the scene with Bayonetta, the stiletto-shooting witch, the company have since gone on to work on some cult classics, such as Vanquish, Anarchy Reigns, and now Metal Gear Rising: Revengeance.

It’s been over five years since the last major instalment in the Metal Gear franchise, and only the second to feature Raiden in a lead role. Did Platinum Games help Konami to learn from the mistakes of Sons of Liberty? Can we ever come to accept Raiden?

It’s been four long years since Liquid Ocelot’s tyrannical reign was brought to an end. Characters have moved on and relationships developed. Yet Metal Gear Rising doesn’t really go into MGS4 details. Yes, there are references and yes there are links, but if you’re wondering what’s become of Solid Snake, I’m here to disappoint you. That will have to wait until The Phantom Pain.

This story is focused on Raiden alone, and that’s the journey players will take. He has been hired as a contractor for a security firm. The work pays well and he needs work to keep his family life with Rose going. He also happens to be good with a blade, so there’s that.

His latest assignment sees him protecting the Prime Minister of Africa, and the game opens with Raiden sat at the back of the limo, conversing openly with the lead politician. Raiden is trusted with great responsibility, and to him, this seems to be a routine, walk in the park, when suddenly a terrorist cell intercept. Carnage, inevitably, ensues.

Fortunately for us, Raiden decides he’s still got the fighting itch and comes back, equipped with thicker armour, meaner weaponry and a burning rage to right previous wrongs. 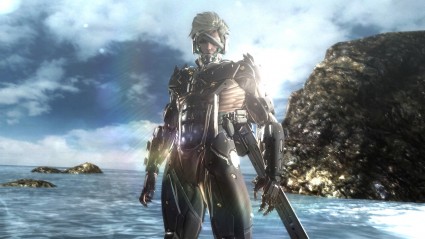 Raiden gets all the girls in this bad-boy

Shish-ke-bob bad guys
Oh, man, Metal Gear Rising’s swordplay is damn good fun. Just writing about it is making me want to play. Yes, the button configuration is simplistic. Low Attack, Hard attack, ninja run and defend, but there is a surprising wealth of combinations and abilities that can be pulled off and squeezed out of such a small layout.

Like Bayonetta before it, you’ll never feel completely limited in control, although the button-mashing definitely produces a familiar rhythm across the game’s six levels.

Blade Mode, activated by holding L1, is where the game separates itself from the rest, however. Once in this mode, players can hack at away at anything an innumerable amount of times by moving the analog stick from side to side, up to down, angle to angle. You can make butchering an art-form with Raiden’s bone-cutting strikes.

Rising is full of dynamic, pulse-pounding set-pieces, and crazed action that continuously catches you off guard. Facing down over-sized Metal Gears by striking through their legs, cutting police cars in half. All possible while wearing a cowboy hat.

Raiden also spends much of the game in company of Blade Wolf. The sidekick is a mechanical canine with a taste for action, and he will get actively involved in Raiden’s fights. While the game doesn’t make full use of this relationship from a gameplay standpoint, both characters share some interesting dialogue that helps develop both characters in unexpected ways.

In addition to the central campaign, Rising is also full of VR missions that will surely be used to expand the game with future DLC. The missions are essentially tutorial missions, but there’s the opportunity to earn medals and compete against friends’ times. They’re highly reminiscent of those seen in Metal Gear Solid 2. Unfortunately, however, they don’t really test the mettle extensively, and are only used in bare-bone form to serve as a more interactive and engaging tutorial.

I enjoyed the action in Rising and despite only being 6 levels, the game is about the size it should be. Any more, and it would be long in the tooth. In Q1, we’ve already seen several major third person action/adventure titles, and many might wonder whether MGR:R feels fatigued because of that. Fortunately, the game has a distinct enough identity that it manages to keep itself away from familiar stigmas, and does its own thing quite nicely. In fact, the game still manages to feel very Metal Gear-esque, despite the obvious changes. 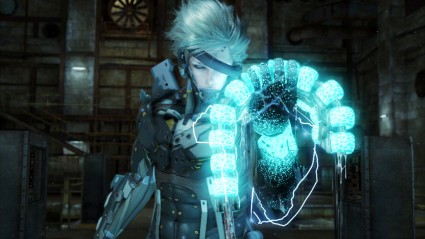 You look a little pale, Jackie
Metal Gear Rising is the definition of an end-of-cycle current gen release. This game has been designed to max out current-gen hardware and it benefits from strong HD, bright, flashing lights, huge set-pieces and deliberate facial expressions.

The best part? The game rarely suffers from slowdown and manages to keep a brisk, back-breaking pace throughout. Yes, the loading screens do pop up and slow things down just slightly, but on the whole, the game is seamless.

Rising is over-the-top action at all times and it doesn’t relent or try to be anything different. The game continues to look great, whether the screen is filled with explosions and gore, or if you’re just running through the neighbourhoods, heading towards your next objective.

Stand and fight
The score in Rising is a real delight. During crucial moments of the game, heavy rock music kicks in and accompanies Raiden’s fast and furious strikes. It’s not quite to the same tone and pace of DmC, nor is it quite as energizing, but it’s always appropriate to the action on-screen and suitably enhances the overall experience.

The game is, of course, fully voice-acted, and Raiden’s original voice actor resumes his duties from previous games. That’s not to say any of it will make much sense. Even though this isn’t a 100% Kojima vehicle, it still manages to baffle and perplex on its way to the conclusion. It’s also not the best acted game you’ll play this year, many of the expressions are over-emphasised or underplayed. Still, it’s distinctly Metal Gear and that works for me. 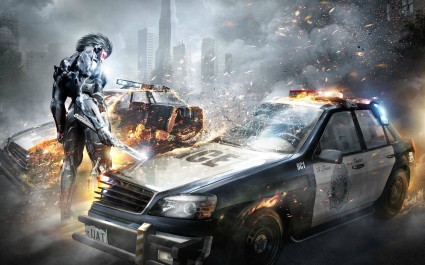 Rose told Raiden he wasn’t allowed to buy a PS4

Hacked and Slashed
There’s an infectious charm about Rising. Yes, it’s 80% borrowed from just about every other game in the genre, but that extra 20% really turns the game into something quite different. The Blade Mode is fun to keep going back to, and the familiar Metal Gear components are there, such as the Tac-Con and the death-screen exclamations. Rising exceeded my expectations and really delivered an entertaining end-product.

That said, once you’re over the Blade Mode and combat as a whole, and you’ve breezed through all the VR missions with flying colours, the replayability for the game is non-existant. It’s a game you may come back to in a few years time when you get the urge to test out the combat all over again, but generally speaking this is a once (maybe twice) through game at most, and it’s a relatively short game to begin with.

So, no, Rising is not a bad game. Not at all. In fact, it’s one of the more entertaining titles I’ve played this year, but it’s soon over, and you’ll soon be looking for a new challenge.

Enjoy it while it lasts!