As a long-time Silent Hill fan, I jumped on Silent Hill: Downpour when it was released. It was quite horrifying, but what scared me most wasn’t related to the plot, or the gameplay.

It was just another apartment in the town, one of many I had explored. Inside, I hoped there would be items to find. What I found was an exact replica of the haunted Apartment 302 from Silent Hill 4: The Room. Murphy did not react. Yet I, the player, immediately panicked and gave a scream, shocked to see one of the most terrifying places in the series out of nowhere. That is a very powerful usage of dramatic irony.

Irony, in terms of literature, is when the audience knows something that the characters or the narrator of the story do not. This knowledge creates emotion in the audience, either by raising the level of suspense or feeling of drama, or perhaps by making them laugh. An example would be Shakespeare’s Romeo and Juliet: the audience knows that Romeo is just sleeping, not dead, which makes Juliet’s suicide all the more horrific.

In games, irony can be used in a similar fashion in cut-scenes and dialogue. A good example of this is Portal 2. Presuming the player has played the first game, Portal 2 sets up a lot of drama and humor based upon audience knowledge. When Wheatley is telling Chell what happened in the first game, the audience will obviously recognize that Chell – and the player – already knows these things. She was there! And when Wheatley introduces GLaDOS, the tension certainly rises, as the player knows exactly what this machine is capable of already, without him having to warn them. The gameplay and interactions with Wheatley set up scenes in the second game which create ironic meaning if the player has already beaten the first game. 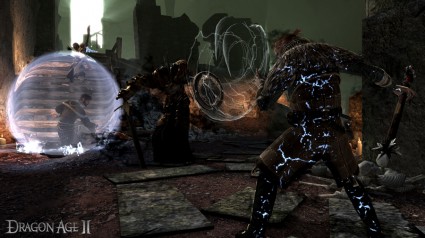 Some characters, like Anders, have dialogue which has extra meaning for gamers who played Awakenings.

Sometimes, there is a feeling of irony to a situation involving extra content, such as side quests. Take the Dragon Age series. In the second game, there are multiple instances of characters from the first game making cameos, or in the case of Isabela, becoming companions. When a player who has played the first game sees these scenes, they bring extra knowledge to the scenario that Hawke and Company don’t have. For a romanced Zevran, for instance, he has dialogue that hints at his romantic affiliations for the warden. These lines mean something to players that have little to no meaning to Hawke.

These sorts of scenes only exist for gamers who have uploaded their previous saves to the game. The same can be said of one of perhaps the most famous instances of irony in gaming: Metal Gear Solid. In this title, there is a character called Psycho Mantis, who displays his psychic powers by reading the player’s memory card. What is saved on the card is then mentioned by Psycho Mantis. None of the information has any relevance to Snake at all, but the player will recognize it. This scene only exists if the player has that saved data, though. In gaming, there exists a level of irony which is unique to the player and their gameplay experiences, tailored to their history, which is unlike anything found in movies, books, or plays.

Irony is typically involved in situations in which a character acts or speaks in a way that implies a lack of knowledge, knowledge the audience has. Though in games, the player has direct influence. In gameplay, irony can be created without any involvement from the characters in the game, or without a cut-scene playing. The scene I described in Downpour is the perfect example of a scene of intense terror which required no dialogue, no movie, nothing but my choice to climb into the apartment. Games have the capability to create feelings of irony solely involving the gamer, and the combination of mechanics and environment in the game.